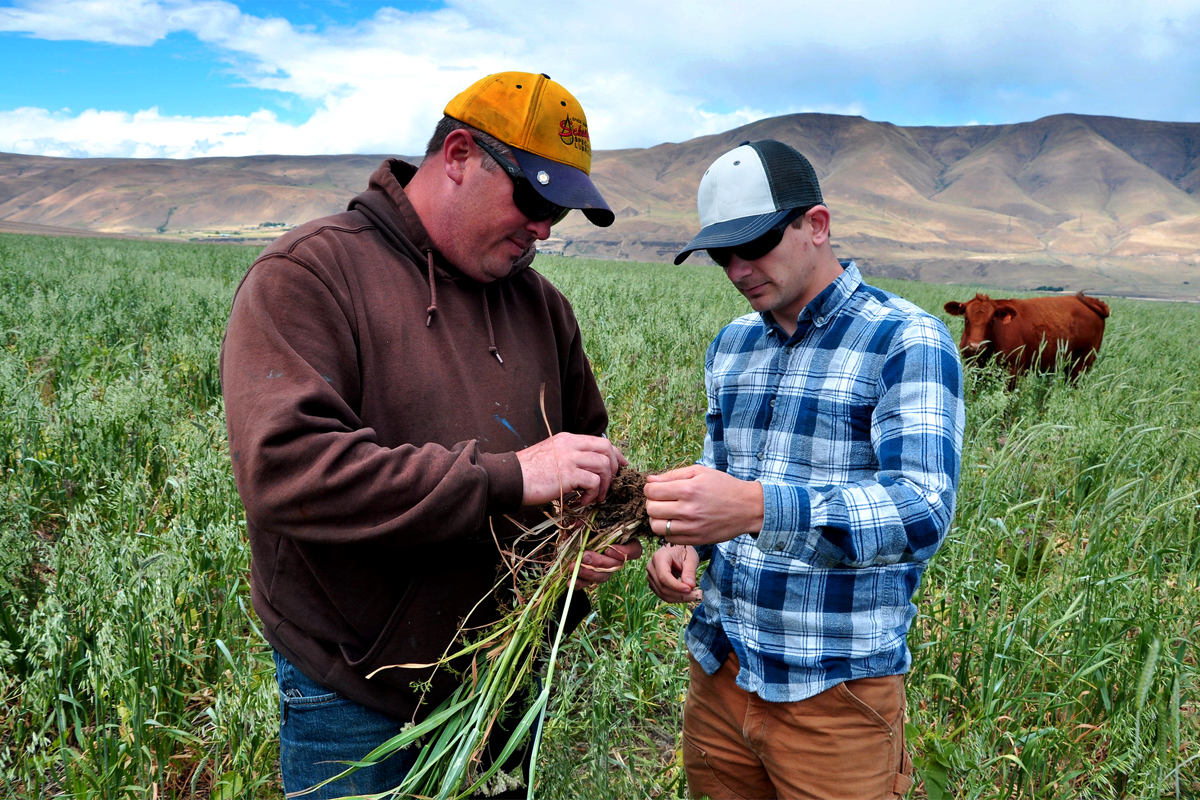 The following is written by CalCAN Policy Director Jeanne Merrill and re-posted with permission from Civil Eats. Read the article where it was originally posted on Civil Eats.

Farm country is abuzz about the latest in carbon market opportunities. Boston-based agtech company Indigo Ag announced in June that its Terraton initiative will pay farmers $15 per metric ton for the carbon that they store in their soils and in trees on their farms.

The company, which has raised over $600 million in investors since it was founded in 2016, says it intends to remove one trillion tons of carbon dioxide from the atmosphere in part by using a patented microbial seed coating and digital technology that allow the company to monitor and track soil carbon and on-farm emission levels.

A spokesperson from Indigo Ag says that the response has been overwhelming, with farmers signing up millions of acres in the United States and abroad. He added that carbon credit buyers—large retailers, food companies, and more—are also knocking on their door, wanting to purchase the carbon credits generated by farmers committing to the company’s carbon program.

This move toward reviving a new form of voluntary carbon market prompts a number of big questions. What does it mean for those who want to advance sustainable agricultural solutions to climate change? How does it fit into the larger landscape of efforts to transform farming and address our climate crisis? And will it ultimately pay off for farmers?

The Chicago Climate Exchange was the first national effort to put a carbon market in place. The Exchange set up a market for offset credits generated by farmers and ranchers whose practices reduced greenhouse gas emissions and increased carbon sinks on agricultural lands—practices such as rotational grazing, conservation tillage, and prairie plantings. Companies and local governments would buy those credits as a way of offsetting their own greenhouse gas emissions.

But by 2010, the exchange had collapsed. The carbon market was swamped with offset credits from willing farmers, but it didn’t have enough buyers. As a result, the price of the carbon credits went from a high of roughly $7 to just 5 cents per metric ton of carbon. In December 2010, the Chicago Climate Exchange closed its doors, leaving farmers and ranchers without support for their carbon farming efforts.

The next effort to create a carbon market came from California. In 2012, as part of its climate change law, the state launched a cap-and-trade program, requiring large greenhouse gas emitters to participate. Now, seven years later, there are still very few ways for farmers to earn carbon credits, and they include installing dairy digesters and taking up certain rice management practices, both aimed at reducing methane emissions. But with a low carbon price and high transaction costs for farmers, only the dairy digester projects have sold carbon credits, largely because of other state financial support for the projects. Meanwhile, the state’s rice producers have stayed out of the California carbon market.

That isn’t the end of the story for climate-friendly agriculture efforts in California. Instead of relying on the carbon market, starting in 2014, the state launched its first grants-based programs, using revenue generated by the cap-and-trade program to pay farmers and ranchers who take up practices that reduce greenhouse gas emissions and increase carbon sinks. California became a pioneer for what are now called “Climate Smart Agriculture” programs. The programs bypass the complexities of the carbon market, including the price volatility, but face a different funding challenge.

The first Climate Smart Agriculture programs focused on three areas: drought and farm resiliency, farmland protection from urban sprawl, and the development of dairy digesters. Grant funds were made available to farmers to improve their irrigation management systems to save water and energy and reduce related greenhouse gas emissions. Recognizing that protected farmland on the urban edge could reduce sprawl and greenhouse gas emissions from cars, the state also invested in conservation easements to permanently protect agricultural lands at risk of development. Finally, looking at potent methane emissions from dairy manure, the state launched its dairy digester program to reduce emissions from large dairy farms.

The second wave of state investment in new Climate Smart Agriculture programs came in 2017 with the creation of the Healthy Soils and the Alternative Manure Management (AMMP) programs. Under the former, farmers and ranchers are paid to practice soil management and farmscaping practices that sequester carbon. The latter focuses on dry manure management for dairies and other livestock operations to reduce methane emissions, such as composting manure.

Farmer response to the state Climate Smart Agriculture programs is strong, with twice as many farmers applying that some program funding can support.

The Healthy Soils program has seen farmer interest grow despite concerns from some that payment rates—what farmers will receive for new practices—are too low and the application too complex. The average Healthy Soils grant is a little over $56,000 for three years. Total greenhouse emissions reductions associated with the program are nearly 40,000 metric tons of carbon dioxide equivalent, which is the equivalent of taking 8,400 cars off the road.

New this year will be roughly $2 million in state investment in technical assistance, in hopes of helping those who typically do not have the resources to participate in state programs, such as small and mid-scale farmers and farmers of color.

The total climate benefits of the Climate Smart Agriculture program are considerable. Greenhouse gas emissions reductions across the programs is more than 39 million metric tons of carbon dioxide equivalent, which is the equivalent of taking 8 million cars off the road.

The biggest challenge for the Climate Smart Agriculture Programs has been consistent state funding for them. In the latest state budget, the legislature and Governor Newsom cut funding overall for Climate Smart Agriculture with transportation and other urban climate programs out competing the agriculture programs. Total cap-and-trade revenue investments in Healthy Soils, The State Water Efficiency and Enhancement Program (SWEEP), and AMMP—three program priorities for my coalition of sustainable agriculture groups—in the 2019-2020 budget will be $35 million, down from over $60 million in the current fiscal year.

Will the return of robust investment in the voluntary carbon market, as proposed by Indigo Ag, speed up the adoption of climate friendly agricultural practices in the U. S. and internationally?

Maybe. It will depend, in part, on consistent funding as well as farmer interest in the program. Indigo Ag is offering a stable price for carbon—$15 per metric ton of carbon dioxide equivalent (MTCO2e)—a number that they say is not subject to the vagaries of the carbon market. And the strong farmer sign-up for the program demonstrates that the new initiative has financial appeal.

But the Indigo Ag carbon program is not a repeat of past voluntary carbon markets. It has its own twist. Their proposition is in part dependent on farmers buying their proprietary seed coatings, which use microbes that Indigo Ag says will help farmers improve soil fertility and increase carbon sequestration. Farmers do not have to commit to buying the coated seeds to get into the market, but they will see better returns, says Indigo, if they do.

One of Indigo Ag’s technical experts described it to me as “a layered approach.” Farmers can opt to use the seed coatings and they’ll also have an additional layer of help from a team of agronomists and the latest in Big Data analysis to support their participation in the Indigo Ag carbon initiative.

This potential layering sets the Indigo Ag approach apart. It views its entry into the soil microbe/seed treatment business and the carbon market as a disrupter. But who will benefit? Will the company scale up with the intention of being bought out by a larger ag or tech industry player—much like Climate Corp sold to Monsanto and Blue River sold to John Deere?

Furthermore, will farmers be left holding the bag if the initiative collapses like the Chicago Carbon Market did? We will likely have to wait to learn the answer to these questions.

State efforts, on the other hand, like those in California, can avoid the complexities of carbon market dynamics that can create market winners that are often the large industrial producers and sellers, and reach a diversity of farmers, including small and mid-scale farmers and farmers of color, who are often left behind in these market initiatives because of a lack of capital and technical assistance.

State initiatives can also offer a better value for farmers to meet their basic costs in transitioning to new farming methods. For example, one Healthy Soils grant recipient, a farm in Butte County, will sequester 110 metric tons of carbon and will receive a grant worth $64,000 from the state. Under Indigo Ag’s carbon program, the same farm would receive $1,650 for those same 110 metric tons of carbon sequestered. That’s a stark difference.

Of course that comparison only holds water if we can maintain and grow state-level efforts. And the good news is that several other states, including New York, New Mexico, Massachusetts, and Vermont, appear ready to create new healthy soils programs. But to truly ensure that these efforts invest adequately in sustainable agricultural solutions to climate change, broader urban and rural coalitions will have to be built to demonstrate to urban legislatures the benefits of climate friendly agriculture beyond the farmgate and their rural communities. Our food security will likely depend on it.