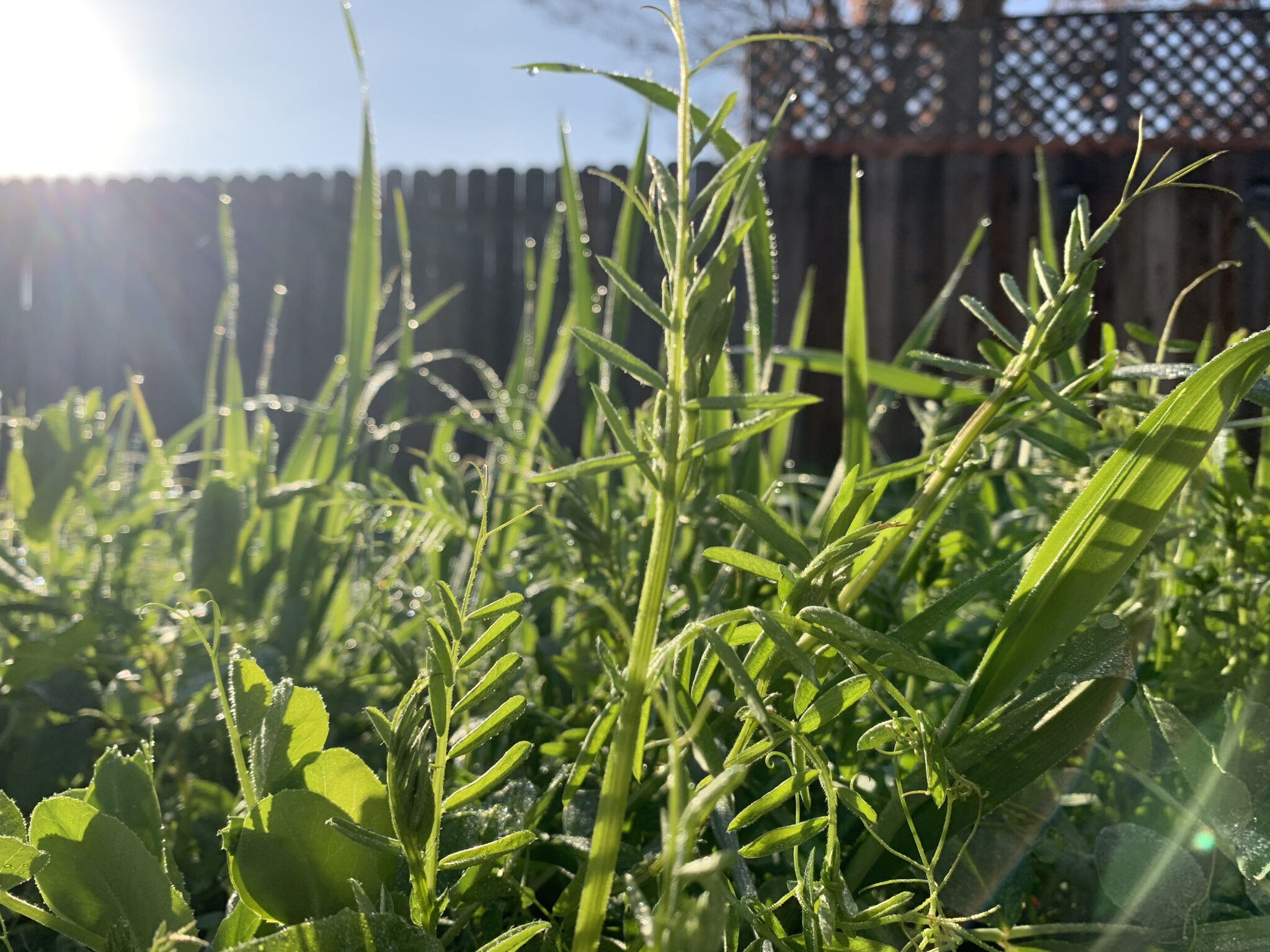 Early morning sunlight passes through the leaves – nature’s original solar panel – of the winter cover crop in my garden.

Inspired by four workshops at CalCAN’s recent summit, I have found myself ruminating lately on the role that solar energy could play in mitigating the impacts of drought, extreme heat, and the Sustainable Groundwater Management Act, while also accelerating decarbonization of our energy system and giving farmers much-needed alternative income streams. As we near Wednesday’s winter solstice and perhaps feel a heightened sense of gratitude for the sun and longer days ahead, I figured I would share these reflections for your consideration and would invite you to share your own.

One way farmers can mitigate the impact of higher costs of irrigation during droughts is by installing solar to power their pumps. In the summit’s “Practical On-farm Drought Management Strategies” workshop, Kevin Greer of Tehama Resource Conservation District talked about the challenge of increased water pumping costs during droughts. Kevin, who manages a mobile irrigation lab, described how diminishing surface water supplies have led to increased groundwater pumping and reduced groundwater tables. As a result, farmers’ irrigation pumps have to use more energy to lift water from greater depths and maintain adequate pressure for micro and drip irrigation systems to work efficiently.

To mitigate the increasing energy costs associated with groundwater pumping, Steve Fukagawa, a CalCAN Farmer Advisor and stone fruit and raisin grower in Kings county, installed solar panels to power his irrigation system with the help of a State Water Efficiency and Enhancement Program grant. In the workshop, Steve credited his solar panels, along with other strategies like deficit irrigation, with significantly reducing his irrigation costs.

Steve is one of a growing number of farmers in the state utilizing solar. The number of farms in California reporting to have solar panels increased from roughly 5,500 in 2012 to nearly 14,000 in 2017. Small and mid-scale farmers with solar-powered pumps we’ve interviewed have observed cost savings in the range of thousands of dollars per year. You can read their “Conserving Water & Energy” and “On-Farm Renewable Energy” stories here.

There’s another way farms could potentially save money, tap into solar power, and improve grid reliability – through irrigation load-shifting (aka demand-response) incentive programs. Arian Aghajanzadeh of Klimate Consulting, who has published research on this topic, spoke briefly about the potential of these programs on the summit’s “Modernizing California’s Ag Water Delivery Systems” panel. By shifting irrigation-related energy use away from peak demand hours (typically between 4pm-9pm) to times of day when more renewable energy is available on the grid, farmers can get both cheaper and less carbon-intensive energy.

A pilot project funded by the California Energy Commission demonstrated that the use of automatic irrigation scheduling systems in response to energy market signals could shift 80 percent of peak demand for irrigation pumping load, which would eliminate 1.8 percent of total carbon emissions from California’s power generation – a reduction that can be achieved at a lower cost than battery energy storage or load shift from many other sectors.

Solar panels may also help certain crops and livestock better withstand warming temperatures while also creating a secondary revenue stream for farmers. As we heard about in the summit’s farm tour, farmers are increasingly experiencing the impacts of extreme heat, with both crops and livestock suffering from heat stress. Dr. Majdi Abou Najm, a Professor of Soil Biophysics from the UC Davis Department of Land, Air, and Water Resources, gave a lightning talk at the summit on agrivoltaics, which refers to solar arrays over agricultural fields, orchards and pastures, as a potential multi-benefit solution to this challenge. Citing promising results from his recently published study and a growing body of federally-funded research, Dr. Najm suggested we are on the verge of a revolution in food and energy co-creation. In places like Arizona and Colorado, pilots are finding that agrivoltaics can improve yields in certain crops like tomatoes and peppers while reducing water needs, increasing soil moisture, creating cooler microclimates underneath the solar panels, and establishing a new on-farm revenue stream.

For California farmers to take advantage of this opportunity, however, Dr. Najm says more research and pilot funding are needed to test agrivoltaics in California’s unique specialty crop systems and various microclimates. He is not alone in calling for more research and pilot funding. American Farmland Trust recently released its Smart Solar Principles, which calls for growing agrivoltaics for agricultural production and solar energy. And two weeks ago, American Farmland Trust, the Community Alliance with Family Farmers, and CalCAN submitted a comment letter to the California Energy Commission calling for it to include agrivoltaics projects in its new Climate Innovation Program, which has $500 million.

Zooming out from the farm to the irrigation district, there are more ways that harvesting solar energy can reap multiple benefits, including water conservation. Christine Gemperle is a CalCAN farmer advisor and almond grower in the Turlock Irrigation District’s service area. In her remarks for the summit’s “Modernizing California’s Ag Water Delivery System” workshop, Christine shared her excitement about Project Nexus, the nation’s first deployment of solar over canals. The project, which is a collaboration between Turlock Irrigation District, the CA Department of Water Resources, UC Merced, and Solar AquaGrid, will include solar panels over the canal next to Christine’s farm. These panels will both reduce evaporative water losses and aquatic weed growth in the canal, while also providing renewable power to the irrigation district’s customers – all without taking any agricultural land out of production.

A recent UC Merced study, co-authored by CalCAN science advisor Tapan Pathak, found that if such pilots were scaled across California’s vast canal systems, the state could achieve annual water savings of 190,000 acre-feet and generate 13 gigawatts of solar power – roughly half the projected new capacity needed by 2030 to meet the state’s decarbonization goals.

So what do all these solar innovations mean for the future of agriculture in the San Joaquin Valley? Consider this: The US Department of Energy projects that 10.3 million acres of solar

will be needed to decarbonize the nation’s electrical grid by mid-century, with 90 percent of the utility-scale solar capacity likely to be installed in rural communities. According to a recent Public Policy Institute of California (PPIC) report – Solar Energy and Groundwater in the San Joaquin Valley – planners have identified the San Joaquin Valley as a place with high potential to build more solar, with 3 gigawatts of solar already developed and substantial additional developments being constructed in places like Fresno, Kings, and Kern counties. SB 100, which established a goal of achieving 100 percent renewable energy in California by 2045, and related legislation is likely to spur an unprecedented build-out of solar (at least 70 gigawatts) in California.

At the same time, groundwater basins must achieve sustainability under the Sustainable Groundwater Management Act by 2040, which the PPIC concluded will likely necessitate taking half a million acres of agricultural land out of intensive irrigated production in the San Joaquin Valley. While some of that land may convert to water-limited or dry-farmed crops (e.g. lightly irrigated or rainfed winter grain and forage crops) and some land will surely be put into habitat restoration efforts, it is inevitable that some land will be developed for solar as well.

How to transition that retiring agricultural land strategically (as opposed to haphazardly), sustainably (to prevent dust and noxious weed challenges), and justly (for farmers and farmworkers who may lose their livelihoods) was the focus of much of the CalCAN summit’s workshop on the “Future of Land and Communities in the San Joaquin Valley.”

Nataly Escobedo Garcia from Leadership Counsel for Justice and Accountability emphasized that the communities she works with are interested in solar, but only if they have meaningful input into projects around their communities and the workforce development and transition paths to benefit from solar jobs. Adam Livingston from Sequoia Riverlands Trust emphasized the critical importance of keeping as much of the San Joaquin Valley’s ag land in production as possible given its regional economic impact and outsized role in providing the nation’s fruits, nuts, and vegetables. To achieve beneficial transitions and avoid harms, Caity Peterson of the PPIC underscored the importance of cooperative planning efforts, reimagining crop portfolios, and flexible regulatory approaches. Their insights are critical to keep in mind as we work towards an equitable transition to groundwater sustainability and a decarbonized power sector.

Longer Days and More Work Ahead

As I gear up for another trip around the sun, another growing season, and another legislative session, it is clear to me that harvesting more of the sun’s energy in the form of food and energy will be key to achieving our vision of a climate-resilient and climate-beneficial agriculture. How we do that, exactly, and how fast has yet to be determined. But I’m excited and hopeful to find out. Feel free to share your solstice musings with me! Email me at: brian[at]calclimateag.org.