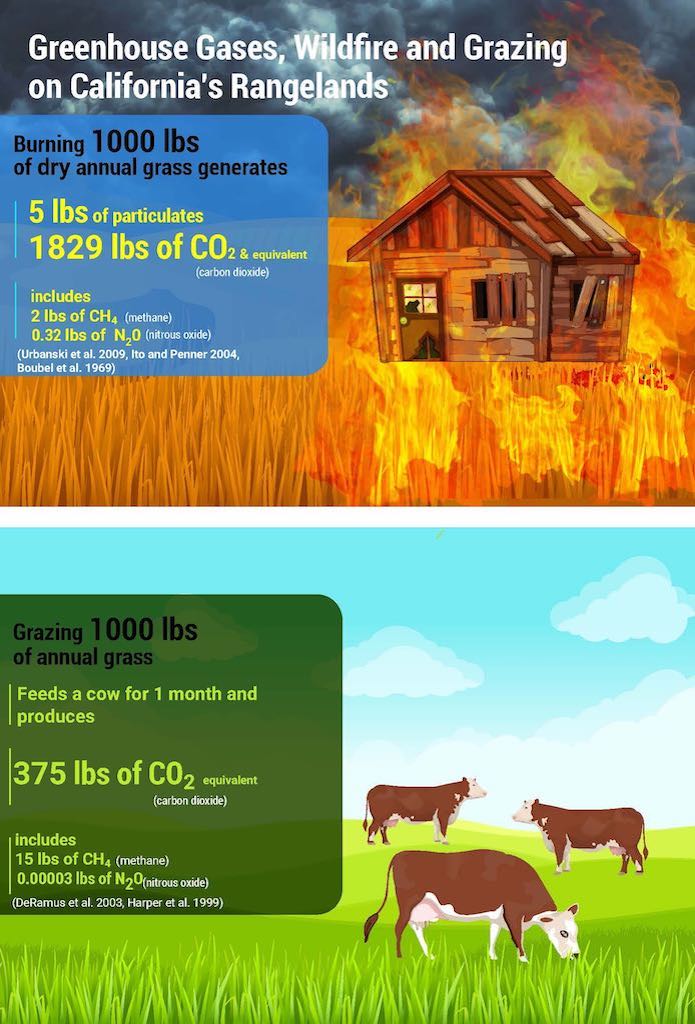 Note: This is the second blog in a 4-part series on solutions to address the impacts of wildfire on agricultural communities. The first blog covered controlled burns.

California’s grasslands co-evolved with both fire and vast herds of grazing animals, some now extinct. As such, fire and grazing are necessary for many of these ecosystems to thrive. While people tend to imagine “forest fires” when they hear about wildfires, a large portion of the state’s wildfires actually occur in grasslands, oak woodlands, and coastal scrublands.

Grasses are considered “fine” fuels. They are easy to ignite and burn fast but at a low intensity. Rob Hazard, a 30-year firefighter and current Fire Marshal for Santa Barbara County, said in a presentation this November that most wildfire ignitions start in grasses, then spread to shrubs (aka “ladder” fuels), which then carry the fire from surface vegetation into taller vegetation and tree canopies. For example, the Thomas Fire in Ventura County in 2017 started in grasses, transitioned into chaparral within hours, and then burned for weeks. That’s why many fuel reduction efforts focus on grasses.

Targeted grazing, also sometimes referred to as prescribed grazing, managed grazing, or prescribed herbivory, is the “application of a specific kind of livestock at a determined season, duration, and intensity to accomplish defined vegetation or landscape goals” (Launchbaugh & Walker, 2006). This is different from conventional grazing in that the primary goal is landscape or vegetation management, not livestock weight gain and reproduction. Targeted grazing is often most cost-effective on landscapes that are too large, steep, rocky, or remote for mechanical or chemical management or in the wildland urban interface (WUI) where prescribed fire is considered too risky. Targeted grazing is also useful as a tool to maintain fuel loads and prevent fuel build up after controlled burns have taken place. Check out this 4-page primer on the topic by UCCE Livestock and Natural Resources Advisor Dan Macon.

Grazing reduces flame length and fire intensity, and can therefore shift grasses from a highly flammable and effective fire spreader into a natural fire barrier. This shift has both ecological and safety benefits. For example, researchers at the UC Hopland Research and Extension Center have observed that sheep grazing in the Center’s oak woodlands prior to the Mendocino Complex Fire in 2018 reduced the fire intensity, which resulted in less tree damage (trunk scorching and canopy loss), higher tree survival rates, and less seed mortality.

Maintaining flame lengths below four feet in grasslands also allows firefighters to manage fires without the use of heavy equipment.  Preliminary fire behavior modeling done in a recent study by a team of UCCE advisors and specialists found that maintaining fine fuels at or below 1200-1300 pounds/acre in the spring and summer will keep flame lengths below four feet with winds up to 40 miles per hour. Of course, the authors point out the goal should not be to graze grasses down to bare soil. Instead, they write:

“Rangeland managers need to balance different management goals… In some areas, it is important to leave more than 1200-1300 pounds of forage per acre to achieve these goals... However, there are opportunities to improve fire safety in California by grazing rangelands that are not currently being grazed or even by increasing grazing intensity on very lightly grazed areas… Strategic implementation of cattle grazing, including potentially fee-for-service agreements, on key private and public lands can meet multiple natural resource objectives, while also lowering fire hazard through reducing fine fuels, reducing fuel continuity, and slowing or stopping shrub encroachment into grasslands.”

Finally, prescribed grazing for fire mitigation can have a variety of economic benefits. As Marie Hoff, a contract grazer and owner of Full Circle Wool, wrote on our blog last fall:

“Grazing for fuel load reduction provides food and fiber, and locally-produced food and fiber at that, nourishing and sustaining the material needs of our communities. With its production of goods and services, grazing supports the state’s economy and provides local jobs, from shepherds to haulers to feed store businesses and butchers, etc.”

Prescribed grazing has gained recognition as a fire mitigation strategy in state policy in recent years. In 2015, the Board of Forestry and Fire Protection’s Range Management Advisory Committee released a white paper outlining the benefits, limitations, best management practices, and CEQA considerations for prescribed grazing projects. Prescribed grazing was subsequently explicitly included in the Vegetation Treatment Program (CalVTP) Environmental Impact Report (EIR), which streamlines CEQA for certain vegetation treatment projects. The Fire Prevention Grants program, which funds community-level fuel reduction projects, has also funded a number of projects that include prescribed grazing in recent years. Still, there are a number of challenges to expanding targeted grazing to the scale needed.

Challenges to Scaling Up Prescribed Grazing

Up Next: Stay tuned for the third blog in our 4-part series on Improving Access to Farms and Ranches During Fire Events.