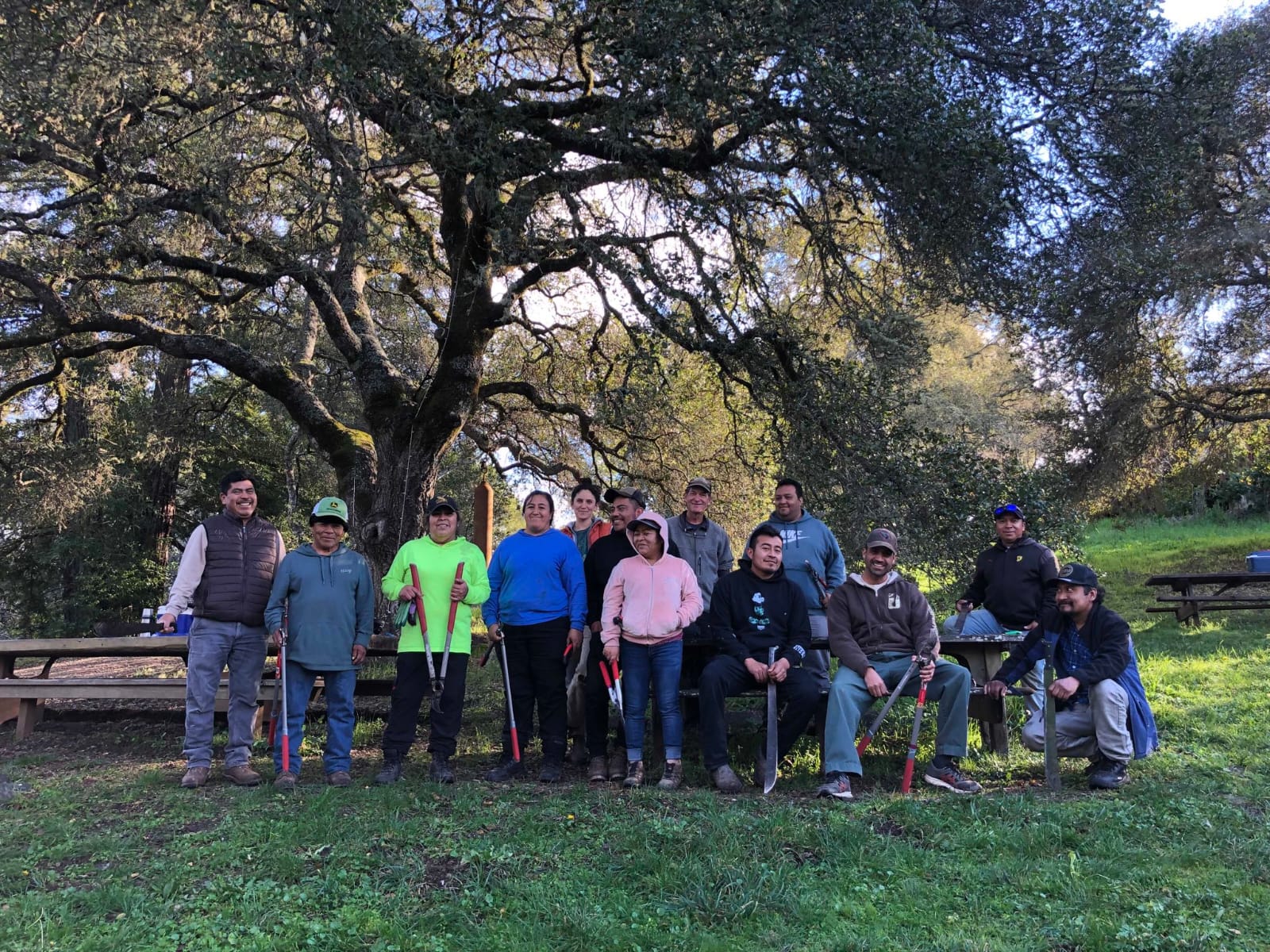 This blog was originally published by CalCAN coalition member Occidental Arts & Ecology Center (OAEC), which is an 80-acre research, demonstration, education, advocacy and community-organizing center in Sonoma County that develops strategies for regional-scale community resilience and the restoration of biological and cultural diversity. You can read the original post here on their website.

The story below describes a vegetation management and workforce development pilot project at OAEC in partnership with North Bay Jobs with Justice (NBJwJ). NBJwJ is a growing, grassroots coalition of over 30 labor and community organizations fighting for economic and racial justice on the frontlines of the climate crisis.

Navigating the threat of wildfire is an ongoing reality of life in Sonoma County. From 2017 to 2020, fires burned more than 300,000 acres across the county, resulting in devastating losses to ecosystems, homes, communities, and human lives.1 Recent years of extreme wildfire events have not only transformed the land itself, but also shifted the priorities of the public, management agencies, and local governing bodies around the essential need for fire adaptation and mitigation.

This work looks different everywhere, but in Sonoma County (SC) where over half the land area is forest and woodlands, there has been a strong focus on “vegetation management” – a set of practices that alter vegetation to reduce wildfire risk, promote public safety, and support healthy ecosystems.2 Often, the goal is to reduce high “fuel load” or flammable vegetation that cause fires to build heat and intensity, through strategies like understory thinning, grazing, clearing along evacuation routes, and prescribed fire. Vegetation management is important in light of extractive land use patterns and decades of fire suppression that have disrupted or altogether eliminated natural disturbance regimes, leading to dense vegetation overgrowth. The removal of fire as a keystone process from California’s landscapes is also inextricably tied to colonization and the criminalization of traditional fire stewardship practiced by Native communities for thousands of years.

To reduce immediate wildfire risk, hazardous fuels reduction is needed at every scale – first, vegetation must be managed around homes to create “defensible space” delineated by a 100-foot perimeter around a structure3, and second beyond 100 feet into adjacent vegetation or wildland. Homeowners are on the hook for defensible space with California law and insurance companies, yet more and more attention is going toward the forest and wild areas beyond in order to create wildfire resiliency at a landscape-scale. Through such targeted vegetation management strategies, humans can take an active stewardship role in healing ecosystems and building fire adaptability for animal and plant life, forest health, and communities.

The good news is that tens of millions of dollars are flowing in from the federal, state, county levels as well as private funds for vegetation management, fire safe education, and capacity-building efforts – and we should expect to see funding opportunities grow in the years ahead. The SC Board of Supervisors allocated $25 million in 2020 alone for vegetation management from PG&E settlement funds in response to the Sonoma Complex Fires lawsuit in 2017. Wildfire risk in SC has even garnered attention from the federal government, President Joe Biden awarding SC a $37 million grant from FEMA designed to support fire mitigation efforts.4 Although we’re encouraged to see vegetation management work being prioritized, it’s critical that these funding mechanisms (and grant-making entities) center the needs and voices of frontline workers. A sustainable, long-term vision of resilience cannot be separated from justice for the workers who are leading fire mitigation efforts on the ground.

As the scope and scale of vegetation management increases in the years ahead due to climate crisis and drought, the demand for a skilled ecological restoration workforce will only continue to grow.5 In SC, “landworkers” or “trabajadores de la tierra” from Mexico and Central America are the backbone of the wine and agricultural industries and make up a large percentage of the day-labor workforce from gardening and landscaping to home hardening and hazardous fuels removal. As landworkers continue to step into an emerging fire mitigation workforce, it’s essential that they be compensated and centralized as leaders whose hard work, heart, and expertise make adaptation possible. As vegetation management funds continue to flow into the county, how can we ensure that these funds create just jobs and living-wage career pathways for frontline workers and marginalized communities most directly impacted by the climate crisis?

This winter, OAEC and North Bay Jobs with Justice (NBJwJ) joined forces with ten workers from their Farmworker Justice Campaign on a vegetation management and workforce development pilot project. NBJwJ is a growing, grassroots coalition of over 30 labor and community organizations fighting for economic and racial justice on the frontlines of the climate crisis. NBJwJ took lead on organizing a crew of workers and over the course of a month, the crew completed 41 acres of on-site fuel reduction and mitigation work, funded by After the Fire and Gold Ridge RCD’s North Bay Forest Improvement Program(NBFIP). Throughout the project, OAEC staff also offered training in the field and days of hands-on education in Spanish, while workers shared their experiences working on the land – both here in SC and in their home communities of Mexico and Central America.

Much of this pilot was guided by our belief that how we do the work is just as important as the work itself. All too often, as a cost cutting measure, vegetation is managed in ecologically and socially harmful ways, resulting in excessive mastication of vegetation or clear-cutting, not to mention worker exploitation. When used without careful discretion, activities intended to abate fuel load in our forests can result in further environmental degradation while exacerbating social and economic risks for our most vulnerable communities. Funding opportunities in wildfire preparedness and prevention can and should invest in the true cost of ecologically-literate vegetation management and well-paid jobs, to do right by the environment and the workers.

OAEC and NBJwJ seek to model the implementation of vegetation management in a way that not only effectively mitigates fire risk, but also is regenerative and connective for the workers and the whole of the ecosystem (soil, water, carbon, habitat, biodiverse life!). Throughout the month-long project, the sounds of the worker crew echoed under the redwood and fir canopy as they masterfully wielded machetes to clear dead tan oak, overgrown vegetation, and encroaching seedlings. Many of the workers, like Anayeli Guzman, were very familiar with the work of tending to the land, albeit more frequently in the vineyards. Anayeli shared in Spanish her perspective on the difference between this project and the seasonal grape harvest: “It’s a different way of relating to the land, more connected to needs of other animals who also depend on it.” She recounted that, earlier in the month, the crew had taken great care to avoid disturbing an area on the northeast corner of the property where a pair of Northern Spotted Owls, an endangered species, have been known to nest during the breeding season. “Especially for those like myself who work the land for a living, it feels good to be more connected, to actually be caring for the needs of the land.”

The crew honed their skills in a myriad of other stewardship practices, including site assessment, plant and tree identification, and wildlife habitat restoration. Another important goal we sought to elevate during this project was increasing the land’s drought tolerance and water holding capacity as well as mitigating the erosion of waterways that flow downstream into the salmon-spawning waters of Dutch Bill Creek. In practice, this looked like selective thinning to “release” larger, healthy trees from surrounding competition, laying logs and brush along the contour of a slope, and strategically packing incising gullies with leftover biomass to slow the flow of water and reduce erosion. Anabel Garcia, another worker leader, spoke to the connections between forest and watershed health: “We’re choosing the trees that will bring in the most humidity and fog, and making sure that the salmon down the hill have cleaner water.” The attentive care involved in this project was a stark contrast to what some of the workers witnessed around nearby vineyards where machines simply clear-cut massive tracts of the forest.

During the pilot project, we also found that creating space in this work to honor the multi-dimensionality of a landscape rather than focusing solely on one element or ecological process invited more meaningful engagement with the land and activated stories of place. For many of the workers, these concepts were not new, but in fact echoed familiar practices of growing food, healing soil, and tending land in community. Some workers also shared reflections grounded in their ancestral and Indigenous roots – a testament to the crew’s depth of knowledge and ethic of Earth stewardship that is core to building a more resilient future.

In another memorable moment, the crew came across a patch of grassy mounds, a physical legacy of the Italian-settler vineyards that once lined that hillside at the turn of the 20th century. Native grasses growing on the mounds were an even older testament to the once expansive ancestral Pomo coastal prairies, and thanks to the mounds which prevented the bunch grasses from being cut, are preserved to this day. Histories and re-emergent possibilities intertwined. Looking around at the thinned understory and woodrat habitat piles built earlier that day, Anabel reflected on the stories of what was to come: “The community has to think about preserving the soil and the trees. In the future, this is the work that is protecting us.”

Adapting to the pressing reality of fire cannot be achieved without ensuring justice for landworkers. The immigrant and Indigenous worker leaders of NBJwJ are on the forefront of that movement. Building on the work with OAEC, NBJwJ is partnering this year with Santa Rosa Junior College (SRJC) and the Tribal EcoRestoration Alliance (TERA) on a vegetation management and wildfire mitigation workforce development program, which integrates workers’ rights, Traditional Ecological Knowledge, and public policy development. As the impacts of climate change worsen and the need for vegetation management as well as a trained workforce to do that work grows. NBJwJ and OAEC are supporting immigrant and Indigenous workers to develop a social enterprise that is truly worker-owned and operated. Trabajadores de la tierra, who are on the frontlines of climate change-fueled wildfires, can lead Sonoma County in listening to the land and organizing for worker justice to create a sustainable, thriving future.