The California legislature took an important step last week to improve transparency in groundwater well-drilling and to provide family farmers the information they need to make informed decisions about their own groundwater use and infrastructure in the face of recurring droughts, groundwater overdraft, and climate change.

Both houses passed Senate Bill 252, which requires local governments in critically overdrafted groundwater basins to request additional information on new well permits, including the depth, capacity, and estimated extraction volume of new wells, and to make that information publicly available. The bill now heads to the Governor’s desk.

SB 252 responds to concerns we have heard from many family farmers and rural residents, whose groundwater reliability and quality have already been impacted by deep new well drilling across the state, especially in the San Joaquin Valley. CalCAN and our coalition partner, Community Alliance with Family Farmers, have been advocating for the bill since Senator Bill Dodd of Napa introduced it in February of this year.

New well-drilling hit an all-time high in 2015. In the San Joaquin Valley, the number of wells drilled was five times the annual average for the previous 30 years and more than twice the rate of California’s previous six-year drought, according to analysis by the Sacramento Bee.

Critical information about these new wells has previously been very difficult to find, leaving family farmers and rural residents in the dark about potential impacts on their groundwater.

This ‘Race to the Bottom’ in critically overdrafted basins has reduced aquifer levels and dried up 2,082 wells as of March, 2017. New wells often cost hundreds of thousands of dollars – a cost many family farmers and rural residents cannot afford. Groundwater overdraft has also led to subsidence in some areas, which has damaged critical and expensive state infrastructure, such as levees, highways, and canals.

While SB 252 will not by itself reduce the pace of groundwater well-drilling in the state, it will for the first time allow concerned farmers and rural residents to find out how many new wells are being drilled in their area, how deep they are going to be drilled, what their capacity is expected to be, and how much water they are estimated to extract on an annual basis. This data can give fellow groundwater users a sense of what they are up against in terms of competing groundwater extraction and how long their groundwater supply might last, giving them some time to respond. 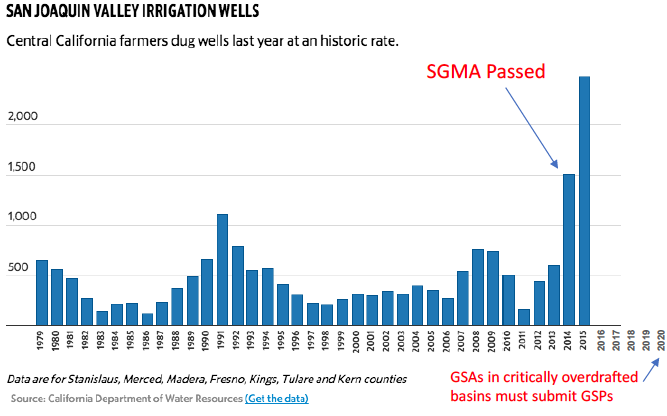 The requirements of SB 252 will remain in effect until Groundwater Sustability Agencies complete their GSPs in 2020, at which point they can decide whether to continue making new well permit information public. At least in the meantime, concerned farmers and rural residents will have the option of becoming informed about what is happening to the shared groundwater resource on which their livelihoods depend.

California is moving toward more sustainable management of our groundwater resources. SB 252 is a modest, but important step toward accomplishing those goals.