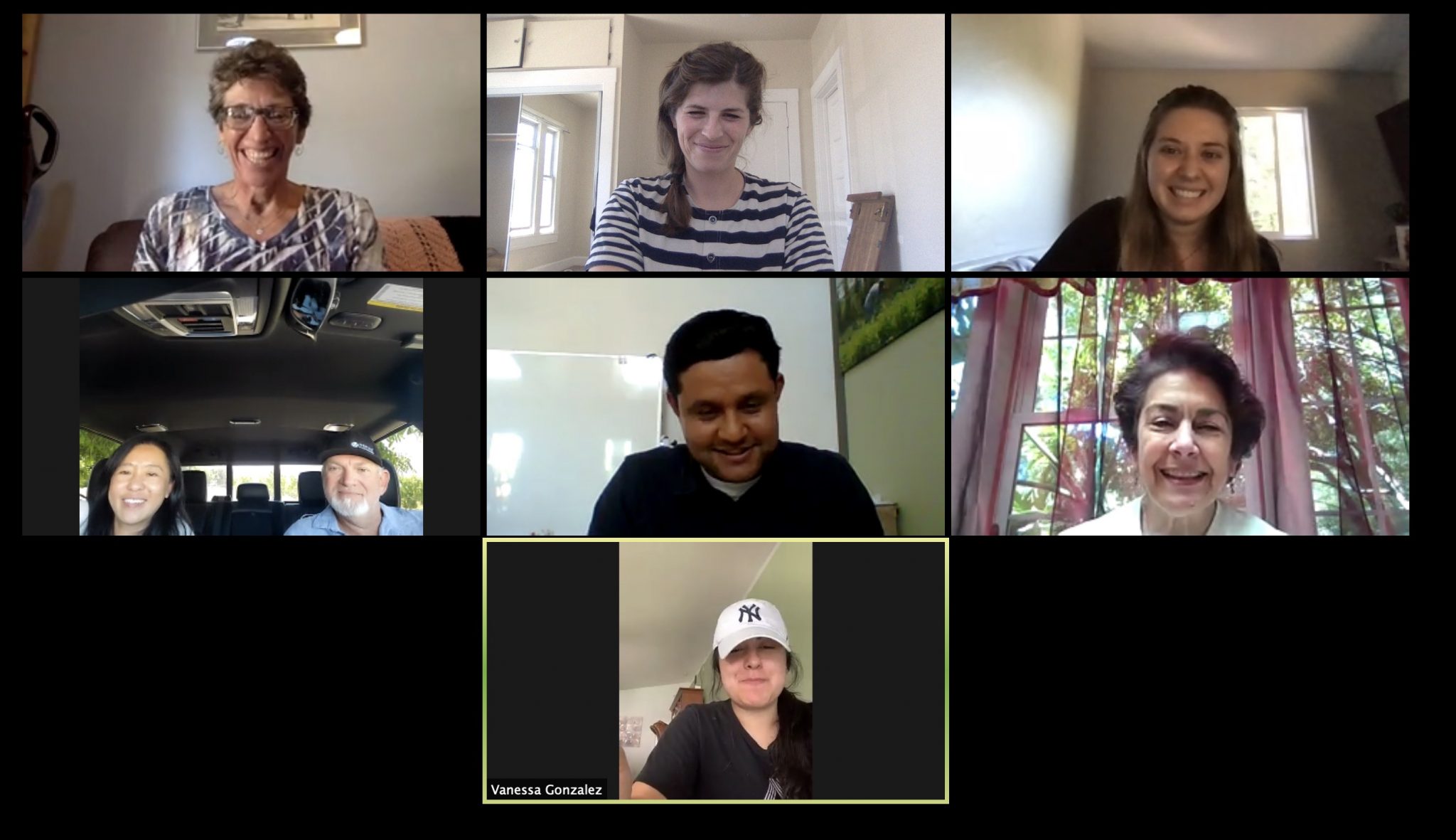 A screenshot of a virtual “in-district” meeting with Senator Caballero

What does advocacy look like when in person gatherings are not possible?

Having joined CalCAN late in 2019, a big part of my experience with the organization has been shaped by the pandemic and its impact on farmers and ranchers as well as on the legislative process. Because CalCAN had to cancel a series of meetings in person with legislators in addition to our Legislator Education Day planned for March, we have been trying creative ways to connect constituents across the state with their representative.

This summer, we organized several virtual “in-district” meetings with legislative offices throughout California, bringing constituents into the screen with their elected representatives to share stories about why climate friendly practices and the state’s Climate Smart Agriculture programs are key to farm viability and curbing climate change. Even from our little video bubbles, it was exciting and hopeful to connect with farmers and advocates across the state and share our stories and commitment in a truly sustainable agricultural system.

Senator Atkins is the Senate President Pro Tem, and we had the chance to meet with the environmental and agricultural staff in her office. We were joined by six constituents: a San Diego farmer, representatives from the San Diego Farm Bureau, scientists from the Resource Conservation District (RCD) of Greater San Diego and the San Diego Food Systems Alliance. RCD staff shared how their Healthy Soils Program demonstration grant has helped build soil organic matter, impacting crop production and moisture retention and Dr. Chandra Richards gave an overview of how soil actually holds carbon, grounding all of us in the how and why of program impacts. Farmer Ellee Igoe from Solidarity Farm in San Diego shared how the farm has been dealing with the impacts of early heat on their crops this year and the subsequent changes to initial harvesting plans. Fortunately, having spent time developing healthy soils, they were able to adapt to the changing environment and launch a food distribution program to provide for those in need. Senator Atkins’ staff were interested in policy approaches to shore up local markets for San Diego farmers, and appreciated getting a copy of a letter submitted by CalCAN and a number of other partners offering economic stimulus policy ideas in agriculture.

Our meeting with Assemblymember Eggman’s staff was kicked off by Christy Locke, a farmer in Lockeford who described their many years of using of cover crops and compost to improve soil health in their walnut orchards. Christy, with her background in soil science, described the improvements they’ve seen in earthworms, natural pollinators (because they don’t need to spray pesticides), and much better water penetration.

Also with us was Caddie Bergren, a technical assistance provider from the University of California Cooperative Extension (UCCE), spoke about the high demand for healthy soils funding among the farmers she supports in applying for and implementing state grants. Charlotte Mitchell,  the Executive Director of California Farmland Trust and longtime farmer, discussed her experience with several grants to permanently protect farmland through the SALC Program, as well as how her family farm’s SWEEP grant has cut water and energy use. Assemblymember Eggman’s staff person reiterated their support for the Climate Smart Agriculture programs, recognizing their value not only to farmers but to Central Valley residents because they contribute to air and water quality improvements.

Senator Caballero and her staff member joined us for a meeting with two farmers who were Zooming in from their car during a break from harvesting. Linda Chu and her husband Jeremy Lackey farm 700 acres of Asian greens in Hollister and have received both SWEEP and Healthy Soils Grants. As Linda put it, “the Healthy Soils Program is the best thing that happened in Hollister.” The grant paid for compost that Linda described as a gamechanger for the clay soils common in the Hollister area. Since using compost, they have seen improved water retention and savings in water use and chemical applications.

Also at the meeting was Manny Cervantes, production manager at the Agriculture & Land-Based Training Association (ALBA) in the Monterey County area, also a recipient of SWEEP and Healthy Soils grants. Manny shared how their Healthy Soils demonstration grant allowed the many farmers who come through the farm training at ALBA learned first-hand about the benefits of compost application for soil water availability. Finally, Valerie Perez described her first year at the UC Cooperative Extension as a climate education specialist hired to aide farmers with Climate Smart Agriculture grants. She stressed how much interest there is in the Healthy Soils Program among the many farmers she has met, and how important the funding is to keep that momentum going.

Senator Caballero reiterated her support of the Climate Smart Agriculture programs, lamenting the funding challenges facing the state that are impacting them, and indicated her interest in visiting ALBA and Benito Valley Farms to see firsthand their projects.

One of my favorite images from the series of Zoom meetings we organized this summer was Krissy Scommegna from Boonville Barn Collective in Mendocino County (pictured left) who set up a makeshift desk in pepper field to talk with Senator McGuire about their Healthy Soils grant!

Even in these challenging and busy times, legislators and partners took the time to meet about climate friendly agriculture practices, clearly indicating the importance and value of these strategies in achieving our climate goals and the state’s economic recovery. Indeed, in conversations with partners within California and those in the National Healthy Soils Policy Network across the country, we have heard that one of the silver linings of the new work-from-home realities is the more consistent and quality connections between representatives and their constituents.

These virtual legislator meetings reminded me of the importance of bringing the voices of farmers, ranchers and other agriculture professionals directly to their representatives to speak from their lived experience about how vital a role agriculture can play in curbing climate change. We believe that it is these kinds of acts of coming together that influence policy and make change, even in a year where we are more physically distant from one another than ever before.