USDA’s 2017 farm census was released last month, revealing familiar trends of farm consolidation and loss of agricultural land. California remains a leader in agricultural production, generating 45 billion dollars worth of food, fiber, and fuel on 70,000 farms covering 24.5 million acres in the state. We took a close look at the 2017 census to get a better sense of what has changed in our agricultural landscape since 2012, choosing to highlight areas that have seen particularly substantial changes in the last five years. 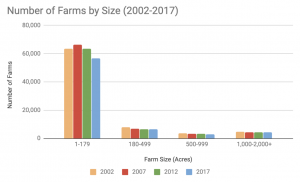 California generates 11% of the country’s on-farm renewable energy and is increasing its capacity with 8,700 more farms investing in renewable energy systems since 2012. Marginal farmland, salt affected-land, or land with otherwise contaminated soils provide opportunities for farmers to generate the power they need to operate irrigation pumps, electric fencing, and machinery without converting prime cropland. Since 2012, more than 8,000 farms installed solar systems, totaling nearly 14,000 statewide. Wind-powered farms also continue to grow, with more than 400 operations using wind throughout the state. We also saw an increase in methane digesters, up from 41 in 2012 to 57 in 2017.

Farms implementing soil building practices that increase fertility and water holding capacity, like reduced or no-till and cover cropping, are increasing statewide. In 2017, nearly 240,000 acres of cropland were under no-till management, with an average of 61 acres under no-till management per farm that reported using the practice. No-till practices are favored by very small farms, with over 2,400 very small farms implementing the practice. Few very large farms (2,000 acres or more) are using the practice, with only 13 operations implementing no-till in 2017. However, the impact of these 13 farms is considerable, reporting a collective 53,000 acres compared to the nearly 7,000 acres combined of very small farms. Intensive tillage is on the decline, with 700,000 fewer acres intensively tilled in 2017. USDA certified organic farms increased in number since 2012, totaling 3,409 in the state. 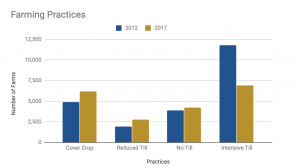 The Ag census continues to be a valuable source of information, indicating trends that shape our agricultural landscapes and the people who manage them. Moving forward, it will be important to monitor the cumulative impacts of management choices and continue to explore the connections between demographics and land use as we advocate for state funds to be allocated in support of climate-smart and resilient agriculture.

With California pushing for one million acres under healthy soils management by 2030, it’s clear that a lot more investment in outreach, education, technical assistance, financial incentives, and demonstration projects will be critical in the coming years.