In November 2017, the California Air Resources Board (CARB) released an update to their Climate Scoping Plan, which serves as a roadmap to achieve the state’s goal of a 40% reduction in greenhouse gas emissions by 2030. The scoping plan includes a directive to create a Natural and Working Lands Climate Change Implementation Plan, which will outline an interagency effort to address climate change through programs on natural and working lands. The final Implementation Plan will set goals for agencies who receive state funding. With appropriate changes to the draft it will also outline the ways in which increased investment in these programs can make a radical impact on the state’s climate change mitigation efforts. 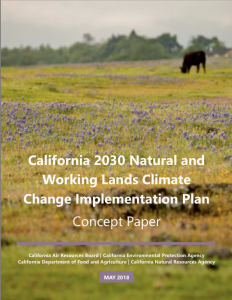 A recently released draft Implementation Plan includes a proposed emission reduction goal of 15-20 million metric tons of CO2 equivalent by 2030 from projects on natural and working lands, a description of methods for calculating and tracking emissions and carbon sequestration, and an outline of state programs that will be used to meet this emission reduction goal. State agencies involved in the plan include the California Natural Resources Agency, Air Resources Board, Environmental Protection Agency, Department of Food and Agriculture, and the Strategic Growth Council. The Implementation Plan will work to outline potential climate benefit of two agriculture-focused state programs: CDFA’s Healthy Soils Program and the Department of Conservation’s Sustainable Agricultural Lands Conservation Program. CalCAN has followed this process closely and supports the state’s effort to embrace natural and working lands as a critical piece of the state’s strategy to achieve its ambitious climate change goals.

State agencies involved in the process held a public workshop in Sacramento in May, and on July 2nd completed the last of their statewide regional meetings in which they requested comments on the draft. CalCAN attended regional meetings for the North Coast and the San Joaquin Valley. During the meetings, attendees were asked to provide feedback on regional “business as usual” and “ambitious” acreage targets for state programs that fund climate smart practices on natural and working lands.

Attendees voiced common concerns that acreage targets in the “ambitious” scenario were too low. Additionally, many were concerned that creating scenarios for state intervention without assessing the impact of existing federal programs such as NRCS’s EQIP made the plan unclear. While it was stressed that the plan was designed to look specifically at state programs, many were frustrated by “baseline” acreages that were only a small fraction of the potential acreage in their region due to the currently limited scale of state programs. The lack of clarity for agricultural targets was most striking, as CDFA did not include acreage scenarios for the Healthy Soils Program because the program has only gone through one year of funding. Overall, attendees asserted that a final draft should serve as an aspirational vision for what the state can achieve. In order to put forward this more ambitious vision, attendees said the natural and working lands GHG reduction target should be much higher than 15-20 MMT CO2 equivalent.

While this draft Implementation Plan is a step in the right direction, there are a number of improvements that must be made to increase the accuracy and usefulness of the plan. Recently, a team of University of California researchers with expertise in soil science and agricultural practices came together to address their concerns with the draft in a letter to CARB. The letter included the following recommendations:

Recommendation 1: Consult with the NRCS, Cooperative Extension, and other agriculture stakeholders to develop a more accurate baseline model.

Recommendation 2: Include nitrous oxide emissions in the plan.

Nitrous oxide is a potent greenhouse gas and a critical portion of the climate impact of agriculture. Failing to include this important contributor to agriculture’s greenhouse gas emissions critically reduces the scope and accuracy of the plan.

Researchers cited multiple papers that suggest the state’s target of 15-20 MMT of CO2 equivalent is not ambitious enough. One paper, by Dr. Richard Cameron and others at The Nature Conservancy, found that work on natural and working lands could achieve a 147 MMTCO2e reduction by 2030.

Involved state agencies are currently revising their draft Implementation Plan. They will release an updated GHG reduction goal in September and a final draft in November. CalCAN will continue to provide feedback throughout this process to help ensure that this document accurately captures the state’s potential to address climate change on natural and working lands.