With renewable energy, California farmers and ranchers can offset their energy needs, save money and contribute climate solutions.

In 2009, just over 1,900 farms in California produced solar energy, according to the U.S. Department of Agriculture’s (USDA) first survey of on-farm energy production. By 2012, the number of California farms and ranches producing renewable energy had almost tripled to nearly 5,500 farms.

In 2011, Governor Brown signed into law a CalCAN-sponsored bill (SB 489, Wolk) which expanded the state’s Net Energy Metering (NEM) program to include all available types of renewable energy generation, including bioenergy. NEM allows utility customers to connect renewable energy projects to the grid and get credit on their energy bills for the energy they produce.

In 2012, another CalCAN-supported bill (SB 594, Wolk) was signed into law, creating a new program called Net Energy Metering Aggregation (NEMA). NEMA allows renewable energy produced on one meter to be credited against electricity use on other meters of the same customer. Prior to SB 594, farmers who wanted solar to offset most or all of their energy consumption had to connect a separate solar array to each meter, making it inefficient and cost prohibitive for many growers to maximize the opportunities to produce clean energy.

In late 2016, CalCAN published a NEMA Progress Report. The report summarized findings and recommendations from interviews with growers who have installed solar and solar industry representatives involved with agricultural projects. The report found that:

In the fall of 2018, CalCAN put together a comprehensive set of recommendations for the next Governor of California about how to scale up sustainable agricultural climate solutions, including through on-farm renewable energy. Read the report.

“Energy is not going to get cheaper, so we are making long-term investments to get us through hard economic times.”

“Shining Brighter: Farmer Perspectives on California’s Renewable Energy Program” is based on farmer interviews and includes a review of what has been working since the launch of NEMA in 2014 and makes recommendations to improve it.
View/Download Report 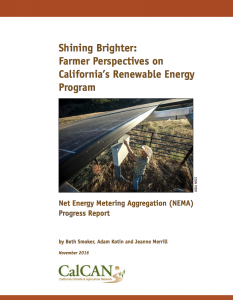