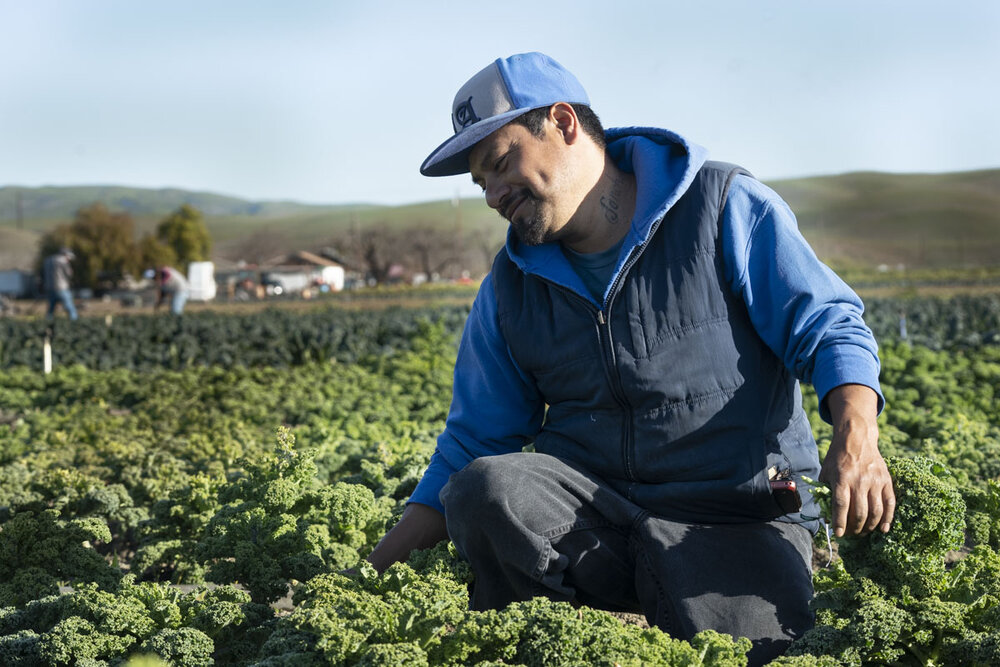 San Juan Bautista is a small farming community, located about twenty miles east of the Pacific Ocean, but worlds away from the tourist economy on the coast. It’s not an easy place to make a living, but land is more affordable in San Benito County than in Santa Cruz or Monterey, so farmers make things work through cooperation and sharing knowledge.

This year, five Restore California grants went to farms near San Juan Bautista, and Zero Foodprint recently had a chance to speak with four of the farmers. Our conversation was facilitated by Tania Zuñiga, from the nonprofit Kitchen Table Advisers (KTA), which supports BIPOC producers in Northern California with business plans and other advice. All of Zero Foodprint’s grantees in San Benito previously worked as field workers and now that they have their own land, they work closely with the Monterey Resource Conservation District on soil and water management and participated in an incubator program for under-resourced organic farmers. Zero Foodprint is proud to help these farmers build value for their sustainable farms through soil health.

Maria Reyes, from Narci Organic Farms, was the first member of the group to speak up–she’s been farming strawberries for about 30 years, but about six years ago, she struck out on her own and decided to learn more about improving her soil. Maria has already put compost on two of her acres and she has seen how it helped her plants grow–but she couldn’t afford compost for the rest of her farm until now. Maria will use her Restore grant to apply compost first, and then she’ll plant cover crops that can survive the heat of July and August in San Benito County.

Rufino Ventura agreed: compost is really helpful, and his Restore grant would allow him to cover all seven acres at Ventura Organics, his mixed-vegetable operation. Rufino remarked that climate change has made it harder to farm in the area, because it’s both hotter and drier than it used to be; there was snow and rain when he arrived in 1996, but he hasn’t seen snow in the mountains since 2000. Rufino Ventura shared his concern about the blue valve water getting more expensive and being less available, as a result of climate change.

Jesus Calzadillas from Los Pinos said he’d been working with strawberries for 20 years but took on his own 4-acre farm near San Juan Bautista to “move forward and improve our lives.” Likewise, Everardo Solorio from Solorio’s Organic has already composted on two acres of the farm he started in 2019, and he is looking forward to applying compost to the other four acres this month.

All of the farmers had felt the effects of climate change, between the heat, the drought, and the fires. “I had a half acre of celery that we couldn’t harvest,” Maria said, “because the fires made it like night and ash was flying.” Roberto added that the fires had impacted both production and sales, because people couldn’t come out to the farmers’ markets with the ash, so he had to throw away a lot of produce.

While farmers can improve their own soil with compost and other regenerative practices, they still need to reach customers, and the San Juan Bautista group was excited by the prospect of connecting with Zero Foodprint restaurants and supporters in the Bay Area. They’ve teamed up on distribution, and they’re looking forward to expanding their community to include people who love good food up and down the California coast.