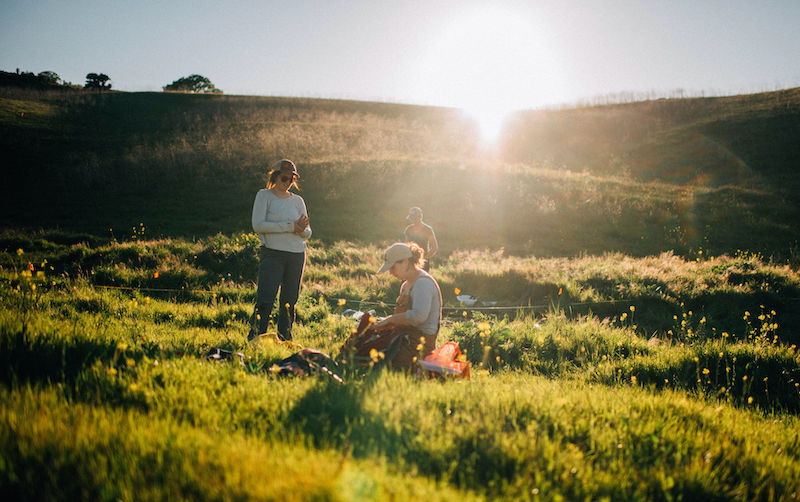 Timothy Bowles Ph.D. is an Assistant Professor in the Department of Environmental Science, Policy and Management at UC Berkeley and CalCAN Advisor, with research focused on the intersection of agroecology, soil ecology, and biogeochemistry. Paige Stanley is a Ph.D. candidate at UC Berkeley focusing on grazing methods that sequester soil carbon and regenerate rangeland ecosystems while improving rancher livelihoods.

Can we sequester enough carbon in agricultural soils to help mitigate climate change? Limiting the severity of climate change requires simultaneously reducing greenhouse gas emissions while also actively working to remove them from the atmosphere, so-called “negative emissions” strategies. Decades of research shows that changing agricultural practices can allow soils to do just this – remove atmospheric carbon dioxide and stabilize it as soil carbon belowground. California depends on soil carbon sequestration to meet its climate change goals, allocating millions of the state’s cap-and-trade dollars toward helping farmers and ranchers adopt a suite of practices that sequester soil carbon, what we refer to here as “regenerative agriculture” (but are technically called “Climate Smart Agriculture” programs in California). While many farmers and ranchers, policy makers and scientists see this as a win-win (increasing soil carbon also improves the health of soil in ways that help farmers adapt to more severe weather), a recent high-profile report and blog post from the World Resources Institute charges that regenerative agriculture has little actual climate change mitigation potential. As agroecologists and soil biogeochemists working in California agriculture, we want to respond to the main points in a California context.

The WRI report, led by lawyers and development economists, challenges both the biophysical potential (does it really work?) and the scalability (how many farmers and ranchers would actually adopt the practices?) of regenerative agriculture. Yet as leading soil scientists have already noted, hundreds of long-term field experiments across the world – including several in California[i] – document how practices like cover cropping, tillage reduction, and diverse crop rotations increase soil carbon stocks. What the WRI report calls “uncertain benefits” are actually well-known sources of variability. Differences in soil properties, the depth of soil considered, how management is implemented, and climate do influence net changes in carbon stocks in response to management. Natural climate solutions like increasing soil carbon stocks demand a perspective that can embrace this complexity and accommodate the uncertainty vs. engineered solutions that may be easier to predict. What we gain by doing so are the tremendous co-benefits that come with building soil carbon stocks.

While the WRI report narrowly focuses on a few practices in isolation, namely no-till and increased livestock productivity, practitioners and researchers alike note that regenerative systems are based on principles that manifest as multiple practices, often “stacked” on top of each other. In California, for instance, research in the San Joaquin Valley showed that combining conservation tillage with cover cropping led to greater soil carbon stocks than either practice alone, with actually no change detected at all with conservation tillage alone. Regenerative practices go beyond the crop field too, including perennial vegetation along farm margins like hedgerows and riparian corridors, where research in the Sacramento Valley shows substantial amounts of carbon above and belowground.

“Faulty carbon accounting” is another issue the report raises, which occurs when soil carbon stocks increase as a result of a transfer of carbon to the soil from another ecosystem (such as manure or compost), but without net greenhouse gas removal from the atmosphere. Researchers are well aware of this issue and the need for life cycle analysis to show whether or not net GHG reductions have occurred. Indeed, we cover this topic in introductory undergraduate courses on agroecology and soil! Fortunately, research has already been done for California rangelands, showing net negative emissions with compost applications to a rangeland soil, with further evaluations in progress. More comprehensive life cycle analyses are needed for croplands in California to more fully understand the climate benefits of compost and manure, which research at UC Davis’s Russell Ranch and USDA-ARS in Salinas shows has the biggest impacts on increases in soil carbon.

Another faulty argument WRI levies against the potential of regenerative agriculture to mitigate climate change is an assumption that the transition from intensive to regenerative agricultural practices decreases yields, leading to conversion of ecosystems elsewhere in order to maintain food production – which could increase rather than decrease emissions overall. While at its surface this seems like a compelling argument, there are several fundamental flaws that harken the so-called “land sparing/land sharing” debate in biodiversity conservation. First, studies show[ii] that regenerative practices that build soil carbon often maintain or actually increase yields while also increasing ecosystem services like nitrogen retention. Second, reductions in crop yields in one area do not necessarily lead to cropland expansion elsewhere. On the contrary, evidence suggests that high-yielding systems actually encourage further cropland expansion because of the profit opportunity and economies of scale they present – an economic phenomenon called Jevon’s paradox.

The WRI report and others note the scalability issue, i.e. that adoption must occur over large areas and many farms in order for regenerative agriculture to have a meaningful impact. While this is certainly a major issue – perhaps the issue –  is it also a societal choice. Our own research in California, in collaboration with social scientists at UC Berkeley and UC Santa Barbara, has identified agronomic, knowledge, economic, and structural barriers to adoption of more regenerative agricultural systems[iii]. Well-designed public policies that provide incentives, reduce regulatory barriers/provide regulatory relief, coupled with robust peer-to-peer learning networks, technical assistance, land tenure and access, and industry buy-in could all be oriented to catalyze a major transition toward regenerative agriculture. The many other solutions WRI considers to reduce agricultural GHG emissions are also all socio-political choices that will be challenging to scale.

For any agricultural solution to mitigate climate change, we must consider not only its effectiveness and scalability, but also how it affects other long-lasting challenges like water pollution, soil degradation, and farmer and farm worker livelihoods. Since management systems that build soil carbon stocks can also address these challenges, we see these systems as an essential part of a transition to regenerative agriculture.