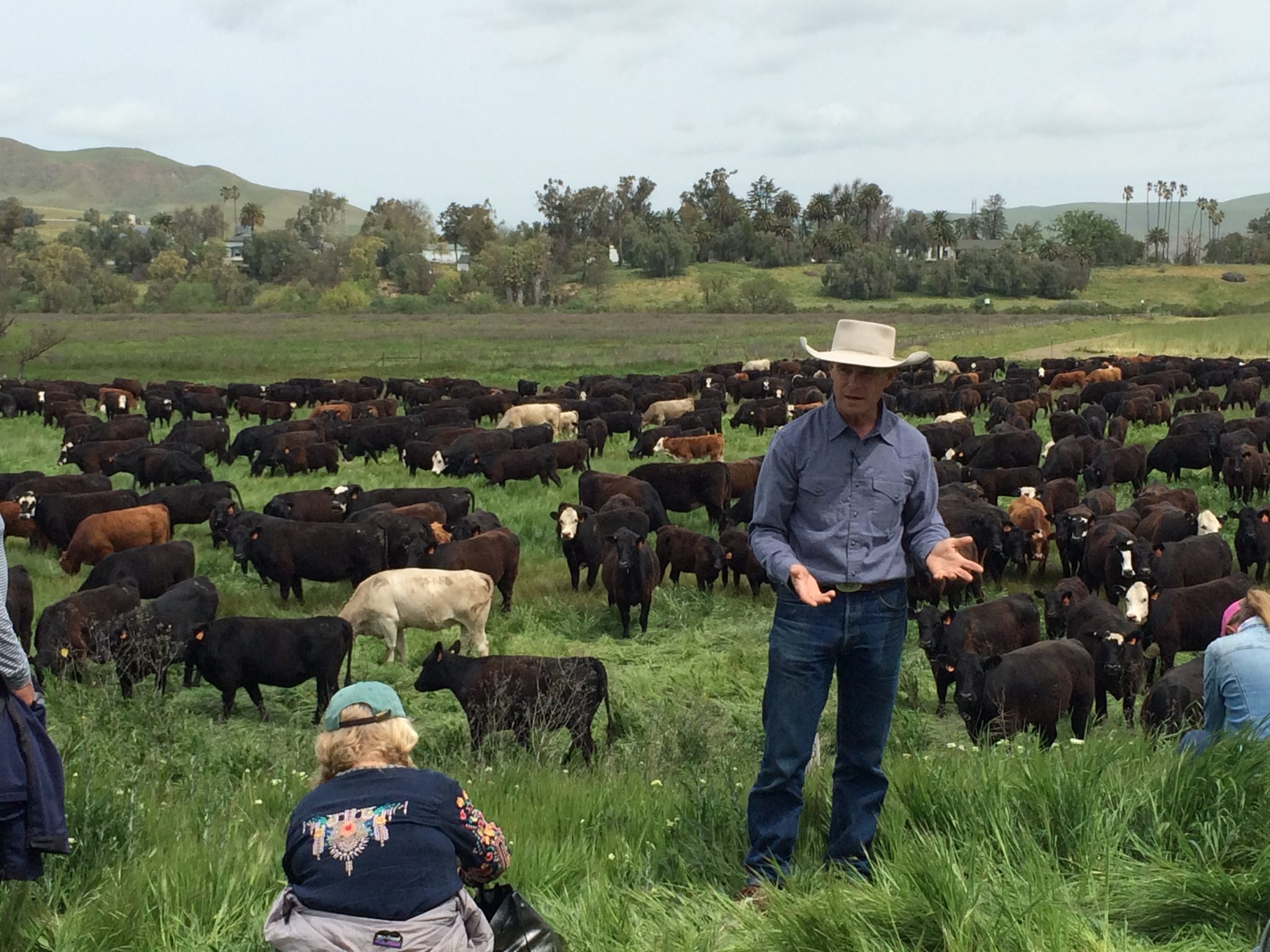 The Soil Carbon Coalition hosted another one of its Rancher to Rancher days, bringing together ranchers and conservationists from across the state at Paicines Ranch in San Benito County to discuss water cycle function and drought resilience. The group gathered in the morning and sat in a circle, or listening session, on pasture grazed by Joe Morris’s herd of cattle.

Morris, a CalCAN Farmer Advisor, has been selling grass-fed beef directly to consumers in the Bay Area for the past two decades and helps lead the Rancher to Rancher initiative, which receives funding from the 11th Hour Project. “We don’t have a cultural space for this kind of dialogue, for the mundane, for the minutiae,” explained Morris to the group, opening the space for sharing of what, as producers and land managers, can be lost in the daily pressure of managing a ranch. The objective, Morris stated, was to create a “shared intelligence” around the “mirco-architecture” of the soil beneath our feet.

With the framing for the listening session set, Morris described the impetus for bringing everyone together or the aha! moment when he tested soil temperatures on a ranch he managed. He tested both covered ground and uncovered ground to find a staggering difference in temperatures: the covered ground was 83 degrees and the uncovered ground was 120 degrees. He quickly got to imagining what that meant multiplied over the 40 million acres of rangeland in California and how it connected to herd management and grazing impact.

Ground cover can be created when ruminants trample a portion of the forage available and leave it on the ground to decompose with the help of their manure and urine. This impact is often achieved by moving a high-density herd through small pastures quickly, leaving ample time for the decomposition process and for the plants to recover. Among the objectives of the extended rest period is to mimic the migratory patterns of wild ungulates and encourage native perennial grasses to return from the existing seed bank. These perennial grasses remain green into the dry season and have longer roots that return liquid carbon deeper into the soil.

Among the Rancher to Rancher team is soil scientist Peter Donovan and Richard King of Holistic Management International. Donovan and King led a water infiltration demonstration, comparing a piece of bare ground to a piece with forage and intact roots by pouring water over the samples to mimic rainfall and create a miniature visual of how much water will infiltrate or run off under these conditions. The sample with forage and roots captured significantly more water, exemplifying how ground cover can make a considerable difference for soil moisture levels. Considering that an actual raindrop will hit the ground at 125 mph, it became clear that the potential compaction of bare ground is much greater as aggregate stability is degraded.

An overwhelming sentiment became clear as the day progressed: ranchers can influence scientists and policymakers with their management choices.

The session was especially impactful because it did not shy away from examining the agronomic opportunities tied to these management choices. Healthier soil means more water, which means more forage for cows and sheep to graze. It also means resilience in the face of uncertain rain patterns and extended periods of drought. But most of all the day brought people together to share hope in the face of some of the most troubling aspects of ranching today: viability in a changing climate.