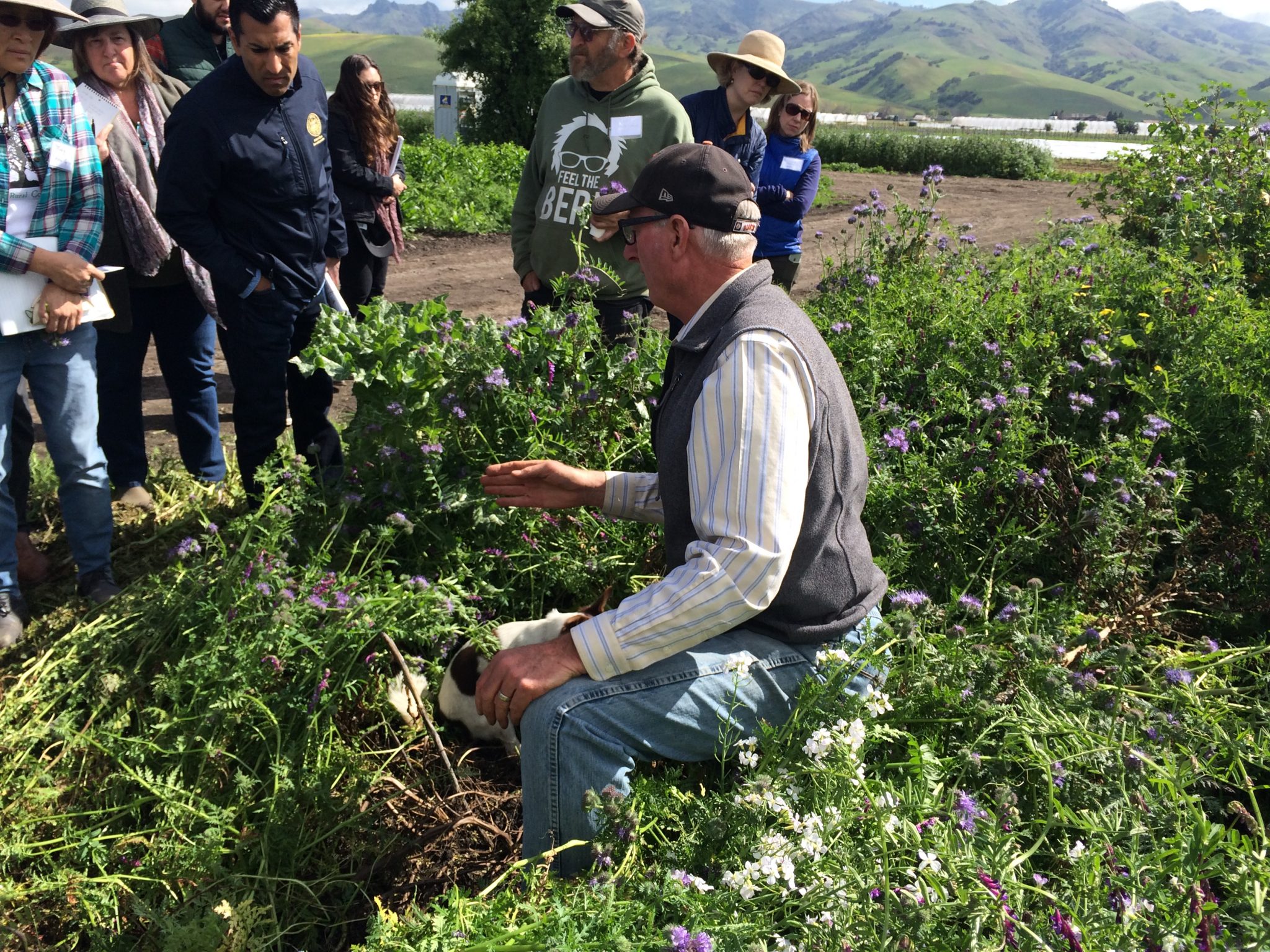 In the most recent edition of the “Dirt First Conversation Series” hosted by the Ecological Farming Association, four experienced and innovative organic farmers reported on their progress after two years of field trials in no-till organic, commercial-scale vegetable production. They are experimental and forward thinking, taking risks to pilot new ways of growing California row crops without tillage while maintaining or even increasing yields.

You can watch the recording on the EcoFarm website.

The four farmers represent a diversity of crops, geographies and growing practices.  Phil Foster of Phil Foster Ranches has 250 acres of organic fruit and vegetables near San Juan Bautista and Hollister. Paul Muller of Full Belly Farm in Capay Valley grows 400 acres with 80 different crops and livestock as an integral part of the system. Scott Park of Park Farming Organics has 1700 organic acres in the Sacramento Valley where he produces 10-20 different crops including processing tomatoes, grains, beans and vegetables. Tom Willey of T&D Willey Farms previously farmed 75 acres in Madera, California and currently consults with other farmers on no-till practices.

The large majority of specialty crop growers in California till their fields to eliminate weeds and loosen up the soil in preparation for planting. On organic farms, without the use of chemical herbicides, tilling is the predominant weed control method. However, tilling disrupts the soil structure and microbiological life and is a contributor to releasing soil carbon into the atmosphere, thereby contributing to climate change. Without healthy soil fungi and bacteria that provide plant nutrients, farmers rely more on external inputs like chemical fertilizers.  Also, soils disturbed with tilling often retain less water, a consideration for California growers facing yet another dry summer. The goal of reduced-till or no-till farming systems is to minimize soil disturbance while implementing alternatives practices that control weeds, provide ground cover and maintain yields.

Cover crops are a powerful tool in the toolbox—they are grown between cash crop rotations to provide soil nutrients, soil cover to limit weed growth, and can serve as a mulch and source of organic matter if left on the field to decompose when the next crops are planted. The farmers involved in this trial are experimenting in real-world situations with strategies such as cover crops and crop rotation. The challenge that follows is how to abate competition before planting a cash crop.

Organic strategies to remove cover crops and weeds before planting cash crops include:

Paul Muller of Full Belly Farms likened the no-till strategies to creating an “armor” for soil that keeps the surface covered, helps retain moisture for the microorganisms and pushes living roots of cover crops below the surface where they promote an essential balance of bacteria and fungi in the soil. This balance has been shown to improve yields. Both Paul and Scott Park emphasized that these practices are an investment in the long-term health of our agricultural lands versus the conventional farming model that maximizes short-term financial returns.

Promising findings and more trials ahead

The major success highlighted in this webinar was the significant yield and nutrient improvements observed in a no-till, plasticulture watermelon trial compared side-by-side to a control bed with reduced till at Phil Foster Ranches.

The plasticulture treatment resulted in higher soil moisture, temperature and nutrient availability (see Fig. 1). The results are significant because this is only one of two studies that have shown equal or greater yields in no-till systems compared to some or full tillage (see Fig. 2). The farmers intend to expand this trial next year.

Though this trial appears to be a step forward, Scott Park emphasized how context-dependent no-till farming is after growing cover crops in his system for 32 years and, in his own words, “spending a lot of time figuring out how to do things wrong.”

Ultimately, he has developed an effective cover cropping system with rice, vetch and wheat that significantly reduces tillage and increases soil carbon compared to the conventional model. This season he will run trials on grazing, multi-species and cash crops.

After farming for decades, these growers have immersed themselves in learning new ways to farm and are blazing the way in our understanding of climate-smart farming.

Be sure to catch future conversations in EcoFarm’s Dirt First series, and especially Digging into the Research of Small-Scale No-Till Farming Systems, which will cover the latest research in small-scale, intensive, minimal-disturbance, ecological farming systems.