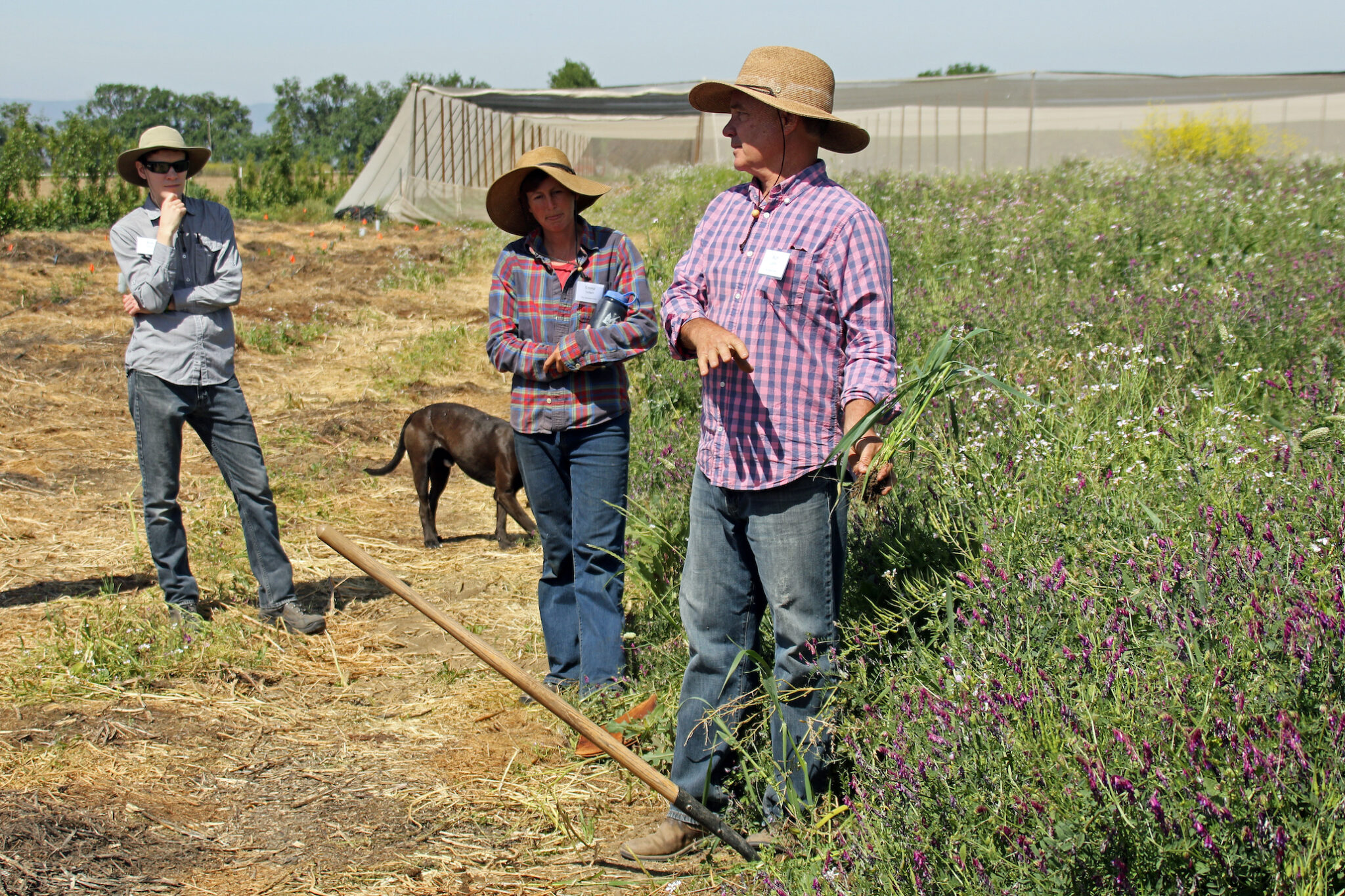 Rich Collins of The Collins Farm in Davis, CA hosting a

This blog was written with Rich Collins of The Collins Farm.

New research shows that winter cover cropping in processing tomatoes and almond orchards can help improve soil health while not increasing water consumption. Given cyclical, persistent drought in California that continues to worsen, there have been concerns that cover crops consume too much water. Cover crops are grown to be incorporated into the soil increasing soil nutrients, reducing the use of synthetic fertilizers and protecting soils during times of the year when commercial crops are not grown. There is also longstanding evidence that cover crops improve soil health and increase soil carbon sequestration. These findings show that indeed, tomato and almond growers in the Central Valley are able to grow a winter cover crop and reap the soil health benefits without a significant difference in their overall water needs.

Rich Collins of The Collins Farm near Davis, a CalCAN farmer advisor, hosted one of the study sites and shares his experience:

While I did not directly farm the field included in the study, winter cover cropping has been a longstanding requirement of our lease with the grower.  A diverse multi species mix of grasses, legumes and forbs was sown in the fall of each year.  We welcomed the opportunity to have multiple sets of smart eyes and minds studying the water dynamics of winter cover crops.  I have long suspected that they use relatively small amounts of water most of which would otherwise be wasted, primarily from evaporation and runoff.  This study scientifically validates that suspicion!

The research examined how the planting and maintaining of winter cover crops affects soil moisture and field evapotranspiration—the process of water evaporating  from the soil surface and transpiring through the plant into the atmosphere—from late fall to early spring on irrigated tomato and almond fields in the Central Valley. The study was conducted over a three-year period on commercial farms and research sites from 2016-2019.

The researchers studied three types of winter cover crop systems; 1) a cover crop in processing tomatoes fields; 2) cover crop planted in between rows of almond trees; and 3) allowing native vegetation, like grasses, grow in between the almond tree rows. These test fields were compared to bare control fields at the same site.

The researchers found that while soil moisture content varied, there were no significant soil moisture differences between the fields that were cover cropped and control plots during winter seasons. Similarly, there was no significant difference in evapotranspiration between the cover cropped and control sites overall and, in some cases, like in Davis, when there were very heavy rains at a point in the study period, water loss via evapotranspiration was greater in the bare control plot. This means that fields with winter cover crops can be more effective at holding more water on site during big rain periods, like we experienced throughout the state in December, 2021

In Jan/Feb of 2017 our fields were blessed with nearly 20+ inches of rain including some nine inches in just a five-day period in early January. Nearby conventionally managed,  bare naked fields shed copious amounts of rainfall, sending it into the regional drains and eventually out to the bay. During those heavy rains, no water ran off our 100+ acre field, as it was cloaked with a still young but protective cover crop.  Where did the nearly 200 acre feet of water end up?  The UC research says that some, though not much, was used by the cover crop. The rest infiltrated into the soil and beyond to recharge our precious groundwater aquifer.

The study found that the bare control orchard sites pooled water on the surface when it rained, compared to the almond orchards with native vegetation or a cover crop. Pooled water creates less than ideal farming conditions—i.e. delaying the timing of using machinery in orchards. In the trials with the winter cover crops, there was less soil compaction and better soil structure that improved water infiltration, avoiding the pooling and runoff experienced in the control sites. This can prove critical in the timing of early springtime spray operations in almonds orchards.

For growers with annual crops—like tomatoes—the water used by the winter cover crops was less than a singular irrigation event. The benefits of increased soil organic matter, reduced erosion and nutrient losses and overall improved soil health that comes with cover cropping do come with some new associated costs that row crop and orchard growers need to carefully assess.  Management complexity increases with the introduction of winter cover crops.  While this new research demonstrates that growers need not be overly concerned with the water budget element of cover crop management they certainly will need to focus additional resources and attention on their rotations, timing of operations, costs and equipment needs.

The researchers recommended that growers working with new almond orchards younger than three years that are not yet producing may find winter cover cropping to be a relatively easy investment in promoting good soil health.

What does this all mean?

Farmers, researchers and technical assistance providers have long known the soil health benefits of cover crops but the amount of water needed to establish and maintain the crop has not always been clear and, at times, has been a contentious debate as California grapples with persistent drought. This research helps shed a light on this question, demonstrating that growers in annual cropping systems and orchards can plant cover crops without any significant difference in the amount of water consumed. Granted, cover crops use water – as do all crops. However, the water they do consume is put to a much better use instead of evaporating or running off the field. Hopefully these findings will encourage more farmers to make an investment in the resiliency of their operations and adopt cover cropping for soil health benefits, helping draw down carbon into our soils– where it belongs and is sorely needed – as well as improving air and water quality by reducing erosion and in wet years contributing to enhanced ground water recharge.