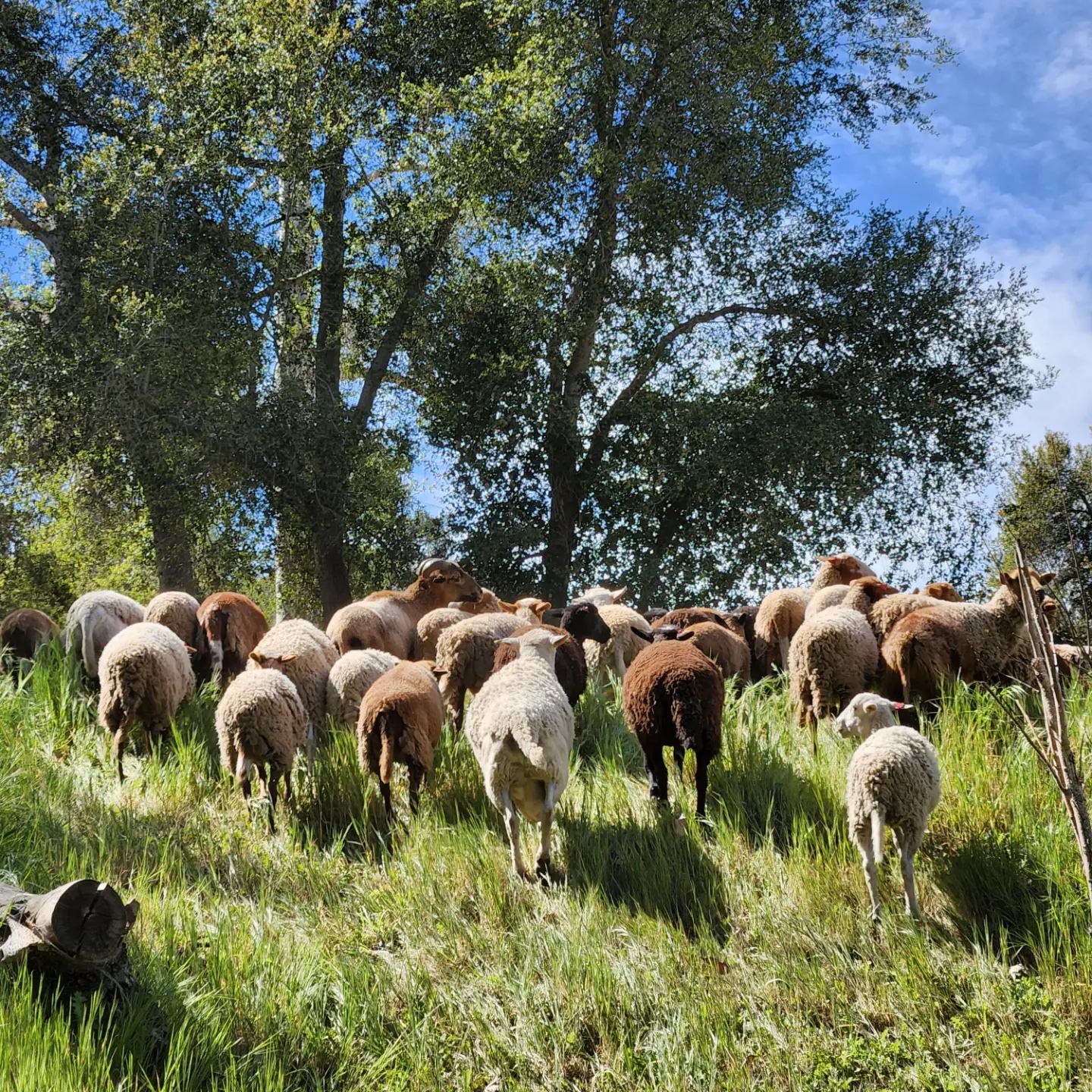 Michael Leicht is a contract grazier based in Ojai, California. He is the owner and operator of Ventura Brush Goats, where he grazes sheep and goats for weed abatement, ecological and soil restoration, and wildfire mitigation. Learning as he went, Michael grew his operation from a couple of dairy goats in his backyard in 2018 to 750 animals today that graze and fertilize across Ventura County. He is also the Co-Director of the Ojai Valley Fire Safe Council’s Community-Supported Grazing Program.

There is a wide variety of landscapes and locations that benefit from the positive impacts of grazing a “flerd” – a combination of sheep (flock) and goats (herd) – which include public parks and open space in the wildland-urban interface (WUI) and on grasslands and ecological conservation areas.

One of Michael’s current projects, in partnership with the Ojai Valley Land Conservancy, is grazing for ecological restoration and fire resiliency at the Ventura River Steelhead Preserve. This one-mile stretch of the river bed offers a refuge for the endangered South­ern California steelhead and a home for 29 other rare, threatened, or endangered species.

This past winter, in the project’s second year, Michael introduced 100 ewe and doe pairs (lactating sheep and goats) on 17 acres to reduce invasive Mediterranean forbs and grasses like mustard, wild oat, and brome grasses. These species germinate early in the season, stunting the growth of the native Amsinckia Intermedia wildflower, or common fiddleneck. In August, the animals will return to the site to target the invasive yellow star thistle, which competes with more desirable grassland species and, once dried out, acts as effective kindling for wildfire. The project partners expect a more favorable ratio of native to invasive plants and increased bird populations, which depend on the Amsinckia.

This site is seen as an anchor for a more significant native pollinator and wildflower corridor that the same partners are working on expanding across the Ojai Valley for habitat creation and wildfire resilience.

Michael noted that there are also other ecological benefits grazing programs can achieve, such as increased soil organic matter, soil carbon, and water infiltration and retention. He describes grazing as a way to pulse carbon from the atmosphere into the soil when appropriately timed in the winter with the growing season.

To achieve this effect, he uses a high stocking density for a short duration. The animals’ hooves gently break up the soil and incorporate their manure like “walking composters”. The roots of the grazed vegetation also add additional organic matter and nutrients to the soil. When the animals are removed to allow rest and regrowth, the plants grow back, drawing more carbon out of the atmosphere again and pulling it into their root systems and the soil. The animals can return to the site for a second time to reduce the vegetative fuel load again as the end of the spring leads into the drier, fire-prone summer season.

Between April and September Michael grazes for wildfire mitigation around homes and buildings, at the WUI, and in grasslands. Clients like homeowners’ associations and other public and private entities choose to invest in this public service because of its documented efficacy in transforming grasslands and other vegetated landscapes from highly flammable and effective fire spreaders into natural fire barriers.

Grazing as an alternative to hand crews, herbicides, and fossil fuel-powered equipment for vegetation management can be cheaper, emit fewer greenhouse gasses and offer increased fire mitigation benefits by removing the vegetation instead of leaving it onsite.

As wildfires in California become more severe and less predictable, the health of our communities, ecosystems, and food system is threatened. Contract graziers like Michael and his flerd offer an adaptive, nature-based solution for building fire resilient ecosystems and landscapes. However, these small, family-run operations that provide the essential public service of wildfire mitigation, while building soil health and restoring our grasslands, face various challenges that limit their ability to meet demand.

For example, the high cost and limited availability of public and private lands is a significant barrier for Michael who needs a secure, stable home base for his animals during the off-season. Implementing this work at scale also requires regional planning and collaboration between local organizations, on-the-ground practitioners, and state entities and resources.

Mapping, client and community outreach, and coordination across cities and counties, which includes practitioners in the planning, would increase the capacity among graziers to work more efficiently and consistently across a region. These efforts could help identify available land and prioritize grazing locations based on management goals. With proper support, Michael hopes to double the number of animals he shepherds in the next couple of years and to expand his grazing region north towards the Bay Area.

As part of the Ojai Valley Fire Safe Council, Michael recently co-hosted and attended a multi-stakeholder planning summit to discuss regional coordination as a key component of their Community-Supported Grazing Program (CSGP). You can read more about that effort on our blog here.