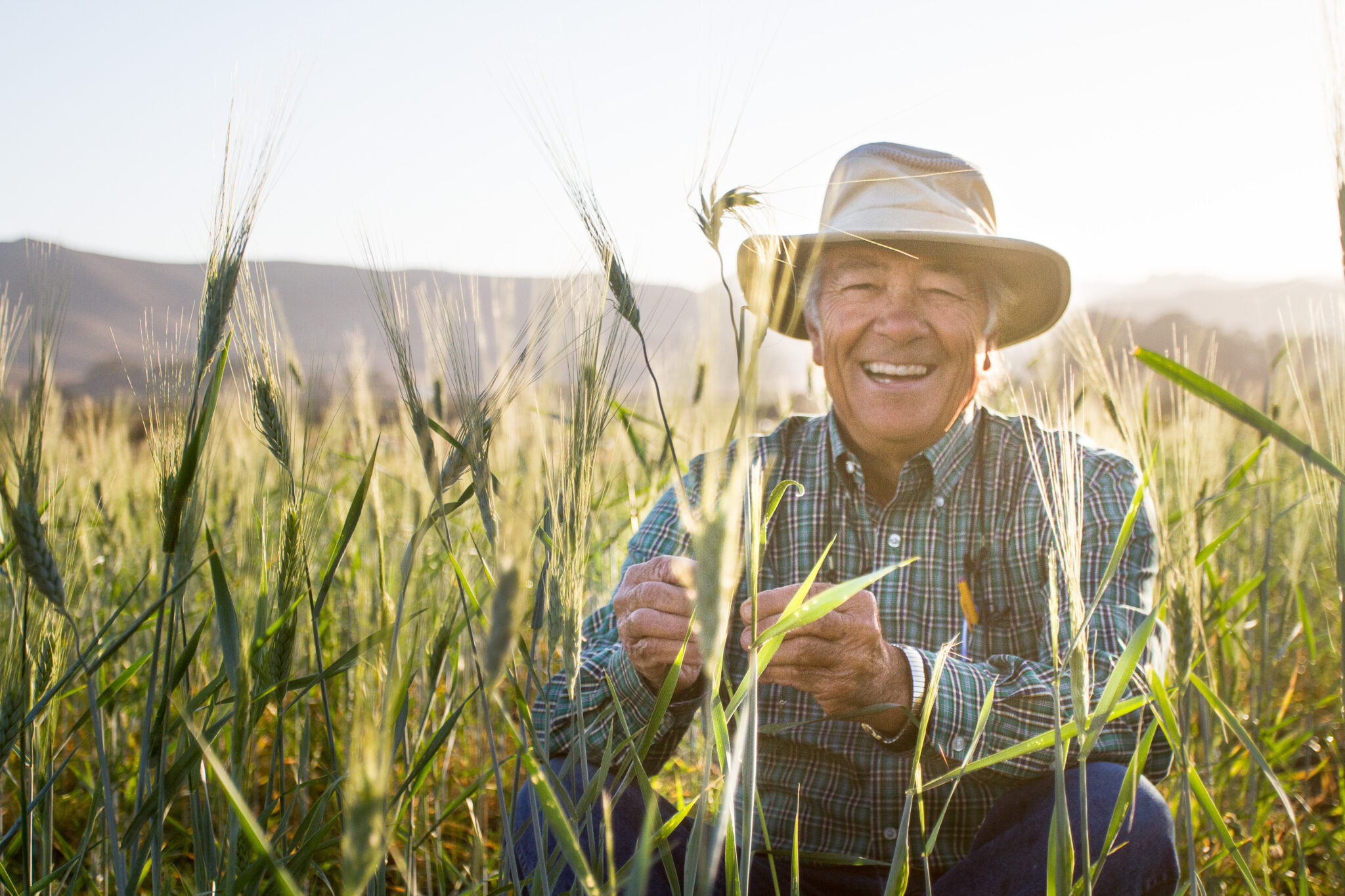 Larry Kandarian is a well seasoned farmer passionate about spreading the regenerative practices he uses at Kandarian Organic Farms to others across the state and the country. Larry cultivates more than 1,000 plant varieties including grains, beans, peas, herbs and spices, and integrates a small flock of sheep into his cropping systems to promote soil health and biodiversity.

He started farming conventional crops in the Central Valley in the 1970’s, but moved 22 years ago to 138 acres in San Luis Obispo County where he began using organic practices. It was a steep learning curve that changed his relationship with the farm ecosystem, the soil ecology and above all, the weeds.

The “drag” for low-till weed management

Instead of trying to kill the weeds that inevitably pop up across the farm, Larry works to manage their height while enjoying the benefits of their roots in the soil. He only tills 2-3 inches of each 30 inch row and plants in the furrows where there is more moisture instead of the more common practice of planting on top of the beds. Drawing on his skills as a mechanical engineer, Larry designed and built a unique tractor implement he calls a “drag” to support his low-till system. This tool cuts the tops of the weeds down that grow on the beds to a manageable level, reducing competition for water and light, while leaving organic matter in the ground and mulch at the surface.

To further promote water conservation, Larry applied for an Environmental Quality Incentives Program (EQIP) grant through USDA’s Natural Resources Conservation Service (NRCS) to install irrigation pipes, a water metering system and soil monitoring technology. The results have been significant, delivering more uniform and efficient water distribution across his 65 acres of irrigated cropland. He has saved about 30% of his pumping costs, reduced water consumption and increased yields on acres that previously received less water.

In addition to the hundreds of field crops Larry produces each year, he continues to push the limits on what can grow in the coastal Los Osos Valley microclimate defined by cloudy winters and average highs of 70-75 degrees during the summer months. This year he applied for a second EQIP grant to help him build a hoop house for tropical plants like turmeric, galangal and ginger among others. Though the application process was fairly straightforward with the support of the local NRCS office, the total number of farmers wishing to implement new projects consistently exceeds available funding, and he was not awarded the grant. Larry is optimistic about receiving the funds in the next round, but was concerned that the project ranking system was less than transparent. CalCAN is pushing for higher funding levels for the EQIP program in the 2023 Farm Bill with a priority for projects that promote biodiversity and carbon sequestration.

While the day-to-day production requires most of his time, Larry is also dedicated to sharing his approach to farming with the public and the next generation of farmers.

Grounded in the conviction that “seeing is believing” he wants to get people out to the farm “in bus loads” to share visually and verbally what regenerative systems look and feel like.

In a given month, Larry receives many visitors on his farm who come to work or admire one corner of the farm or another – and who always leave with a new understanding about what’s possible. He hosts everyone from student researchers, policymakers, and prospective young farmers to friends who harvest the wild medicinal herbs thriving at the edges of his farm, children (and adults) to gawk at the sheep, and advocates like myself to see policy implementation in action.

Larry would like to mentor and train young farmers more formally through on-farm education, demonstrations and peer learning, but is challenged by the expense and zoning burdens of building on-site housing. For him and dozens of other small farmers, the lack of available, affordable housing for those who work the land continues to be a significant limitation towards creating a stable, secure business model.

To share his work through a different venue, Larry successfully applied for a Healthy Soil Program Demonstration grant in 2022 to expand grassed waterways along the edge of the farm, to plant hedgerows for pollinator habitats, and to demonstrate conservation crop rotation including seeding perennial species and no-till. This project will include three field days to share the results with his farming neighbors and community. While Larry is excited to get started, he shared that the application process was difficult and confusing and without the administrative support he receives from his employees, this process would have been prohibitively difficult.

His final reflection during our interview was a firm call to urgently make it easier for farmers to adopt regenerative practices.

“A more feasible, less time-intensive grant application and implementation process is absolutely essential, especially if we want these grants to reach other farmers who have less resources and less support.”