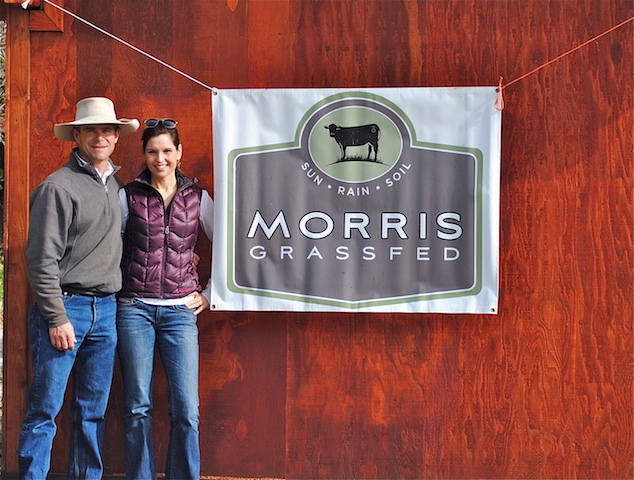 We are pleased to announce that San Benito rancher Joe Morris of Morris Grassfed Beef has won the 2012 Clarence Burch Award presented by the Quivira Coalition in New Mexico. The award recognizes individuals, organizations and others who have led by example in promoting and accomplishing outstanding stewardship of private and/or public lands. Joe is a CalCAN farmer advisor and was nominated by CalCAN for this prestigious award. We are thrilled that his innovation and leadership has been recognized.

By effectively using his cattle to manage the land for carbon sequestration, water infiltration, and wildlife diversity, Joe proves that agriculture—if properly managed—can provide solutions to some of our most pressing climate change challenges, enhance ranch resilience in the face of a changing climate, and provide multiple environmental benefits.

Joe comes from a lineage of ranchers stretching back five generations, the most recent of which was his grandfather who ranched into the 1980s. In 1991, Joe and his wife Julie moved to San Juan Bautista and have been managing the 200-acre family ranch ever since. Today, they lease an additional 7,000 acres and run 250 cows to serve their grassfed beef direct marketing business, as well as approximately 1,800 stockers.

Joe uses holistic management—a decision-making process that uses grazing and animal impact to manage watersheds— as an organizing principle in his ranching business. For example, he manages large and dense herds of cattle with fencing and water supply to mimic the grazing patterns that herds of herbivores used as they co-evolved with California’s native grassland ecosystems over millennia. By intensively and adaptively managing water and grazing patterns, he gets higher rangeland utilization, maximal forage productivity, and increased local food production.

Properly managed cattle grazing can increase grassland species diversity and productivity. It can also increase the soil organic content which sequesters carbon and also improves water penetration and retention, thereby reducing erosion and making more water available for plants which is especially important in arid regions like San Benito. In addition, there is evidence that livestock fed on high-quality forage instead of grain may emit less methane (a potent GHG) during their digestive processes.

As land conservationists, Joe and Julie both serve on the Farmer Advisory Committee of CalCAN. Joe is a co-founder and remains active in the Central Coast Rangeland Coalition. Julie is a fellow of the California Agricultural Leadership Program and works part-time as the Executive Director of Community Vision San Benito County.

Joe shares the award with Pati Martinson and Terrie Bad Hand, co-directors of the Taos County Economic Development Corporation in New Mexico. The 11th Annual Burch Award will be presented at a dinner ceremony on November 16, 2012, at the conclusion of the Quivira Coalition’s 11th annual conference in Albuquerque, New Mexico. More information about the conference and the award is available at http://quiviracoalition.org.