Heat Continues to be a Primary Farmworker Concern: Local and Organic Agriculture Can Be Part of the Solution 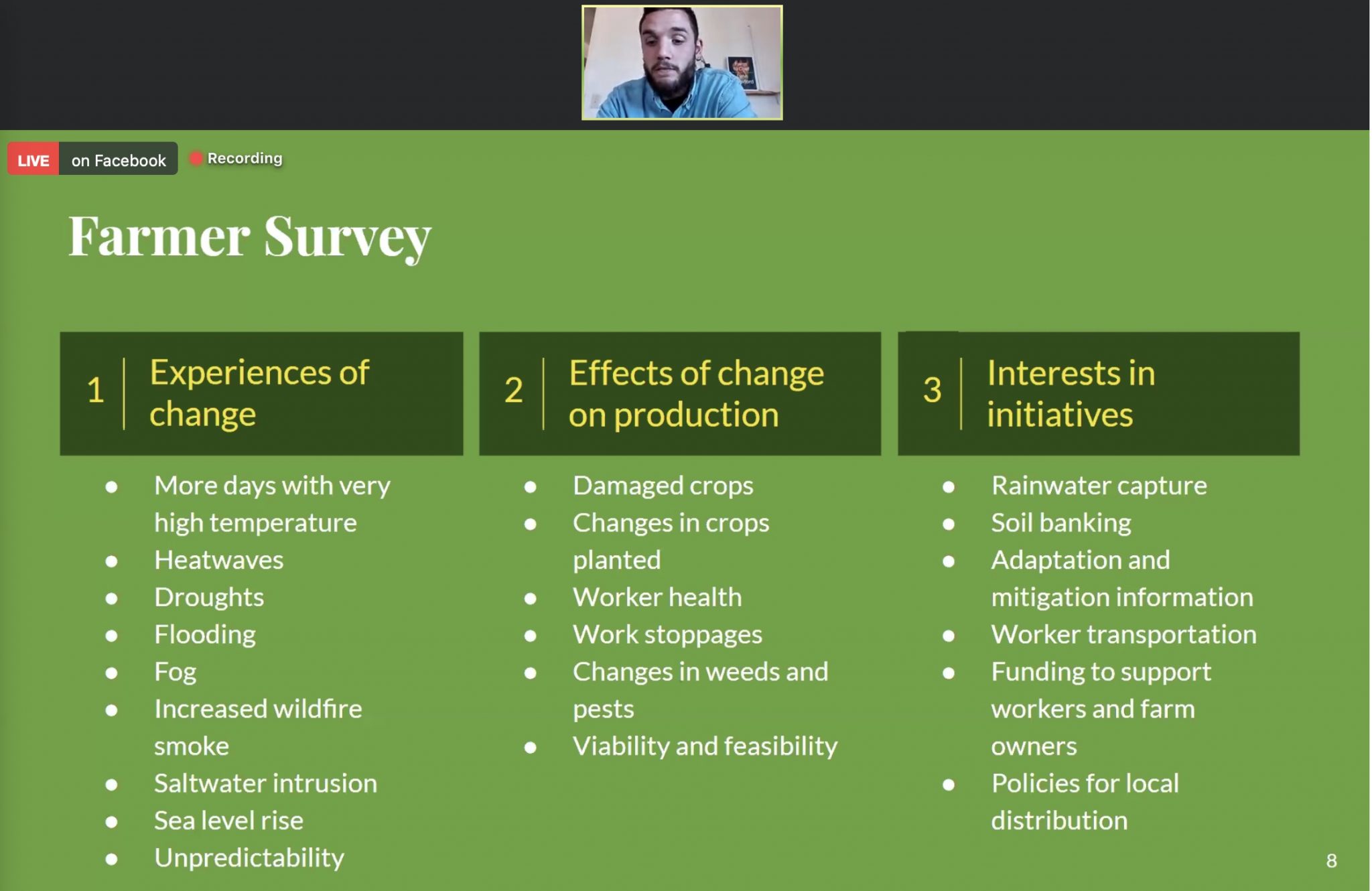 Farmworkers, farmers and community members in the Pajaro Valley recently gathered to deliver an urgent message: intense heat events caused by climate change continue to endanger farmworkers and action is needed to protect them and our food supply. Regeneración Pajaro Valley Climate Action, a grassroots climate action organization based in Watsonville, CA, hosted this two-hour bilingual event earlier this month – “Climate of Hope” featured art, music, a diversity of presenters and interactive polls with the audience and was a creative, virtual alternative.

Climate Impacts in the Pajaro Valley

To kick off the event, student researchers at the California State University, Monterey Bay shared results of a survey conducted in partnership with Regeneración, of Pajaro Valley community members, farmers and farmworkers. The researchers wanted to understand individual experiences in the face of a changing climate, how production is impacted and what initiatives to combat the climate crisis are most interesting.

The survey found that heat stress continues to be a major concern for farmworkers, even in a coastal area, followed by pesticide exposure. Many survey respondents stated they know the effects of climate change will get worse as years go on, and stressed how important it is to take action to curb it now.

Juan Hernandez, a farmworker in the Pajaro Valley, shared his experience working in raspberry production where the temperature inside the plastic tunnels commonly used to grow the berries could be 10-12 degrees hotter than the sweltering heat outside. Juan talked about getting nose bleeds and seeing fellow workers around him fainting. He felt powerless and stressed knowing that the solution to these severe heat stress symptoms was not as simple as drinking more water. This extreme heat also led to lost hourly wages: Juan would get his hours cut or have to leave work early if he felt too sick to keep working.

Following Juan’s moving and powerful story, a panel of speakers reflected on his experience and made connections about how organic farming practices can not only improve conditions for farm laborers but also curb climate change which is making extreme heat events more and more frequent.

Javier Zamora of JSM Organics has been farming organically for decades and shared how focusing on the health of his soil is valuable not only for the quality of what he produces, but also for his community. Javier offered advice to the audience for small actions that have a large impact in their communities: “Use less water, educate yourself about when to eat what, ask for more local foods, ask yourself where your food comes from. Whose hands are touching the food that comes to you?” Claudia Pineda Tibbs with La Eco Latina echoed the importance of Javier’s organic practices which use no synthetic pesticides, another major risk factor for farmworker health. Following up on Juan’s story, Dr. Flavio Cornejo of Salud Para La Gente Medical Clinic in Watsonville spoke to the impacts of heat stress on the farmworkers he treats.

Assemblymember Robert Rivas, who represents the Watsonville area and whose grandparents were farmworkers, joined the event, affirming his commitment to addressing climate change and the disproportionate impact on farmworkers. Assemblymember Rivas reiterated that the state needs to maximize agriculture’s solutions to the climate crisis, pull carbon from the atmosphere into our soils and vegetation, and address environmental justice by supporting communities that are disproportionately impacted by pollution and the climate crisis. Assemblymember Rivas has been a leader in advancing policies the support farmworkers and lift up agriculture in advancing the state’s climate change goals.

Local & Organic Agriculture as Part of the Climate Change Solution

The CSU survey noted several needs identified by farmers and farmworkers to address the impacts of climate change, including:

Many of the speakers throughout the event highlighted the importance of putting farmworkers at the center of climate adaption and planning, as they disproportionately bear the physical impacts of the climate crisis.

A Call to Action

Claudia felt hopeful about how the urgency of the climate crisis is compelling many community members, especially youth, to get involved in advocacy and push their representatives for bold action to address the climate crisis. Indeed, Regeneración continued to implore the attendees to act, asking in a final poll what action the audience could commit to taking, including writing their legislators, organizing, learning more about advocacy organizations, and a number of other possible actions. It takes the dedication and partnership of community-based organizations like Regeneración, policymakers, researchers and agriculture communities to ensure and protect farmworker health.