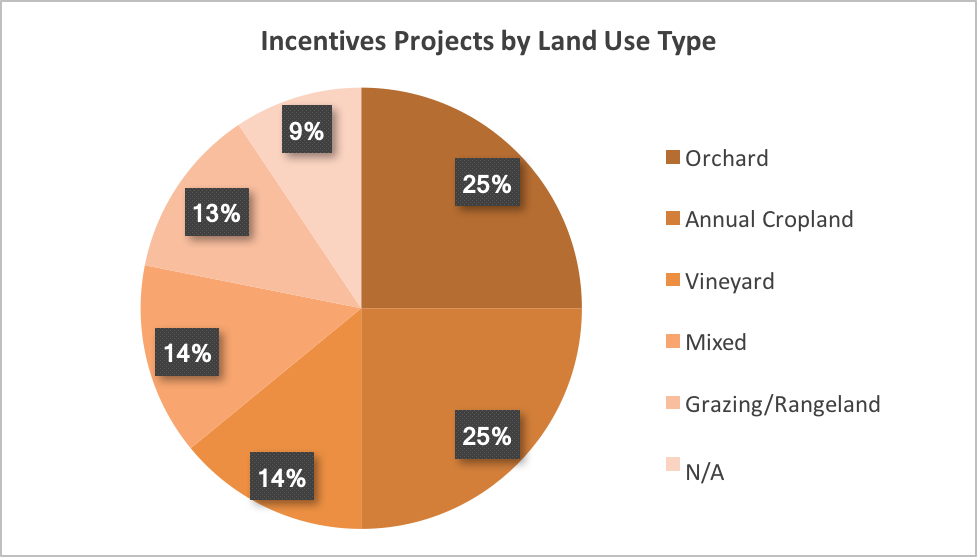 The California Department of Food and Agriculture (CDFA) announced its first round of grants for the Healthy Soils Program last week. In our first blogpost about the awards, we shared a summary of the awards by project type (incentives versus demonstration) and a breakdown of the awards by county. In this blogpost, we share a preliminary analysis of the distribution of the awards based on land use type and the practices projects plan to adopt.

This preliminary analysis is based on our interpretations[i] of the one-paragraph project descriptions provided by applicants, which you can read here:

As seen in the pie chart below, the 64 incentives projects are fairly well distributed across the major agricultural land use categories in California, with a quarter of the awards going to orchards, a quarter to annual cropland, and 13-14% each to vineyards, grazing/range lands, and mixed land use operations. Nine percent of project descriptions were too vague to determine their land use.

Cover cropping is by far the most popular practice with more than half (39) of the projects planning to adopt it. Compost applications to perennial crops (21) and annual crops (18), mulching (14), and hedgerow planting (16) are also quite popular, with more than a quarter of projects including those practices. The “herbaceous cover practices” (e.g. contour buffer strips, field border, filter strip, etc.) seemed to be the least popular, with at best a handful of projects planning to adopt those practices. However, it is important to remember that in order to be eligible for any of the “herbaceous or woody cover practices,” an applicant had to adopt or maintain an existing “soil management practice.” This likely prevented some farmers and ranchers who were interested solely in the “herbaceous or woody practices” from applying.

All Healthy Soils demonstration projects require the on-farm adoption of an eligible practice plus outreach and education for 120 fellow farmers and ranchers over the course of the 3-year project period. Type A demonstration projects, which were eligible for up to $250,000 grants, also required greenhouse gas monitoring to be done with the practice. Type B projects, which do not require a research component, were eligible for up to $100,000 grants. Awards were nearly evenly split between Type A (10) and Type B (12) projects.

Similar to the incentives projects, more than half of the demonstration projects (14) will be adopting and demonstrating more than one practice.

Excitingly, cover crops, mulching, compost application to annual crops, perennial crops, and rangelands, and reduced-/no-till will be demonstrated and researched on numerous sites across the state. In total, 12 out of the 17 eligible practices will be adopted on demonstration projects.

That is all the analysis we will be publishing about the awards for now. In the new year, we will begin to tell the stories of this first round of Healthy Soils award recipients, issue recommendations to improve the program, and continue to advocate for restored funding for the program starting in Fiscal Year 2018-2019.

Want to tell us your story of receiving a Healthy Soils grant? Or help us advocate for this exciting program in 2018? Send a note to Brian@calclimateag.org.

[i] Given the brevity and variability of the project descriptions – some were significantly more descriptive than others – we were forced to make educated guesses about how to categorize some of the projects. In the limited cases where there was too little information to make an interpretation, we categorized the project as not available (N/A), which you will see reflected in the charts above. In sum, we think this analysis is useful as a starting point for discussion and reflection, but should be considered approximate.