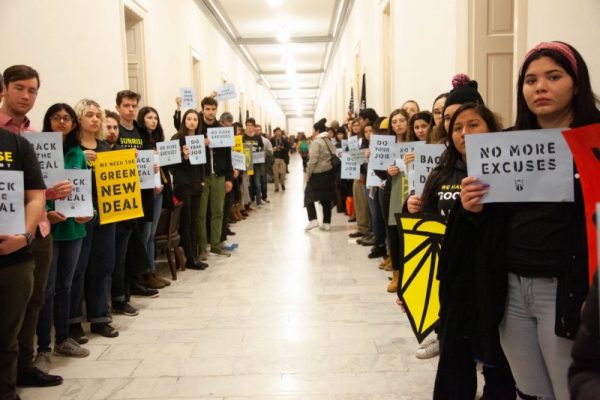 What is the Green New Deal?

The Green New Deal (GND) is a Congressional resolution put forth by Democrats that calls for fully decarbonizing our economy while creating millions of jobs and addressing the needs of communities most immediately impacted by the effects of climate change. The resolution follows the Intergovernmental Panel on Climate Change’s (IPCC) 2018 report that predicts a 1.5 degrees Celsius increase in global temperatures between 2030 and 2052, with serious consequences for agriculture, which is responsible for 9% of our national GHG emissions.

Representative Alexandria Ocasio-Cortez and Senator Edward J. Markey, who co-authored the Green New Deal resolution, are calling for swift and decisive action to better address the immediate impacts of such a rise in global temperatures. The call for action is supported by groups such as the Sunrise Movement, a youth-led organization that points out that the current fossil-fuel intensive economy imperils the future of young people globally. Among the principal objectives of the GND is to reduce human-generated GHG emissions by 40%-60% from 2010 levels by 2030 and to obtain net-zero emissions by 2050, meanwhile stimulating the green economy and employing millions of people.

The GND outlines the following for climate and agriculture:

(G) working collaboratively with farmers and ranchers in the United States to remove pollution and greenhouse gas emissions from the agricultural sector as much as is technologically feasible, including—

(i) by supporting family farming;

(ii) by investing in sustainable farming and land use practices that increase soil health; and

In response to the GND, Senator Dianne Feinstein introduced her own Climate Change Resolution. Feinstein’s resolution contains agriculture and its potential mitigation practices generally, pledging to maximize “the removal of greenhouse gasses from the atmosphere through improved agricultural soil management” and to focus on “eliminating all avoidable emissions” produced by anaerobic digestion. However, the resolution falls far short of the scale and depth of action necessary to address the need to reverse course on increasing emissions within the next decade.

California state legislators recently introduced their own Green New Deal Resolution and Bill in the state capitol. In just the past few years, California has experienced unprecedented droughts, wildfires, and heat waves, which climate scientists say have been exacerbated by and are likely to continue worsening under climate change. “In California, we know business as usual won’t stop climate change. The science is clear: unless we take immediate and bold action, the safe and clean future we envision for our children and grandchildren will not exist,” says Assemblymember Todd Gloria, the author of the California GND resolution. Similarly, Assemblymember Rob Bonta, who is authoring the California GND Bill, called broadly for a “massive investment in the drawdown of greenhouse gasses,” leaving the door open for more specific plans to realize this goal.

Questions hover as legislators behind the GND work to create policies that respond proportionally to the sweeping threats outlined in the IPCC’s reporting, yet remain feasible enough to garner political support. Many advocates for the GND are pushing for a total overhaul of our economy, claiming like Nicole Ghio does, that “there is no room for half-solutions of the past.” Part of this strategy is laid out by New Consensus, a network of activists and analysts busy giving voice to the new worldview behind the GND, “The obstacles to getting [to a better future] are political, not technical.” The GND calls on the government to not only create policies but goals that comprehend the existential threat we face in the form of climate change.

Some versions of the GND, like that presented by Data for Progress, include agriculture-related emissions and potential mitigation practices, calling more specifically for 50% methane capture by 2040 and the expansion of sustainable farming and soil practices by 30% by 2030. Fred Lutzi and Robert Jensen call for redefining the current “eyes-to-acre ratio” standards in industrial farming. Encouraging smaller, diversified farms with more farmers working per acre through economic incentives and market-demand is an important step toward reaching the sustainable farming and soil practices outlined in the resolution. Part of this shift would require a deeper look into the $13 billion currently spent in crop subsidies and farm insurance, which encourages the continued dependence on unsustainable farming practices.

As an industry, agriculture is uniquely positioned to respond to the humanitarian and environmental threats outlined in the IPCC report and should be part of any GND proposal. California, which has led the way in agricultural climate policy, has examples to offer the nation for how investments in our farmers and ranchers can go a long way in reducing our GHG emissions.