Farmer Organizing Across the U.S. to Advance Healthy Soils Policy 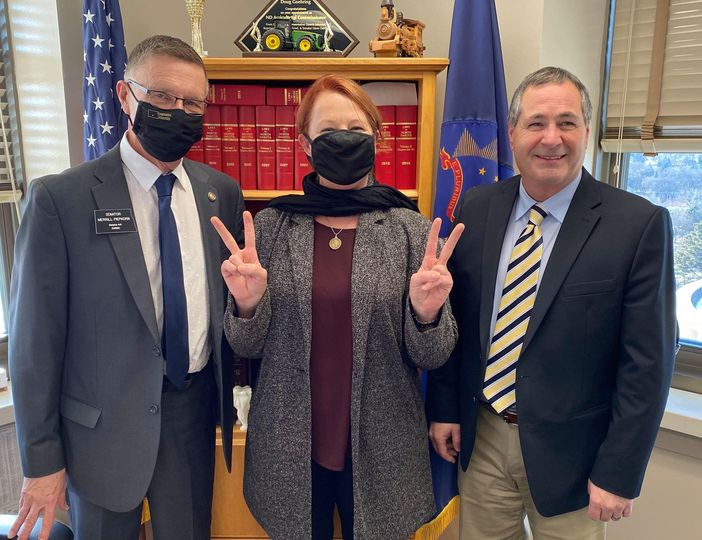 The National Healthy Soils Policy Network, founded and led by CalCAN, is a group of 24 farmer-centered organizations around the country mobilizing farmer voices in support of healthy soils state policy. CalCAN distributed 25 mini-grants in the past two years (with another dozen planned in 2021) to support farmer outreach, education and advocacy. What follows is a summary of the impact of these grants, written by our Network Coordinator Margot Riphagen. Read more about the Network here.

Farmer Organizing Across the U.S. to Advance Healthy Soils Policy

In the past year, members of the National Network have done incredible work to advance a healthy soils policy agenda in the face of many challenges. The pandemic meant that advocates were unable to conduct legislative meetings in person or bring farmers and ranchers together to coordinate efforts, and the capacity of legislatures was diminished as were many state budgets. These challenges also came with opportunities, including the ability to use virtual tactics to engage members in more rural areas and include them in meeting and organizing efforts, and to experiment with virtual farm visits for legislators. Five of these campaigns successfully passed bills in 2021 to advance healthy soils practices and all of our members grew their base through organizing, engagement events and virtual tours.

Even though the ultimate goal of our network is to pass state-level policies, we have learned from experience that policy without a strong backbone of activated farmers and ranchers does not compound wins in the way that true organizing does. Our grants imposed few restrictions on how the money was spent, giving organizers flexibility to adapt to the dynamic political context and deepen and expand their roots to build the foundation for future years.

Below are some highlights of the state-based campaigns:

Illinois Stewardship Alliance focused on  SB 2474, a bill to allocate over $1 million annually from an existing state conservation fund to implement the state’s Nutrient Loss Reduction strategy, paying for water quality monitoring, outreach and education, grants and technical assistance for conservation practices, and to fund the Cover Crops Insurance Premium Discount Program. While the bill did not pass, they laid the groundwork for re-introduction in 2022. They held virtual farm tours, virtual farmer-led sessions to develop organizing skills, pass a policy agenda and begin racial justice and equity work and held a virtual farmer week of action, resulting in 12 new bill sponsors.

Kansas Rural Center focused on HB2310 that would create the Kansas healthy soils fund and the Kansas healthy soils initiative. They conducted a grower survey about farmer attitudes towards soil health and possible government incentives for soil health practices and reported the results back to legislators. They organized a farmer panel for Kansas legislators, featuring their input on soil health practices and what government involvement would be helpful to them as producers. Though the bill did not pass, they built a network of farmers, agencies and organizations to influence future policy.

The Fair Farms Campaign focused on SB483/HB264, which encourages an increase in composting infrastructure and requires the largest food waste generators to send their waste to composting facilities. HB8 requires the use of Regional Greenhouse Gas Initiative (RGGI) funds for the Maryland Healthy Soils Program, providing a revenue source for incentives for farmers using soil health practices. SB482/HB264 passed, and HB8 did not. The strategies they employed included virtual meetings with legislators, key staff, and farmers on the bills, and organized written testimony from farmers and gathered their input on bill language.

NOFA-MA focused on a bill to establish a Healthy Soils Program to provide education, technical assistance, and financial incentives to farmers and land managers who utilize healthy soil practices. Though the bill stalled during the pandemic, the Healthy Soils Program was established as a component of the legislature’s economic development process with an initial $100,000 allocation. This success was in part the result of organizing a cohort of farmer-lobbyists that had been cultivated over the past several years.

Land Stewardship Project’s policy priority was passing HF 701 that would establish soil health goals for the state, carry out soil health monitoring, and establish a program to award funding to soil and water conservation districts to incentivize on-farm soil health practices. Funding priority would be given to socially disadvantaged and small- and mid-sized farmers. The bill is currently on hold, and elements of it are being incorporated into other bills. Farmers consulted on bill language and strategy in a series of listening sessions and a survey. LSP organized a dozen farmers to testify at hearings, held nearly a dozen virtual in-district farmer-led meetings with legislators, and placed media stories featuring farmer members.

Northern Plains Resource Council supported SB 180 which would establish a committee to conduct a study of policies and practices to improve soil health, barriers to adoption and make recommendations to the state’s Environmental Quality Council. This bill requires the inclusion of farmers and ranchers on the subcommittee, as well as an organization that advocates on behalf of small-sized to mid-sized farmers and ranchers, and tribal representatives, among others. While the bill did not pass and may be re-introduced, NPRC engaged farmer and rancher advocates in crafting bill language, championing the bill and participating in a Soil Summit.

New Mexico Healthy Soil Working Group played a lead role in advancing HB 89 which gives taxpayers the option of contributing a portion of their tax refund to the state Healthy Soil Program. This Working Group launched and supported a farmer cohort of soil health champions. They sent action alerts to a large network of producers and others, placed public service announcements that ran on 18 radio stations across the state, and held virtual public educational events about soil health.

NOFA-NY focused on A05386, the Soil Health and Climate Resiliency Act, which passed in 2021 and establishes the soil health program to encourage and educate farmers to improve the health of their soil and be more resilient to climate impacts by improving and maintaining water management systems and soil health and resiliency. They organized virtual lobby meetings with farmer constituents and their state representatives, an advocate training webinar for NOFA farmers and others, action alerts, and a backgrounder on the bill.

Dakota Resource Council supported HB 2342 which would establish a healthy soils program to award grants to technical assistance providers to educate and support farmers with soil health practices, carry out soil assessments, establish a network of soil health champions, and seek sources of funding for grants to farmers. Priority in awarding grants under the program would be given to serving young producers, veterans, small farms or ranches, and economically or socially disadvantaged communities. While the bill did not pass, they plan to try again in 2023. They built a robust network of farmers through the establishment of a farmer healthy soils committee, providing stipends to farmers for travel to attend soil health conferences, and mobilizing farmer advocates for the bill.

OEFFA laid the groundwork for advancing future healthy soils legislation, with an emphasis on reaching out to conventional producers who will be critical in garnering Republican support in the Ohio legislature. They currently have legislation in development and held a half-day virtual workshop titled “Make More Money by Investing in Soil Health” attended by over 100 farmers. They are cultivating a group of soil health ambassadors in strategic regions of the state who will serve as mentors, models and advocates of healthy soils practices.

OrCAN farmers focused on making recommendations for agricultural solutions for inclusion in the Oregon Climate Action Plan. They gathered input on the recommendations from farmer members using a survey, information and discussion sessions (including one session for farmers of color only), and connecting producers with agency focus groups. OrCAN will build on this organizing and they plan to introduce a soil health bill in 2022.

This coalition of Vermont-based organizations collaborated to influence the state’s Soil Health and Payment for Ecosystem Services Working Group that will make recommendations to the state legislature that could lead to future legislation and incentives. They organized farmer advocacy trainings and a virtual “State House to Farmhouse” legislator education day, supported farmers on their testimony to the Working Group, launched a new Soil Health Policy Network, and offered stipends for BIPOC farmer to support their involvement in healthy soils policy development and advocacy.