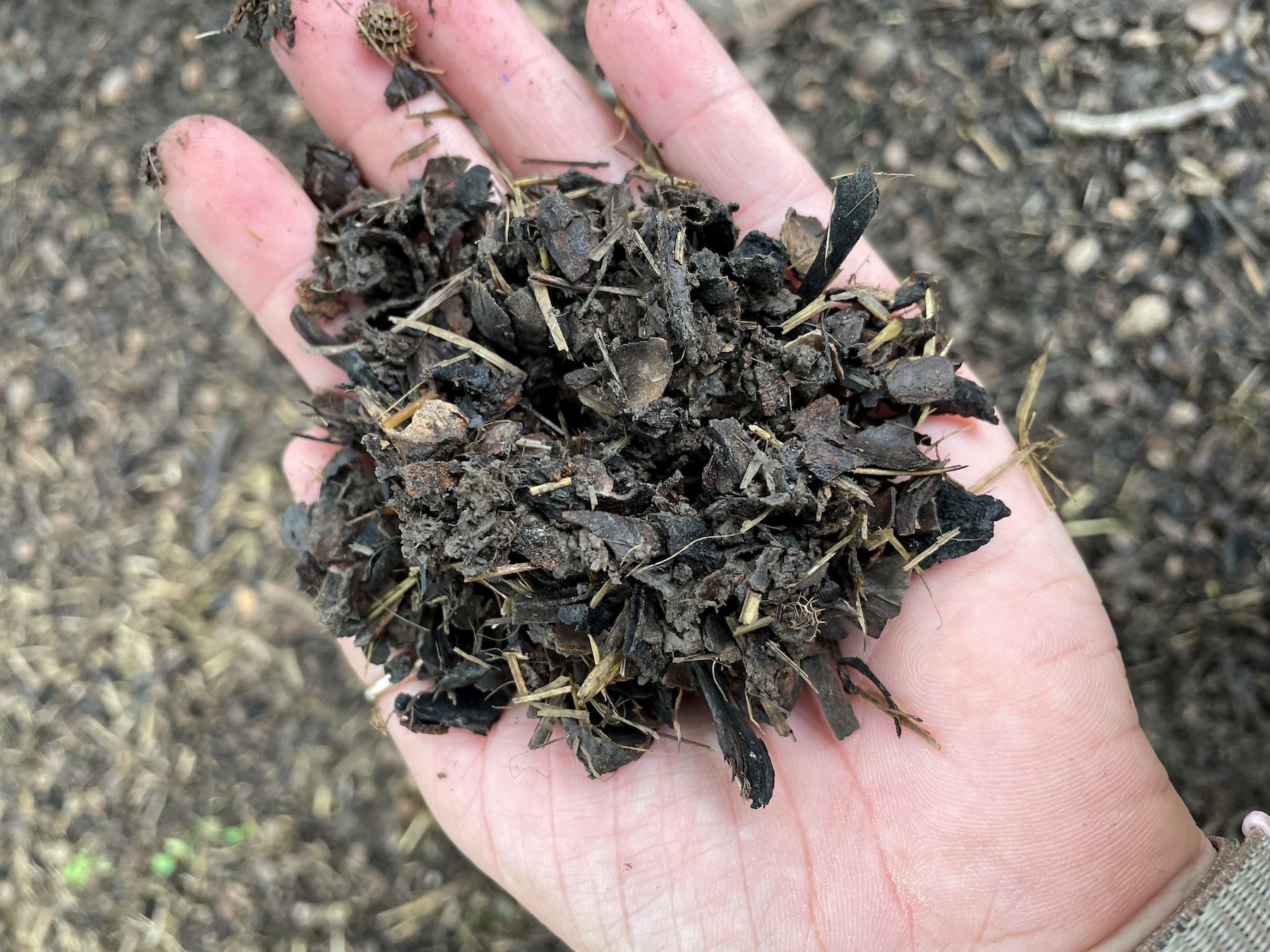 A sample of the soil on Leonard Loewen Farm

Leonard Loewen is a farmer in Glenn County and has been working the land since childhood. He started his own farm at the age of 20 and has been operating 110 acres of walnuts since 2013. Though his farm was conventional when he began, he became interested in reducing the amount of synthetic fertilizers and pesticides needed to sustain the orchard. Between his own curiosity and the advice from his farm manager to consider compost as an alternative source of fertility, Leonard started by applying compost to two orchard blocks. He noticed his yields rise and ultimately determined that the soil fertility benefits from compost were worth the cost.

To continue building the nutrient content and soil health in the orchard, Leonard stepped into the world of cover crops. The mix of legumes, grasses and brassicas he has been planting for the past five years between the rows of walnut trees attract beneficial insects and increase water infiltration in his orchard, minimizing pools of water collecting in certain places after heavy rains.

In 2018 Leonard discovered the Healthy Soils Program (HSP) and successfully applied for a grant to introduce compost to the 32 acres he hadn’t yet treated, as well as mulching the 68 acres where he was already using compost. This combination of practices has further increased water holding capacity and produced a dark, nutrient-rich layer at the top of the soil, likely from decomposing organic material. The mix of cover crops he was already using and the mulch applied through the HSP grant create conditions in the soil where the carbon and organic material are captured instead of being released into the atmosphere.

Leonard reflects that as he has adopted new practices, his mindset has also changed. He’s much more aware of the high levels of synthetic pesticides and fertilizers his fellow farmers apply to the landscape around the state. As he witnessed the benefits of keeping his soil covered with crops and mulch, he became more aware of the bare soils and the high levels of nitrogen applied to his neighbors’ fields, and grew concerned about the potential for the leakage of nitrates into groundwater.

“Many farmers will never start these practices just because of the cost, but if they knew about a program that will help them start, they might be more open to trying it. The multiple benefits and results then justify continuing the practices.”

With the help of the Healthy Soils Program, Leonard is working towards organic certification and plans to continue building his soil health through cover crops, mulching and compost. However, as he continues the complex process of transitioning his farm, he is left with a number of questions about how long the soil health benefits of mulch will last after application and where to secure guaranteed chemical and pest free mulch, as it’s been difficult to find in his area. With unpredictable market rates and weather patterns, he also wonders if the cost of mulch and compost will continue to bear out in the future after his Healthy Soils grant funding.

To continue advancing work on his farm that helps mitigate and adapt to climate change, Leonard is creating a carbon farm plan in partnership with Glenn County Resource Conservation District. Thanks to Dana Yount, a technical assistance provider for climate smart agriculture at the Glenn County UC Cooperative Extension, for connecting us to Leonard and supporting his important work. Check out dozens of other Farmer Climate Leaders who have received Healthy Soils Program grants on our leader webpage.