Farmer Fridays: In the Field in Fresno 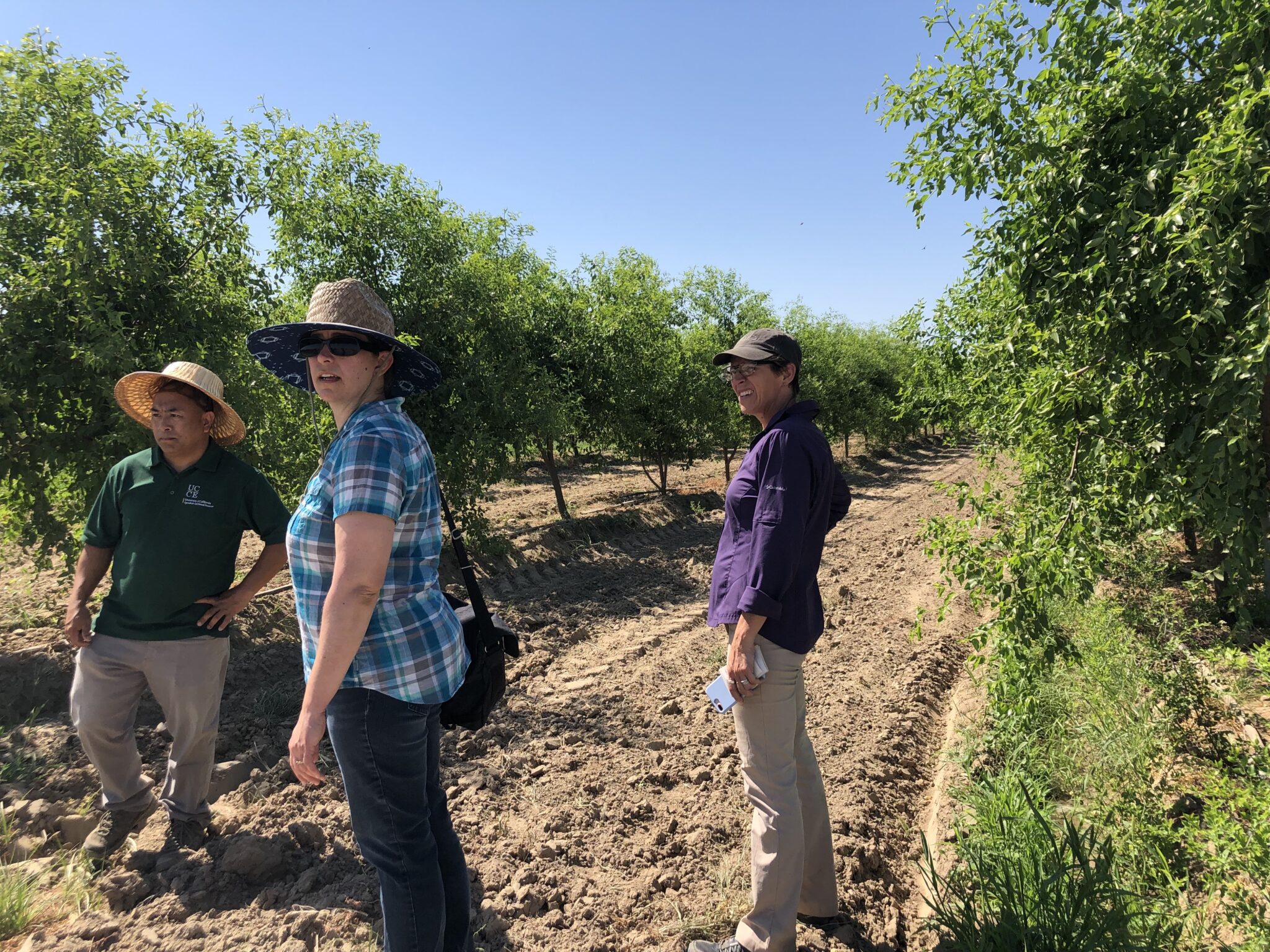 In the field with UCCE Small Farm Advisors, Michael and Ruth.

When Tessa Salzman (CalCAN’s Field Organizer) and I traveled to five farms in the Fresno area last week, we didn’t expect to participate in a food relay. But to our delight, we became couriers of bountiful produce between the farms, and learned about each operation along the way.

We started off by meeting a team of seven community outreach specialists and researchers with the UC Cooperative Extension’s Small Farms and Specialty Crops Program in Fresno and Tulare. Led by farm advisor Ruth Dahlquist-Willard, the group provides a range of services to small-scale and diversified family farms including technical assistance, research on specialty crops, and bilingual and culturally relevant training (which is particularly important for the large community of Southeast Asian, Latino and immigrant farmers). Ruth is also a science advisor for CalCAN and she and some of her team consistently provide valuable input to CalCAN on our policy campaigns and to legislators and agency staff on the impact and implementation of the state’s Climate Smart Agriculture programs.

We were greeted at the first farm by Yeu Tchieng who owns a 20-acre farm and produces dozens of Southeast Asian vegetables such as bitter melon, opo, sinqua (luffa) and sunchokes. He and Michael Yang, the Hmong Agricultural Assistant on the team, delighted in showing us the produce and describing how to cook it. We also learned about Yu’s compost applications that greatly improved the vitality of his plants, particularly with the sunchokes which produced larger root balls than usual and cut this year’s fertilizer applications by about 50%. Yu also used a SWEEP grant to install an energy-efficient pump and drip irrigation to replace his labor- and water-intensive furrow irrigation system.

We left loaded down with dozens of vegetables and moved on to visit Gianina and Teng Thaoxaochay who, 30 years ago, were one among the first Hmong farmers to immigrate to Fresno. They now grow mainly crops popular with Western consumers at farmers markets. Their Healthy Soils grant last year paid for cover cropping and compost applications, and they are so convinced of the value of using compost that they bought their own compost spreader. Gianina told us “Our neighbors thought we were crazy because the plants were small at first, but after a couple of months when the compost started breaking down and adding nutrients to the soil, our squash were twice as big and the plants lived for an extra month.”

As the temperature approached 110 degrees, the UCANR and CalCAN team made a final stop at the African American Farmers of California incubator farm where we talked with founder Will Scott who also farms nearby. The site is home to a number of beds planted by new farmers in the area who get a range of services to help them get into and stay in the business. With a recent Healthy Soils grant, they grew cover crops last winter, applied compost, and have plans to install a hedgerow of fruit trees this fall with the help of the Small Farms team. As Will put it, “If we are going to the work of planting all those trees, we want to get some fruit!”

After taking a short afternoon siesta, we headed to Kingsburg to see Steve Fukagawa, a CalCAN farmer advisor who took over his father’s organic stone fruit operation a couple of decades ago.

Steve invited several raisin grape and stone fruit farmers from the area to share stories about their practices over some food and drink. The conversation ranged from the depth of wells to how to deal with nematodes and low prices for grapes. Steve described how he makes compost tea and uses it as a foliar spray or applies it as fertigation. We shared some of the bitter melon, and he told us later that he cooked it in oil, salt and garlic like he remembers his grandfather doing. We left his farm with a 25-pound box of pluots, plums and peaches.

On my way home the next day, I stopped in for a kitchen table visit with Benina Montes, a fifth-generation farmer at Burroughs Family Farms just east of Merced, where they grow organic almonds, olives and pastured eggs. With her four children coming in and out, and over a bowl of fresh fruit crisp, Benina told me about the 750 sheep she’d just added to the farm for diversity and soil fertility and how they’ve been experimenting with using them in the orchards to graze down their winter cover crops. She and her kids loved the bags of fruit I left with them from Steve’s farm, and she sent me home with an assortment of flavored almonds. The following week, Tessa and I brought the almonds and lots of stories from the field to our first in-person staff meeting in 15 months. This odyssey reminded me of the generosity, adaptability and innovative spirit of the farmers in our CalCAN network and how much we rely on their experience to ground-truth our policy work.

A confession: I kept the chocolate-covered almonds.