The State Assembly took an important step last week towards recognizing and remedying centuries-long injustices for people of color and women in agriculture. By building equity priorities into the California Department of Food and Agriculture’s (CDFA) responsibilities, staffing structure, and programs, AB 1348 would move us closer to ensuring that all of California’s farmers will have access to state resources, including the state’s Climate Smart Agriculture programs.

California’s farmer and rancher community is rich in its diversity. California has the largest population of Asian farmers in the country and ranks third in the nation for Latino farmers. Women manage roughly one out of five farms in California.

Farmers of color and women farmers were often denied land ownership in the early 19th and 20th centuries. More recently, many have experienced disproportional delays or denial of government loans. That legacy of prejudice will persist for many years to come because of the key role inheritances and capital have played in this era of “get big or get out” agriculture and rising land prices.

Still, even with an uphill battle ahead of them, an increasing number of people of color and women are pursuing their entrepreneurial aspirations and attempting to farm across California.

Using the federal definition of socially disadvantaged farmers and ranchers as a model, AB 1348  takes several important steps toward ensuring such farmers and ranchers will have the opportunity to shape and make use of CDFA’s programs, including the four climate-smart ag programs (SWEEP, Healthy Soils, Dairy Methane, and SALC):

“Farmers of color have historically not had equitable access to land and other resources necessary to conduct farming in California, and that legacy of prejudice persists… Existing federal agricultural policies have failed to provide sufficient and appropriate technical assistance and financial support… for socially disadvantaged farmers and ranchers.”

The bill ensures “the inclusion of socially disadvantaged farmers and ranchers in the development, adoption, implementation, and enforcement of food and agriculture laws, regulations, and policies and programs.”

AB 1348 requires that the Secretary of Agriculture create a position within the department’s executive office to support the efforts of the bill.

This information includes opportunities provided by a variety of state and federal agencies for socially disadvantaged farmers.

It’s time for California to take an active stance in supporting farmers of color and women farmers in our diverse agricultural community. As pressures mount on farmers to adapt to climate change, it is more important than ever to ensure all of California’s farmers have access to the resources to help them do so.

Many people deserve credit for getting the bill through the first house with such strong support. First: the California Farmer Justice Collaborative, a group of farmers of color and organizations representing farmers across the state, which conceived of the bill and mobilized the coalition of organizations supporting it (listed below). Second: Assembly Member Aguiar-Curry (a farmer herself) and her co-authors (Assembly Members Caballero, Eggman, Limón, and Mathis) for their leadership in moving the bill through the Assembly. If any of the latter are your representative, please consider calling to thank them.

AB 1348 is pending referral in the Senate, but will likely be heard in the Senate Agriculture Committee in the next two weeks. If your Senator is on that committee, please considering calling them to urge their support.

Find your representatives and their office numbers 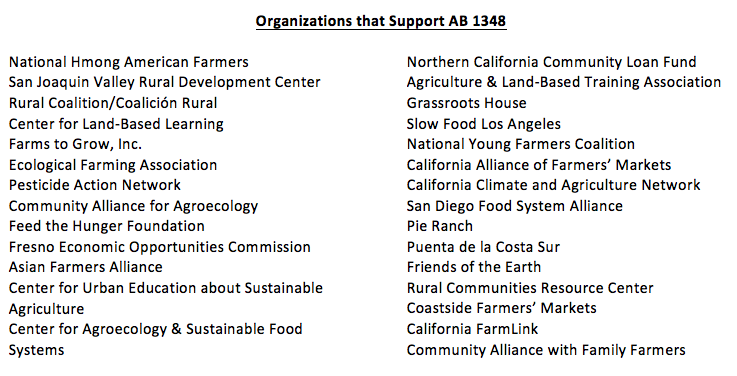