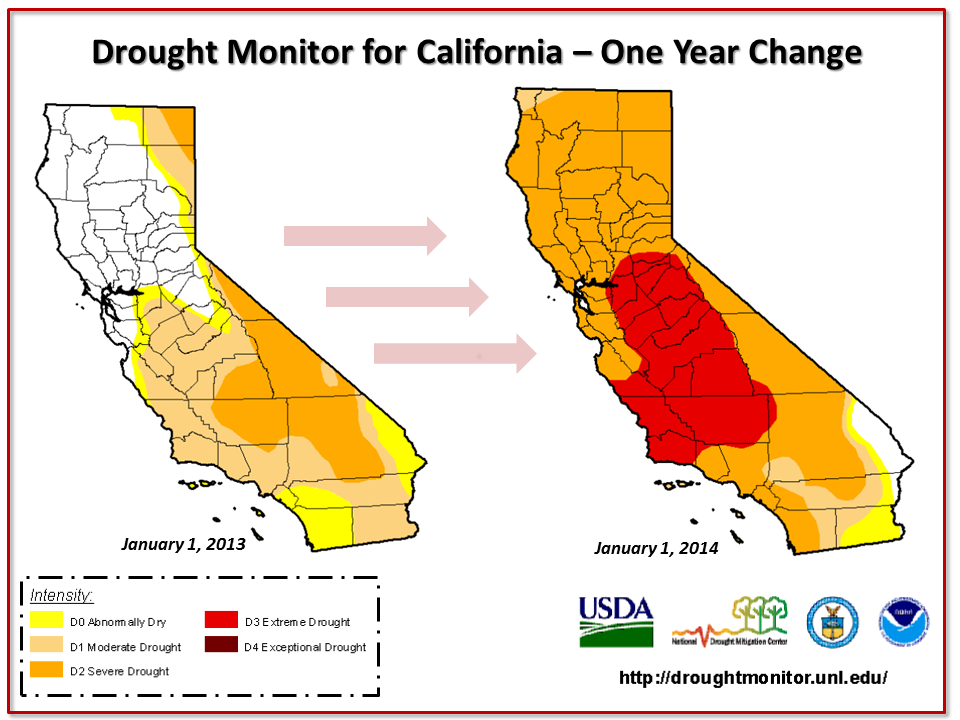 By Dru Marion and Adam Kotin

This is the first in a three-part series about the ongoing drought in California. Parts two and three will explore past droughts and our recommendations for sustainable water management practices.

Growers across California are among the first to feel the effects of the worst drought the state has seen in almost four decades. Mandated cutbacks in water distributions, along with depletions in available surface water and groundwater, are forcing farmers to dig deeper into their pockets while making tough decisions about crop planting and livestock management.

Generally, California relies on a few infrequent yet significant storms that make their way south from the Pacific Northwest during the winter months. This year, however, a warm and dry high-pressure system has lingered above the California coast since November, blocking storms that typically drop early winter precipitation across the state.

Here are some sobering numbers characterizing this drought:

For growers, the drought is already impacting management practices and costs. Ranchers are paying hundreds of dollars per day for hay and molasses to feed livestock, instead of relying on winter pastures that would usually be green and lush at this time of year. High demand for feed is driving up prices, making this short-term fix a costly endeavor. To make matters worse, wells and ponds are running dry, and some ranchers are paying thousands of dollars to haul water to their stock. Unsurprisingly, these costs are forcing some ranchers to sell animals to control their losses.

Joe and Julie Morris of Morris Grassfed in San Juan Bautista tell us they are “working on ways to convey the implications of drought on our food supply to urban dwellers so they feel the connection to our communal watersheds when it hits their wallets directly.” Their 17-year-old son suggested a ‘drought surcharge’ to beef orders to help cover the cost of alfalfa feed and irrigation.

But the prospect of continued dryness in the coming months is what is most disquieting.

“Our summer irrigation water is supplied by our large reservoir, which is typically at least refilling by January. So far this year, nothing,” says Frank Dawley of Big Bluff Ranch near Redding. “Our range situation looks similarly bleak: not much dry feed left from last season, and very, very little to show yet for this season. Is there a word for anxious optimism?”

Of course, California farmers and ranchers are no strangers to drought. The state has tremendous year-to-year variability in its precipitation, with crippling droughts making their mark in almost every decade. Climate scientists say it is still too early to know what role, if any, global warming has had in creating the current situation.

We do know from climate models that weather extremes, like drought, are predicted to increase in both frequency and severity in the coming decades. So while many farmers are scrambling just to plan for the next few months, we also have a collective responsibility to ask the hard questions about what the next few decades will look like—and how we might adapt to a world in which more frequent periods of extreme drought is the ‘new normal’.

That’s why the State of California—with input from public stakeholders like CalCAN—is preparing its ‘Safeguarding California’ update to the 2009 Climate Adaptation Strategy. This comprehensive plan provides guidance on how the agriculture sector can reduce risk and increase resiliency in the face of changing drought, storm, and heat patterns.

While there are many things individual farm operations can do to plan for this future, we also need wiser planning and management of water and natural resources. Drought is not just a farmer’s problem; a communal response is needed to maximize and protect the resources we have in times of scarcity. CalCAN believes robust technical and financial assistance for farmers to build soil health and water efficiency, along with sustainable management of watersheds, will help us all through the droughts to come under a changing climate.

To make good decisions in the future, we must also learn lessons from the past. Our next blog in this series will explore some of the previous droughts that have hit the state, what the responses were, and what they mean for future planning.