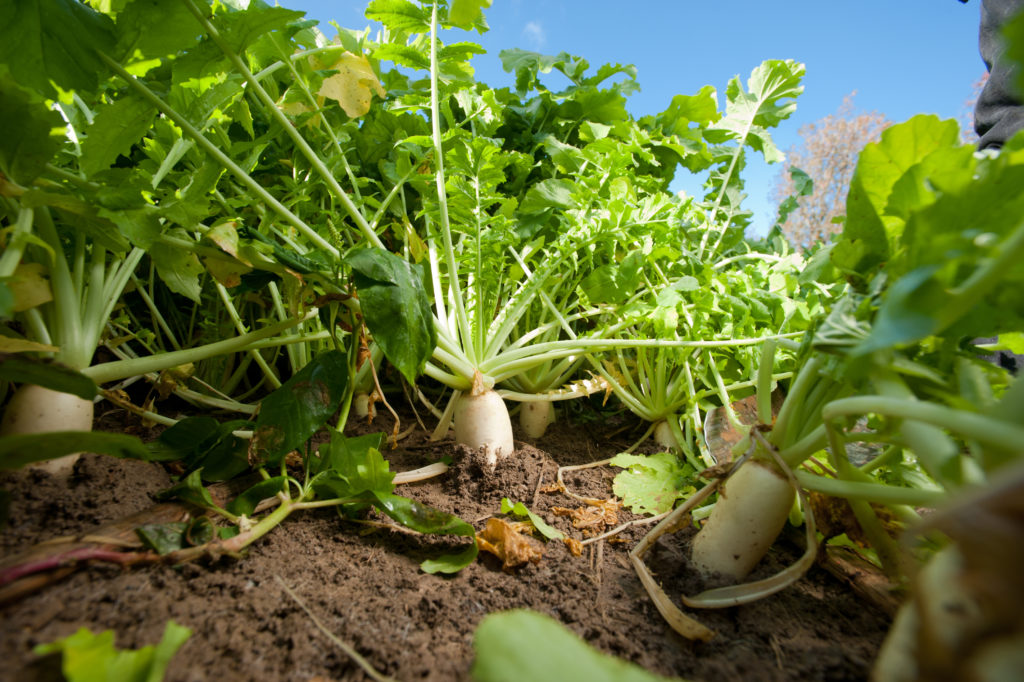 This is reposted from the National Sustainable Agriculture Coalition (NSAC), of which CalCAN is a member. NSAC advocates for federal policy reform for the sustainability of food systems, natural resources, and rural communities. See the original post.

The benefits of cover crops have long been known to farmers, and today, they are also increasingly being studied by agricultural researchers. Despite their benefits to crop yields, soil health, and farmers’ bottom lines, however, many obstacles to cover crop adoption still remain. One significant barrier for many farmers is the cost of introducing cover crops into their operations compared to the amount of time required before improved yields, reduced soil erosion, and other benefits are seen. If more farmers are to find success with cover crops, they must have ways to make cover crops pay for themselves on a tighter turn-around.

The National Sustainable Agriculture Coalition (NSAC) helped to create SARE more than 30 years ago, and we continue to advocate for robust funding for the program through the annual appropriations process. SARE is a competitive research and outreach program that advances sustainable agriculture by supporting farmer-driven research and also helps publicize the results to other farmers. SARE involves farmers and ranchers directly in research as the primary investigators or as cooperators in larger research and education projects, and it is the only USDA competitive grants research program that focuses solely on sustainable agriculture.

The SARE bulletin provides valuable information regarding the profitability of cover crops, including the reality that it can take a few years for cover crops to fully pay for themselves. While data on cover crops is still limited compared to other cash crops, the message from the research is clear: When viewed holistically, cover crops pay for themselves – and then some.

1) A holistic approach to cover crop adoption is critical. An accurate and thorough analysis of cover crops should take place over a multi-year period and be conducted through a holistic lens. A one-year cost-and-return analysis, for example, will not capture the full benefits of cover crops. Farmers who find the most success with cover crops tend to holistically implement improvements to their overall cropping system, rather than just implement and assess changes from one practice.

2) It takes time to see the benefits. Farmers tend to evaluate the return on cover crops over a multi-year timeline, similar to that of buying equipment. In some cases – such as when utilized for grazing or to control herbicide resistant weeds – cover crop benefits can be seen in the first year of use. In other situations and/or when used for other purposes, it may take three or more years to see marked results. Regardless of the practice for which they are used, the return on cover crops builds steadily year-to-year as farmer experience and soil health increase.

3) Cover crops increase overall farm resiliency. Farmers who are experienced in using cover crops note improvements in both their soil and crop performance over time. The SARE Cover Crop Survey asked farmers to compare their fields that had planted cover crops with those that did not, and the findings were encouraging. Across the board, corn and soybean yields were increased on fields where cover crops were utilized. Surveyed farmers also emphasized the ability of cover crops to increase production even following years with extreme weather, such as drought. With the impacts of our climate crisis increasingly being felt in the fields, cover crops are becoming an increasingly vital tool for increasing resilience.

Cover crop benefits have been clearly demonstrated, but farmers often wonder how to best capture and accelerate their return on a cover crop investment. The SARE bulletin outlines seven scenarios that will most likely garner a quicker return on investment. Using SARE/CTIC National Cover Crop Survey and USDA-NASS marketing data, annual cost per corn and soybean acre is projected out seven years for each of the following scenarios (also illustrated in the table below):

Weed pressure is expected to increase for farmers as the climate continues to shift. Even if cover crops cannot completely eliminate the need for herbicide application, they can reduce the number of total applications. In some cases, green plantings have been shown to reduce weed density by 90 percent in corn crops.

While the potential savings in herbicide costs will not necessarily pay for the full cost of cover crop seeding, when combined with possible yield advantages and avoiding dockage fees or even yield losses at harvest, cover cropping may provide a positive return in the first year or two of use. The bulletin points out that, when determining a financial impact, it is important to consider reduced weed seed contamination dockage at the elevator, labor hours, and equipment operating cost in addition to reduced input costs.

2) Grazing cover crops – Grazing cover crops is the most likely way to appreciate a first year return, depending on the stocking rate, grazing period length, and cost of livestock infrastructure like fence and waterers. The SARE report explains that with infrastructure already in place, one year of modest grazing will cover the cost of cover crop seed. The biggest return can be seen if the crop is established early in the fall and has fast-growing cover, such as a cereal or brassica cover crop.

Not only is grazing cover crops economically sound, it also makes sense for long-term soil health. Intensive rotational grazing has been shown to be one of the fastest ways to build soil organic matter due to intensive regrowth interval, and application of livestock manure, urine, and saliva. Combined with reduced cost of feed, higher rates of gain, and increased crop yields down the road, grazing cover crops can pay off economically within a year and then keep paying long into the future.

3) Addressing soil compaction – Compacted soil can reduce yields by as much as 20 percent, not to mention the adverse impacts on soil drainage. To remedy this, farmers may be pressured to invest in deeper tilling equipment. However, doing so increases fuel and labor costs and only yields temporary benefits. Cover crops, in contrast, are less expensive and also have the potential to produce long term benefits. If the cover crops used are deeper rooting than the cash crop, they create macropores that increases the ability of air and water to penetrate the soil. This spurs the formation of soil aggregates that help build soil structure.

Additionally, the utilization of cover crops may allow farmers to plant earlier in the spring and increase field access opportunities in the fall by building a more stable soil structure. Financially, using cover crops to address compaction can allow farmers to break even in two years for corn, and yield a net benefit in year two for soybeans.

4) Making the transition to no-till – Farmers that have used conservation tillage alongside cover crops have increasingly been transitioning to no-till or strip-till. Changing tillage systems may pose a threat to yield and profit, but the use of cover crops while making the transition can provide a buffer to the expected yield dip. No-till alone provides reduced cost in labor and machinery, but pairing no-till with cover crops substantially buffers the transition. For corn, cover crops start paying off in the second year of no-till, and will break even in the first year on soybeans.

Cover crops also increase the efficiency of rain infiltration and existing irrigation systems by creating macropores. The increased system of macropores encourages rainwater to enter the root zone, stay there longer due to decreased evaporation, keep the soil cooler, and reduce crop heat stress. In these scenarios, cover crops are likely to more than pay for themselves during drought years. When only considering irrigation challenges, cover crops may or may not yield a return during year one; however, the resiliency they allow for acts as a significant preventative investment.

6) Addressing nutrient imbalances – Cover crop adoption can play an important role in managing costs when fertilizer costs are high or manure nutrients need to be sequestered. Modest fertilizer cost savings may be possible in the first year of using cover crops, and these savings are likely to compound over time. As soil health begins to improve, nutrients are sequestered and stored in the soil while mycorrhiza (the biomicrobial, plant feeding web) is kept intact. The largest savings are possible when nitrogen-fixing legumes such as Hairy Vetch or Austrian Winter Peas are used.

SARE’s economic analysis of cover crops used when fertilizer costs are high or manure nutrients need to be sequestered show that they will break even in two years for corn, and pay off in three years for soybeans.

In addition to incentives available through federal programs, farmers and ranchers are also often able to receive additional incentives through state agriculture departments or state natural resource or conservation agencies.

Aside from the on-farm benefits summarized above, utilization of cover crops may have some not-so-obvious enterprise benefits as investors and markets shift to supply chains with ecosystem service markets. Farmers dedicated to utilizing cover crops may also have a leg-up when bidding for land to rent, as landowners may be attracted to their increased stewardship and value preservation. Wide adoption of cover crops also increases water quality, carbon capture, biodiversity, and reduces infrastructure costs – which ultimately reduces taxpayer costs.

Difficult planting, market, and political situations have made on-farm decisions especially challenging this year. The good news is, however, that opportunities for farmers to maximize their current cover crop systems are still available. Those with prevented plant acres are able to plant cover crops on those acres before, during, or after their late plant date. USDA has also moved up the emergency haying and grazing date to September 1 from November 1, allowing farmers to hay, graze, or cut cover crops without losing their 2019 prevented planting indemnity. In addition, USDA’s Risk Management Agency announced a special sign-up through EQIP in 8 targeted states to support cover crop adoption on prevent plant acres.

For farmers still struggling with the decision to cover crop, or for those who just want to learn more about cover cropping, check out this cover crop resource page from the Practical Farmers of Iowa (an NSAC member organization), USDA’s Cover Crop page, and stay tuned to NSAC’s blog for future updates and resources.