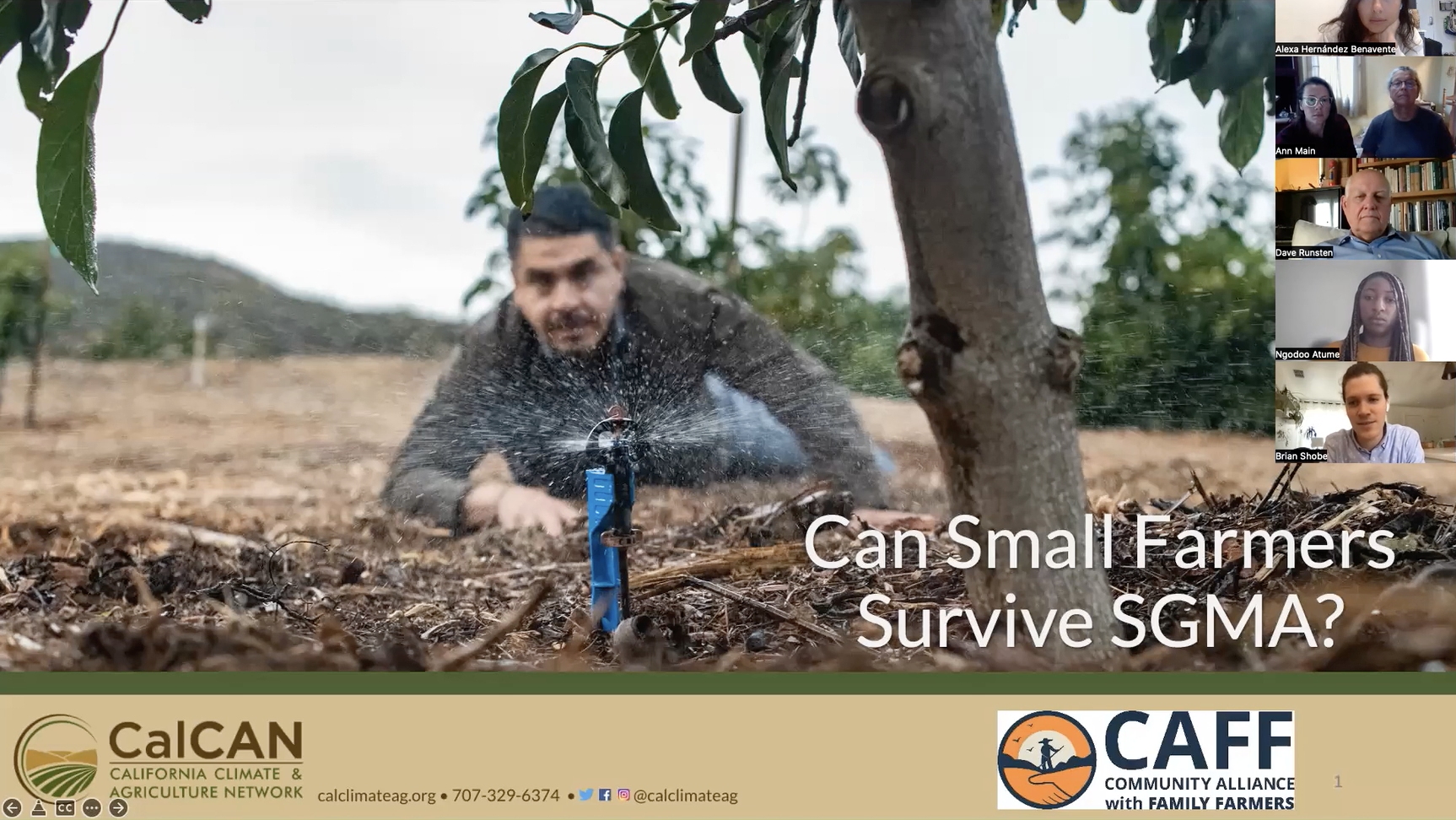 In early June, CalCAN and our coalition partner Community Alliance with Family Farmers (CAFF) hosted a webinar attended by almost 100 people that included farmers, state agency staff, advocates, researchers, and agricultural professionals. The webinar explored the unintended consequences of SGMA implementation on small farms and socially-disadvantaged farmers, as well as some possible remedies.

The Sustainable Groundwater Management Act (SGMA) was made law in California in 2014 and 2015 through the passage of several bills intended to ensure the long-term sustainability of the state’s groundwater. The law includes a provision to “identify and consider the interests of all beneficial users and uses” and included agriculture. However, it did not make any distinctions within agriculture in terms of scale or location of affected farming businesses. As plans are currently being made by local groundwater sustainability agencies (GSAs) to comply with the regulations in the most water-scarce regions of California, two unintended consequences are becoming clear:

Evidence of the first issue was offered during the webinar by Ngodoo Atume, Water Policy Analyst with Clean Water Action/Clean Water Fund. Ngodoo summarized the findings of a newly released report entitled “SGMA and Underrepresented Farmers.” They reviewed 14 Groundwater Sustainability Plans (GSPs) from water-scarce regions around California and found that few considered the impacts of their plans on farmers growing on smaller acreages, those with shallow wells, tenant farmers, and farmers from underserved communities. None of the plans reviewed included efforts to provide language and culturally appropriate outreach to engage these farmers when drafting their plans. None took into account the impact of water markets on underrepresented or tenant farmers.

The report offers recommendations to address these shortcomings, including:

Impacts on the farm

The impact of these issues was powerfully communicated by two other speakers on the panel, Annie Main of Good Humus Farm and her daughter Alison Main. Good Humus is a 30-acre farm in Yolo County that Annie and her husband started in 1976 with the intention of direct marketing diverse and organic vegetables, fruit, flowers and herbs to their local community. All three of Annie’s children are living on the farm and are partners in the business, and Alison shared her concerns about their water future. She talked about the rush to drill in their area and the influx of large export-oriented landowners planting almonds, grapes and olives in an area that historically has not been irrigated. She said that 800 wells have been drilled in the region in the past decade, which leads to feeling “very insecure and very vulnerable.” She said they are starting the summer irrigation season with a groundwater table at the level it was at the end of last year, which does not bode well for the choices ahead about which crops to water and which to leave stressed.

Dave Runsten, CAFF’s Senior Policy Analyst, rounded out the webinar with an overview of the current policy debates going on this year, as well as CAFF’s recommendations to ensure that small and underresourced farmers can survive the well drilling “race to the bottom” as well as the unintended impacts of SGMA implementation. Dave offered several ideas to mitigate the disproportionate impact of regulations on small farmers including discounts for small farmers on future water use fees or exceptions for local food producers of a certain size or type of market share (e.g. CSAs, farmers markets). Dave also talked about AB 2201, a bill being considered in the legislature this session, that would put into statute an Executive Order issued by Governor Newsom that requires Groundwater Sustainability Agencies in water-scarce basins to issue permits for agricultural wells only if they are consistent with their GSP and won’t interfere with existing wells or cause subsidence. CAFF and CalCAN are in support of AB 2201 providing that it is amended to exclude the replacement of existing wells.

If you’d like to listen to the full webinar, you can find it on the CalCAN website here.