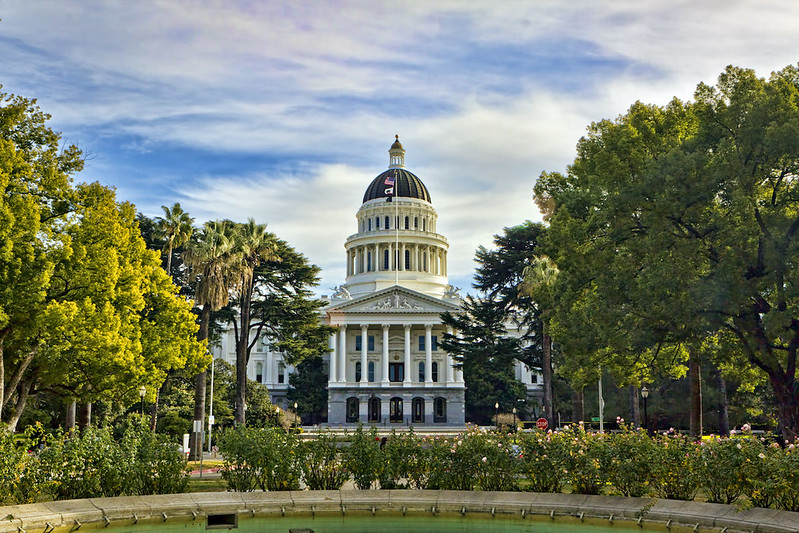 This is what happened at the CA state capitol this past legislative year:

Last week, we wrote on our blog about the state’s robust funding for climate-smart ag and other critical food system investments. Earlier this week, we wrote about the passage of AB 1757 (C Garcia), which requires state agencies to set working lands climate targets for 2030, 2038, and 2045.

Today, we’re writing to update you on the fate of some of the other bills CalCAN engaged with this year.

CalCAN supported a total of 18 bills during the 2022 legislative session, of which:

Below, we summarize some of the most noteworthy wins, partial wins, and losses. We will update this blog post after September 30th, which is the deadline for the Governor to sign or veto bills passed by the legislature.

WINS — bills that passed and are awaiting the Governor’s signature

SB 926 (Dodd) – If signed by the Governor, this bill would make the statutory changes needed to implement a Prescribed Fire Liability Pilot Program that was appropriated $20 million in 2021 to support coverage for losses from prescribed fires and cultural burning by nonpublic entities, such as private landowners and tribes. This bill was sponsored by The Nature Conservancy and supported by a coalition of conservation, agriculture, and prescribed and cultural fire groups.

AB 2146 (Bauer-Kahan) – If signed by the Governor, this bill would prohibit the sale, possession, or use of neonicotinoid pesticides (“neonics”) for most non-agricultural uses beginning in 2024. Neonics are a leading cause of bee and pollinator declines, which threatens the more than $11 billion in state agricultural production that depends on bees and other pollinators. The bill allows continued neonic use on all fruit and nut trees by certified applicators and exempts all applications made as part of CDFA’s invasive species treatment programs. This bill was sponsored by the Natural Resources Defense Council and supported by a coalition of conservation, agriculture, environmental justice, and public health groups.

AB 1902 (Aguiar-Curry) – If signed by the governor, this bill would make a number of updates to the law guiding the administration of Resource Conservation Districts (RCDs) and their relationship with the Department of Conservation. Among other things, the bill updates the scope of RCDs’ role in the state to reflect their vital on-the-ground soil, water, fire, climate, and biodiversity work. This bill was sponsored by the California Association of Resource Conservation Districts.

AB 2847 (E. Garcia) – If signed by the governor, this bill would create a temporary pilot program to provide unemployment insurance to undocumented Californians who are currently excluded from the program. The Excluded Workers Pilot Program will provide unemployed workers who are ineligible for regular unemployment insurance due to their immigration status with $300 per week for up to 20 weeks. This pilot would particularly benefit farmworkers, who often experience periods without work due to drought, seasonality, and smoke. This bill was co-sponsored by Centro Binacional para el Desarrollo Indígena Oaxaqueño and supported by a coalition of farmworkers, anti-poverty, anti-hunger, and agriculture groups.

AB 2499 (Maienschein) – This bill would have established in statute an Organic Transition Program to provide direct assistance, mentorship, and planning support to farmers and ranchers to adopt organic practices and offset the risk during the transition period, prioritizing socially disadvantaged farmers and ranchers. The bill also would have required a statewide market analysis of the organic sector to provide organic farmers with the information they need to take advantage of the growing consumer demand for organic. This bill was sponsored by CalCAN coalition member California Certified Organic Farmers (CCOF) and supported by a coalition of agriculture, environmental justice, conservation, and climate groups. While the bill and its carefully crafted programmatic framework died in the Senate Appropriations Committee, the budget contained significant funding to support the organic transition. Stay tuned to our blog for more on that story and progress soon!

AB 2649 (C. Garcia) – This bill would have set a goal for California to sequester through nature-based solutions at least 60 million metric tons of carbon dioxide equivalent annually by 2030 and 75 million metric tons annually by 2035. The bill would have also required the Natural Resources Agency, in collaboration with CDFA and other agencies, to establish pathways to achieve this goal and update the pathways every five years. This bill was co-sponsored by the Climate Center, Carbon Cycle Institute, and California Association of Resource Districts, and was supported by a coalition of agriculture, conservation, climate, environmental justice, public health, and faith groups. While this bill died in the Senate Appropriations Committee, some of the bill’s language, minus the specific carbon sequestration targets, was included in AB 1757 (C. Garcia), which passed and which we wrote about earlier this week.

SB 977 (Laird) – This bill would have established a new California Conservation Ranching Incentive Program at the Wildlife Conservation Board (WCB) to assist ranchers to implement practices that maintain and improve the health and resiliency of rangelands throughout the state. The program would have provided direct financial and technical assistance to ranchers and land managers to plan, implement, and monitor regenerative agricultural practices like those promoted by Audubon’s Conservation Ranching initiative. This bill was sponsored by Audubon California and supported by a coalition of conservation, agriculture, water, and climate groups. While the bill and its thoughtful programmatic framework died in the Assembly Appropriations Committee, a budget bill explicitly included “prescribed wildland grazing” and “prescribed grazing infrastructure” as eligible projects in the Fire Prevention Grants Program, which received $80 million.

AB 2412 (Villapudua) – This bill would have codified the State Water Efficiency and Enhancement Program (SWEEP) into law, expanded the types of water conservation projects eligible in the program (e.g. surface water efficiency and groundwater recharge projects), and prioritized financial assistance in the program for small and underserved farmers. The bill included much of the language from a bill CalCAN sponsored in 2020 (AB 2482 by Asm Stone) that also tried to codify the SWEEP program. While the bill died in the Assembly Appropriations committee, one of the key provisions of the bill will soon be implemented in a new SWEEP pilot program intended to better support surface water efficiency projects and historically underserved regions.

LOSSES – bills that died (for now; there’s always next year!)

AB 2133 (Quirk) – This bill would have increased the state’s greenhouse gas reduction goal for 2030 from a 40% reduction to a 55% reduction. This bill was one of a number of last-minute climate bills championed by Governor Newsom and was supported by a coalition of climate, conservation, and agriculture groups. The bill passed the Senate but fell four votes short of a majority in the Assembly.

SB 260 (Wiener) – This bill would have required the California Air Resources Board (CARB) to develop regulations by 2024 to require businesses that make more than $1 billion and operate in California to annually and publicly disclose their greenhouse gas emissions beginning in 2025. This bill was sponsored by California Environmental Voters and supported by a coalition of climate, labor, public health, and environmental justice groups. The bill passed the Senate but fell four votes short of a majority in the Senate.

AB 2201 (Bennett) – This bill had a number of twists and turns through the legislative process, and CalCAN’s position evolved accordingly. The bill, at its core, would have required groundwater sustainability agencies in medium and high-priority basins to provide written approval for permits for new groundwater wells and certain alterations to existing wells to ensure the new or altered wells would be consistent with the local groundwater sustainability plan. CalCAN supported the overall intent of the bill and advocated for and won amendments to the bill to exempt shallow wells at the highest risk of going dry, well maintenance, and pump replacement and maintenance, as well as an amendment to require outreach about the new rules to small and underserved farmers. However, some of those amendments were blocked later in the process. After passing the Senate with controversial amendments, the bill ultimately died in the Assembly without a floor vote. The bill was sponsored by the Community Water Center and supported by a coalition of water, environmental justice, and conservation groups.