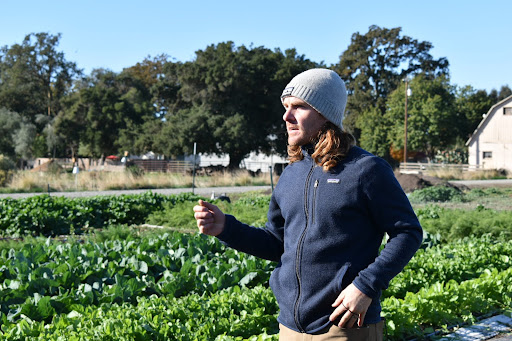 On a bright and chilly Sunday last month CalCAN hosted a daylong farm tour as part of its 2022 summit. As with prior years, the available spaces on the farm tour were snapped up quickly and it’s no wonder why: the day gave us the chance to connect directly with farmers and agricultural operators on the land they steward. What better way to understand the challenges farmers and graziers face than to see first-hand the places they grow food and provide grazing services?

Our first stop was at the Center for Land Based Learning (CLBL) in Woodland, CA. CLBL’s mission is to to inspire, educate, and cultivate future generations of farmers, agricultural leaders and natural resource stewards. We heard from two sets of the beginning farm operations participating in CLBL’s farmer incubator program: Paul Boulware of Picnic Table Farm and Little Gem Farm, operated by Monica Quezada and Sara Rosenberg. Both farmers use ecological, regenerative practices on small-scale diversified vegetable operations.

Monica and Sara of Little Gem Farm shared their challenges with growing delicate night shade vegetables (tomatoes, eggplant, peppers) in the face of the Valley’s extreme heat. One way they found to help mitigate the effects of high temperatures on sensitive crops: cultivating the fast-growing moringa plant at the ends of beds to shade other crops. Plus, they are able to sell the moringa’s edible leaves to their customers too. Paul from Picnic Table Farm shared with us how he brought in over 100 tons of compost on the half-acre section of CLBL’s incubator farm that he operates on. As with Little Gem Farm, Paul also faced heat-related issues at his farm and used shade structures to protect crops during the summer months.

For our second stop of the day we headed to the Cache Creek Conservancy where we heard from Shannon Waldron and Christian Cain from Perennial Grazing about their regenerative grazing operation. While contract targeted grazing is a relatively small segment of California agriculture, it’s being recognized as a powerful tool for reducing fire risk given the reality of a future that will continue to see increasingly frequent and destructive fires. Perennial Grazing uses a mix of sheep and goats for their work and their regenerative grazing practices foster wildfire resilience and have a number of ecological and climate resilience co-benefits, including: promoting native plant species, higher levels of soil carbon sequestration, and increased moisture and nutrient retention. Fun grazing fact: grazing animals and grasslands evolved alongside each other and saliva from sheep that is deposited on certain grasses during grazing actually stimulates new plant growth in a way that mechanical cutting doesn’t.

We also learned about how Cache Creek Conservancy is using prescribed fire and cultural fire alongside grazing on the land they steward. We got to see the effects of recent burns during our visit which includes the site of an ongoing research project that UC Berkeley PhD student Ameen Lotfi is conducting to better understand the separate and combined effects of grazing and prescribed burns.

Our third and final stop was at a large-scale almond and walnut orchard operated by Bullseye Farms. After soil cracking became an issue that lowered yields, Bullseye turned to cover cropping as a way to restore soil health. Bullseye is one of many agricultural operators that have participated in CDFA’s Healthy Soils Program to support their transition to more sustainable practices. We heard from Bullseye representatives that cover cropping was especially useful with their walnut orchards and that the practice has also meant less water run off, softer soils, and less pesticide and herbicide use. Due to differences in harvesting methods, almonds initially presented some challenges surrounding cover cropping, but newer harvesting equipment that effectively separates cover crop residue has allowed them to continue the practice of winter cover cropping on both fields going forward.

Across the three stops of CalCAN’s farm tour we saw three very different agricultural operations up close. All three are grappling with the challenges of stewarding complex ecosystems in the wake of accelerating climate impacts. By connecting with farmers and graziers we can better understand the problems they face while helping lift up and promote sustainable approaches to create a more climate resilient agricultural sector.