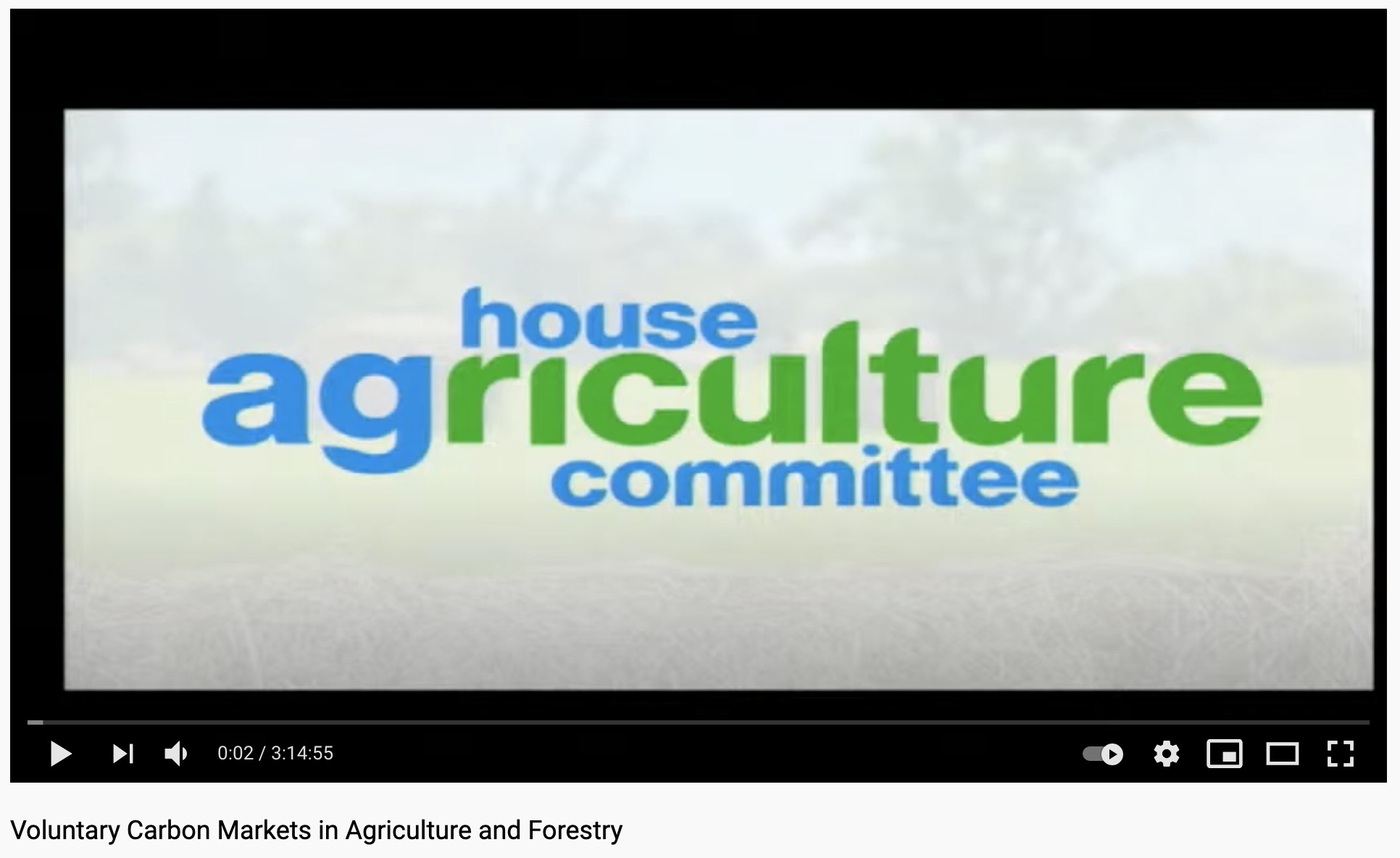 September 21, 2021 – CalCAN Policy Director Jeanne Merrill delivered the following testimony for a House Agriculture Committee Hearing on “Voluntary Carbon Markets in Agriculture and Forestry.” You can watch a recording of the hearing here and find more information about the other speakers here.

My name is Jeanne Merrill and I am the Policy Director for the California Climate and Agriculture Network. We are a coalition of the state’s leading sustainable and organic agriculture organizations. Since 2009, we have worked to advance agricultural solutions to the climate crisis at the state level and at the federal level, working in partnership with the National Sustainable Agriculture Coalition.

Thank you for the opportunity to address the important issue of carbon markets and their potential role in supporting farmers in mitigating and adapting to climate change.

Today, I will speak to the California experience of the carbon markets and our state-funded, grant-based Climate Smart Agriculture programs. I will begin my remarks with an overview of the original market efforts in this space.

Farmers and ranchers have an important and unique role to play in addressing climate change.  Agriculture can and must be part of the country’s efforts to reduce greenhouse gas emissions, increase carbon sinks and become more resilient. Effective policy tools exist to help farmers achieve these goals.

However, since 2003, carbon markets have proved themselves an inadequate tool to reach the diversity of farmers and ranchers we must reach. Simply put, carbon market approaches at the voluntary and compliance levels have consistently failed to deliver on climate solutions in agriculture on any meaningful scale, leaving the vast majority of farmers and ranchers without adequate resources to address the climate crisis.

The Chicago Climate Exchange was the first national, voluntary effort to put a carbon market in place. The Exchange set up a market for offset credits generated by farmers and ranchers whose practices reduced greenhouse gas emissions and increased carbon sinks on agricultural lands—practices such as rotational grazing, conservation tillage, and prairie plantings. Companies and local governments would buy those credits as a way of offsetting their own greenhouse gas emissions.

But by 2010, the exchange had collapsed. The carbon market was swamped with offset credits from willing farmers, but it didn’t have enough buyers. As a result, the price of the carbon credits went from a high of roughly $7 to just 5 cents per metric ton of CO2 equivalent. In December 2010, the Chicago Climate Exchange closed its doors, leaving farmers and ranchers without support for their carbon farming practices.

The next, significant effort to create a carbon market came from California. In 2012, as part of its climate change law, the state launched a cap-and-trade program, requiring large greenhouse gas emitters to participate. Now, nine years later, there are still very few ways for farmers to earn carbon credits, and they include installing dairy digesters and taking up certain rice management practices, both aimed at reducing methane emissions. But with a low carbon price and high transaction costs for farmers, only the dairy digester projects have sold carbon credits, largely because of other state financial support for the projects. Despite the seven years it took the industry, working with environmental partners and the state, to develop the rice protocol for the carbon market, the state’s rice producers have stayed out of the California carbon market.  It just doesn’t make financial sense.

Instead of relying on the carbon market, starting in 2014, the state of California launched its first grants-based programs to pay farmers and ranchers who take up farm management practices that reduce greenhouse gas emissions and increase carbon sinks. California became a pioneer for what is now called “Climate Smart Agriculture” programs. The programs bypass the complexities of the carbon market, including price volatility, offering farmers and ranchers technical and financial assistance to develop their climate-friendly management projects. The programs are modeled after USDA’s farm bill conservation programs.

The first Climate Smart Agriculture programs focused on three areas: drought and farm resiliency, farmland protection from urban sprawl, and the development of dairy digesters. Grant funds were made available to farmers to improve their irrigation management systems to save water and energy and reduce related greenhouse gas emissions. Recognizing that protected farmland on the urban edge of our cities and towns could reduce sprawl development and greenhouse gas emissions associated with passenger cars, the state also invested in conservation easements to permanently protect agricultural lands at risk of development. Finally, looking at potent methane emissions from dairy manure, the state launched its dairy digester program to reduce emissions from large dairy farms.

The second wave of state investment in new Climate Smart Agriculture programs came in 2017 with the creation of the Healthy Soils and the Alternative Manure Management (AMMP) programs. Under the former, farmers and ranchers are paid to practice soil management and farmscape practices that sequester carbon and reduce greenhouse gas emissions. The latter focuses on dry manure management practices for dairies and other livestock operations to reduce methane emissions, including composting manure.

Farmer response to the state Climate Smart Agriculture programs has been considerable with application requests far exceeding available funding, even during the difficult times of the pandemic. For example, despite the shelter-in-place orders, which had greatly disrupted agricultural markets in March 2020, more than 600 farmers and ranchers applied for the state’s Healthy Soils Program. A total of $22 million in projects were funded, bringing the total to nearly 700 funded Healthy Soils projects statewide.

However, state initiatives offer a better value for farmers to meet their basic costs in transitioning to new farming methods. For example, one California Healthy Soils grant recipient, a farm in Butte County in Northern California, will sequester 110 metric tons of carbon and will receive a grant worth $64,000 from the state. Under the new voluntary carbon market program, the same farm would receive just $1,650 for those same 110 metric tons of carbon sequestered. That is a stark difference.

The state’s program bases its funding awards on the costs of installing or shifting to new farm management practices – e.g. the cost of cover crop seed, compost, mulch, etc. – and the carbon market approach is based largely on what the buyer is willing to pay for a metric ton of carbon equivalent, even if that is well below what the farmer may need to cover his or her costs.

To summarize, carbon markets have failed to deliver on their promises:

Time is ticking. According to the Intergovernmental Panel on Climate Change (IPCC), we have only until 2030 to bend the curve on global greenhouse gas emissions to avoid the very worst of climate change impacts. We cannot waste time on complex and ultimately ineffective approaches like carbon markets. We have tried for nearly 20 years to make carbon markets work for agriculture and they have failed.

We have time-tested and proven farm bill conservation programs that can deliver the research, technical assistance, and financial assistance that farmers and ranchers need to reduce their greenhouse gas emissions, improve their carbon sinks and build their resilience to greater weather extremes. And we can do this while supporting farm viability and profitability, reaching a diversity of producers and agricultural communities. We are doing that in California through our Climate Smart Agriculture Programs. We modeled our efforts off of USDA’s Natural Resource Conservation Service programs, adding in a focus on climate change outcomes.

The Agriculture Resilience Act (ARA) and related legislative efforts that focus on scaling up and refining farm bill conservation programs to address the climate crisis can provide the necessary resources for farmers to address climate change challenges, allowing our agricultural industry to thrive.

Thank you for the opportunity to speak today.