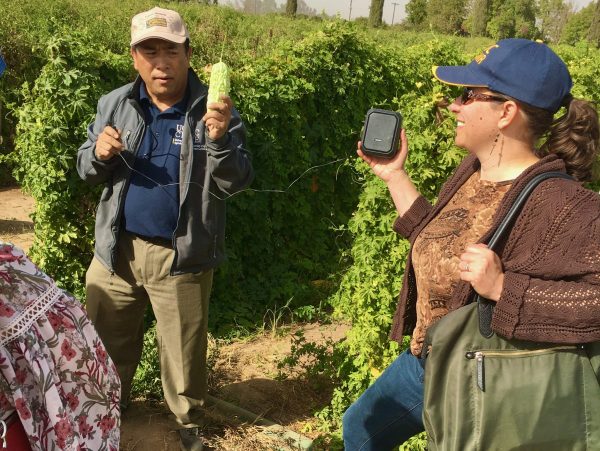 Michael Yang, Small Farms and Specialty Crops Hmong Agricultural Assistant (left) and Ruth Dahlquist-Willard, PhD, Small Farms Advisor in Fresno and Tulare Counties (right), are some of the 33 technical assistance providers who will receive funding to assist farmers and ranchers in the upcoming rounds of the Climate Smart Agriculture Programs. Here, Michael is explaining the benefits of bitter melon on a recent tour of a small-scale, diversified vegetable farm in Fresno County.

The coronavirus pandemic is taking a toll on state revenues, with Governor Newsom’s administration projecting a $54 billion state budget deficit through the summer of 2021. The Governor’s May revise budget proposes significant cuts to education, social services, and environmental protection to meet the state’s requirement of a balanced budget. The loss is state revenue also puts the state’s efforts to reduce greenhouse gas emissions and keep the state on track to meet its climate change and related public health goals in jeopardy.

Among the programs cut in the Governor’s budget proposal is the State Water Efficiency and Enhancement Program (SWEEP), the climate smart agriculture program. Back in January the Governor proposed to fund SWEEP, as part of his new Water Resiliency Portfolio, with $20 million in General Fund dollars. With state tax receipts down significantly new General Fund expenditures have been reduced or eliminated in the May revise budget. However, the SWEEP funding cut comes at a significant time for the state’s farmers as California may be headed into another prolonged drought.

While the Governor proposes to maintain the Greenhouse Gas Reduction Fund (GGRF) dollars for the state’s climate change programs, he has proposed a “pay as you go” system and a prioritization of those programs that could result in no funding for the Healthy Soils Program and Alternative Manure Management Program (AMMP) in the upcoming budget year, which depend on annual appropriations from the GGRF.

With the uncertainties of the pandemic and its impact on greenhouse gas emissions, carbon market pundits are raising concerns that the state’s cap and trade auctions may not perform well this year, resulting in fewer dollars deposited into the GGRF. California allocates roughly 65 percent of the GGRF dollars on a continuously basis to a number of climate change programs with a small but significant fraction going to the Sustainable Agricultural Lands Conservation (SALC) program. The remaining 35 percent of GGRF goes to annually appropriated programs, like Healthy Soils and AMMP.

Under the Governor’s plan, those annually appropriated programs would be prioritized with wildfire, safe drinking water, AB 617 (community air pollution), and FARMER (ag equipment upgrades) programs funded first.  Any remaining funds would be dispersed to the other annually appropriated GGRF programs. However, given anticipated carbon market shortfalls its unlikely remaining programs would see much funding in the 2020-21 budget year.  This is especially difficult for Healthy Soils and AMMP, both of which are oversubscribed with a backlog of hundreds of farmer applications.

The Governor’s budget proposal also withdraws funding for what was his newly proposed Climate Catalyst Fund, which would have provided low-interest loans for climate projects. The Governor has also withdrawn his climate resilience bond proposal that was to go before the voters in the fall. However, the administration does not appear to have entirely walked away from a possible bond measure as discussions continue in and outside of the administration and in the legislature about a possible economic recovery/ resilience bond measure.

While the legislature must pass a budget by June 15th, the legislature will not take up the final GGRF expenditure until after the budget is passed. Similarly, we expect the bond measure discussions to continue into June and perhaps later into the summer.  Given that, CalCAN and our partners, like you, will have time to weigh in on the final GGRF plan and bond proposals.  Stay tuned for details on how you can voice your support for climate smart agriculture.