Are Superweeds Really the Problem? 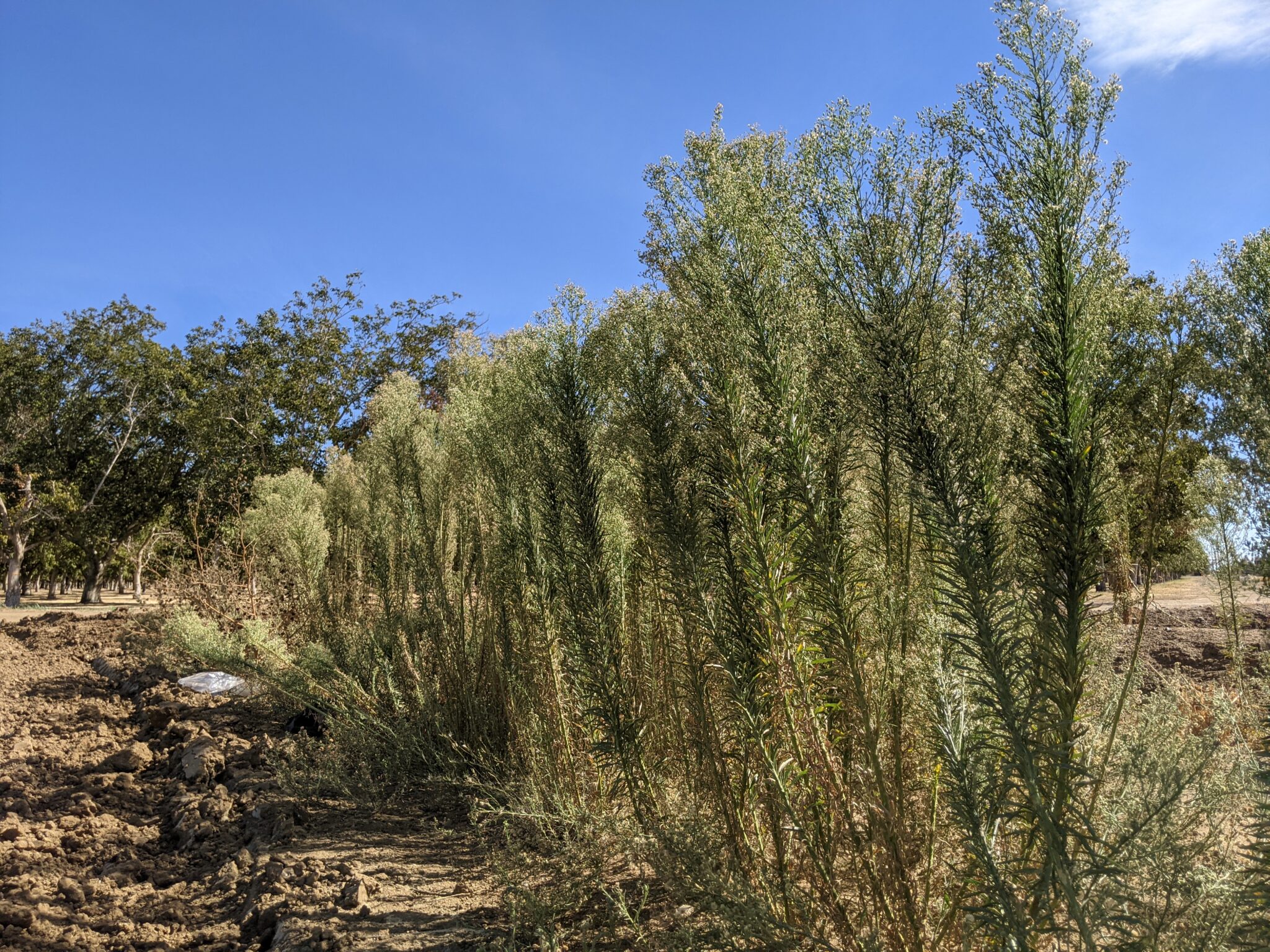 Are Superweeds Really the Problem?

This blog was authored by Rex Dufour, Regional Office Director of the National Center for Appropriate Technology (NCAT) and CalCAN advisor. NCAT staff serve farmers and ranchers through training, technical assistance, and support related to sustainable agriculture production. Read more on their website.

The New York Times recently published an article on “superweeds”—weeds that have developed resistance to one or more herbicides.  The article was disappointing, in that it focused on chemical herbicides, and only mentioned alternative weed controls in the last two paragraphs of this long article. The Midwest was highlighted in the article, as was the problem of Palmer amaranth, also known by a common name of pigweed.  The emergence of pigweed as a superweed is a classic example of the pesticide treadmill combined with a system of subsidies which disincentivize climate-smart farming practices.  Complex rotations, which for most farmers in the Midwest would mean adding a small grain to the typical corn-soybean rotation, are rare.  In the corn-soybean system, pigweed was controlled for years by glyphosate, as most farmers were planting “Roundup-Ready” corn and soybeans.  When glyphosate-resistant pigweed inevitably started appearing in their fields, many farmers started planting seeds with “stacked” herbicide resistance—so the corn and soybeans are resistant to both glyphosate and dicamba, a 2nd herbicide.  But dicamba has a problem with “fuming”—that is, vaporizing, and then traveling long distances, which results in non-target plants being damaged or killed.  This has created many problems with neighboring farmers who are not using the “stacked” seeds.  Overdependence and overuse of these chemical herbicides is essentially a breeding program to create herbicide-resistant weeds.  But are superweeds a problem in California? Does what happens in the Midwest stay in the Midwest?

Well, the answer to that is, “yes, and no”.  Let me explain.  The problem with over-reliance on “silver bullet” herbicides is just that: too many farmers applying too much herbicide on too much acreage. It’s convenient, it’s relatively cheap (until superweeds appear, or one considers the externalized costs to human and environmental health of over-using these herbicides). These silver bullet herbicides create intense selection pressures on weeds.  After decades of applying glyphosate, we’ve selected for pigweeds (and other weed species) resistant to this chemical.  And there appears to be cross-resistance to other chemical herbicides, according to the article in the New York Times.  It ain’t rocket science—it’s simply how biology works.

Well, back to the California context.  We grow well over 400 different crops here in California, which is about 200 times the number of crops grown in most of the Midwest.  Each crop has its own set of weed problems, but they’re generally a different bunch of weed species, especially when comparing weeds of annual crops to weeds of perennial crops.  However, that’s not to say that we haven’t developed our own superweeds.  Marestail, also known as Horseweed (Conyza canadensis), is a problematic weed in vineyards, especially in the vine-row.  This weed, which grows in all the lower 48 states, can grow 6-10 feet tall, and develop up to 200,000 wind-driven seeds.  It’s also glyphosate resistant—whether that was “home-grown” resistance developed in California, or imported from the Midwest is beside the point now.  It’s here and we have to deal with it.

It’s perhaps better in the long run that all farmers develop a more integrated approach to managing weeds.  Silver bullet, herbicide-based approaches work for a short time, but create longer-term problem weeds that are more difficult to manage with chemicals.    Using an approach that integrates ecological approaches to weed management, combined with some mechanical options, is not only a more sustainable method, but has soil health benefits that can help the farmer’s bottom line in this era of climate change.

A treadmill off-ramp: One farmer’s story

Adam Chappell is a farmer from the Midwest taking an alternative approach. A little over 10 years ago, Adam Chappell’s farm in eastern Arkansas was in trouble.  He and his brother Seth were having a very hard time controlling pigweed on their 8,000 acres, spending up to $150/acre just to control this one weed!  So Adam, as a last resort, tried, after a bit of research, planting a cover crop of cereal rye.  The roller-crimped cover crop helped reduce the pigweed, and after historic flooding in 2011, followed by the hottest year on record in AR (2012), the land that they’d cover cropped produced a crop.  The land they didn’t cover crop didn’t produce a crop.  Ever since then, he’s been experimenting and expanding his use of cover crops.

Adam has adopted a range of climate smart practices.  He uses no-till, has a diverse rotation that includes cover crops, keeps a living root in the soil throughout the year, and is now in the process of integrating livestock onto his farm.  He’s noticed that since he’s been investing in his soil, the “roots explode out of the [cotton] seed”—root growth is much better in his healthier soils.  His insecticide costs are about $3/acre compared to the state average of $36/acre. Using cover crops has reduced the frequency of irrigation by 50%. He has increased his infiltration rate (the rate of water draining into his soils) from 0.5-1”/hour to 6”-8”/hour by using climate smart practices. This is important as the intensity of rainfall rates increases .  As Adam notes, he’s made higher yields of cotton prior to cover cropping and using other climate smart practices, but his profits are much higher than they were because his input costs, including pesticides, fertilizers, seed costs, irrigation, fuel, machinery and labor, are so much lower.  These practices are not only good for the farmer, they’re good for his neighbors and folks that live downstream.  Less runoff causing flooding in his neighbors’ fields, more water, and cleaner water entering the water table, and much less chemicals (fertilizers, insecticides, and herbicides) impacting non-target organisms, including humans.

As Adam and other climate-smart farmers have found in annual crops, crop rotation is a viable and profitable option. Other options for weed management are higher seeding rates for cash crops (or cover crops) to establish an earlier and denser canopy to smother the weeds earlier, tillage (which doesn’t support soil health, but can be used in a limited fashion), and cover crops, which can also be used to smother and out-compete weeds and has the benefit of increasing soil health.  Diverse crop rotations can help avoid the build-up of a particular weed species in the soil seed bank and provide the opportunity to leave some additional plant material in the field.

The straw from a small grain crop, for example, can be left in the field to provide a mulch, which protects the soil from temperature extremes, as well as providing protection from rainfall impacts, which helps prevent a crust forming on the soil.  It’ll likely require a no-till drill to plant the next crop, but that mulch will help prevent weeds, allow soil to absorb rainfall more readily, and will add organic matter to the soil – a win-win-win.  Yes, the farmer will lose the income from selling bales of straw, but they’ll be investing in their soil health and reducing weed competition, and not breeding herbicide-resistant weeds.

Though the considerations and techniques vary, conservation tillage and cover cropping are possible in California too. One of the most dedicated researchers and farmer advisors about how to make it work here is Jeff Mitchell at UC Davis Cooperative Extension who founded the Conservation Agriculture Systems Innovation program. He works with both conventional and organic producers to figure out how to manage weed control without herbicides or excessive tillage.

To read more about farmers fighting superweeds without herbicides, see this article published by Civil Eats earlier this year.