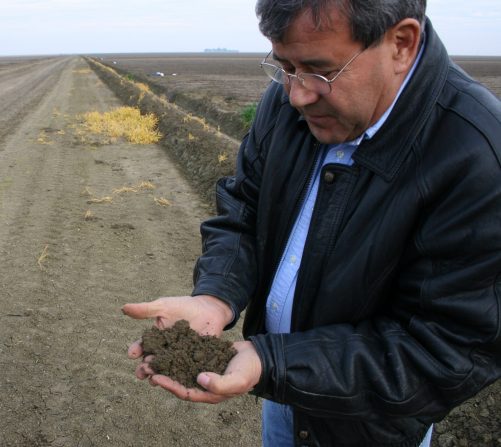 It addresses the role of land in driving global warming and highlight opportunities to reduce emissions from deforestation and agriculture. Importantly, the report spotlights the promise of carbon sequestration, where farmers and ranchers can play an important role in drawing carbon back down out of the atmosphere and storing it in our forests and soils. And it conveys a sense of urgency about the need to transform how we grow food to make the most of the opportunities in agriculture and forestry for curbing climate change.

In California, farmers and ranchers are grappling with the impacts of climate change in the form of exacerbated water scarcity challenges, unpredictable and extreme weather events and temperatures, historically devastating wildfires, and shifting pest and disease patterns.

Increasingly, California farmers are also stepping up with strategies that reduce greenhouse gas emissions and store carbon in soil and plants—many of which also enhance their resilience, save them money, and improve the health and wellbeing of their families and communities. An opinion column was recently published in the New York Times by Alan Sano, one of CalCAN’s farmer partners in the San Joaquin Valley. It is available online, and is reproduced below.

Farmers Don’t Need to Read the Science. We are living it.

— By Alan Sano who owns and operates Sano Farms.

read the new report from the United Nations warning of threats to the global food supply from climate change and land misuse. But we don’t need to read the science — we’re living it.

Here in the San Joaquin Valley, one of the world’s most productive agricultural regions, there’s not much debate anymore that the climate is changing. The drought of recent years made it hard to ignore; we had limited surface water for irrigation, and the groundwater was so depleted that land sank right under our feet.

Temperatures in nearby Fresno rose to 100 degrees or above on 15 days last month, which was the hottest month worldwide on record, following the hottest June ever. (The previous July, temperatures reached at least 100 degrees on 26 consecutive days, surpassing the record of 22 days in 2005.) The heat is hard to ignore when you and your crew are trying to fix a broken tractor or harvest tomatoes under a blazing sun. As the world heats up, so do our soils, making it harder to get thirsty plants the water they need.

The valley’s characteristic winter tule fog is also disappearing, and winters are getting warmer. Yields of many stone fruits and nuts that feed the country are declining because the trees require cool winters and those fogs trap cool air in the valley. Warm winters also threaten the Sierra Nevada snowpack, which provides 30 percent of California’s water. We had a good wet winter this year, but a few years ago the snowpack was at its lowest level in 500 years. We also worry that last year’s record California wildfires, which blanketed the valley with smoke for weeks, might become the new normal. I don’t get sick much, but that summer I had a hard time breathing because of the congestion in my lungs.

The latest report from the United Nations’ Intergovernmental Panel on Climate Change reinforces our anxiety. It warns of declines in food yields, instability in food supplies, increased soil erosion and threats to water availability in coming decades. The global food supply system is a big contributor of the greenhouse gases that are warming the planet, the report added. As The Times reported on Thursday, without “action on a sweeping scale” the warming climate will intensify “the world’s droughts, flooding, heat waves, wildfires and other weather patterns” and speed up “the rate of soil loss and land degradation.”

The good news is that farmers can be part of the solution. At our 4,000-acre farm, where we primarily grow tomatoes, we started planting winter crops that require less water, like garbanzo beans and garlic. When necessary, we leave some fields unplanted for part of the year to save water for our high-value almond and pistachio trees. We switched to drip irrigation long ago, which efficiently delivers water to crops at their roots under the soil, protected from the hot sun.

We try to take great care of our soil’s health, and we keep learning how to do it better. A living soil with lots of organic matter absorbs and holds more water and nutrients, retains more topsoil and grows healthier plants that survive increasing pressures from pests and diseases.

After harvesting our fall crops, we now use cover crops that return carbon and nitrogen to the soil and nourish the microbes and fungi essential for a living soil ecology. The plants and soil organisms work together to pull carbon out of the atmosphere and draw it down into the root zone. We minimize disturbance of our land by decreasing tillage, which protects these microorganisms and keeps carbon in the soil, where it belongs. Rather than being a source of carbon emissions, farms could store carbon where it’s needed to grow food.

This has been good for our business, too. We spend less on water, energy and fertilizer and are getting good yields.

We and other farmers here are constantly experimenting with new approaches to keep soils healthy. We’re part of a work group at the University of California, Davis, Cooperative Extension, where we learn about the science and share successes and failures with other farmers. Research and education like this are essential for farmers who are too busy growing food to keep up with the latest science and technologies.

The science is clear that the challenges facing agriculture will only become more difficult, and in unpredictable ways. Farmers will need more financial incentives to adopt practices that encourage healthy soils and water conservation, like government grants or cost-sharing arrangements. That kind of support would lower the barriers of cost and risk that farmers now face in trying new, climate-friendly ways of farming. With state-of-the-art science, innovation and sound public policy, farmers here and elsewhere in the United States can work to make sure this latest dire warning about the warming planet does not become self-fulfilling.