Healthy Soils and SWEEP Application Period to Start Soon, with New Application and Priorities for Disadvantaged Communities and Farmers/Ranchers

Photo above: Jeanne Merrill, CalCAN’s Policy Director at the far left, speaks at a meeting of the Environmental Farming Act Science Advisory Panel.

Last week, the California Department of Food and Agriculture (CDFA) revealed a new-and-improved online application for the Healthy Soils Program (HSP) and State Water Efficiency and Enhancement Program (SWEEP), and announced it will be starting its application period for the programs sometime in November.

The announcement occurred at the October 18 meeting of the Environmental Farming Act Science Advisory Panel (EFA-SAP); the Panel advises CDFA on the programs. CDFA announced and proposed a few other changes to the programs, summarized below.

New applications and priorities for disadvantaged communities and farmers and ranchers

CDFA did a brief walkthrough of its new online applications for both HSP and SWEEP. Given the brevity of the presentation, we were not able to fully evaluate its functionality, user-friendliness, or the extent to which CDFA has reduced the number of questions or attachments required. But on the surface, there appear to be a number of improvements compared to CDFA’s prior application, including:

CDFA also explained how it plans to prioritize severely disadvantaged communities (SDACs) and socially disadvantaged farmers and ranchers (SDFRs), per the requirements of Proposition 68 (the funding source for SWEEP’s $20 million and $10 million of HSP’s funding) and the Farmer Equity Act (AB 1348).

In order to meet Proposition 68’s requirement that 20 percent of the funds serve SDACs (communities with a median household income less than 60 percent of the statewide average), CDFA plans to score applications from those communities first and automatically award them if they meet a minimum qualifying score.

If CDFA fails to meet the 20 percent requirement, then they can lose up to half of their funding for the programs. To assist with meeting Prop. 68 requirements, CDFA will prioritize technical assistance in those communities.

CDFA also plans to score applications for socially disadvantaged farmers and ranchers, as defined in the Farmer Equity Act (AB 1348), and automatically award them if they meet a minimum qualifying score. After scoring and awarding applications that qualify under those two categories, CDFA will proceed to score and award the rest.

Previously, CDFA had proposed splitting its $15 million allocation to the program into two funding rounds. CDFA has now decided to make available the entire $15 million in November – double the amount made available in its first round of the program.

In response to consistent feedback from HSP awardees, CDFA is also planning to increase the compost payment rate for compost application to cropland or grassland from $35/dry ton to $50/dry ton.

After more than a year spent discussing new practices for the program, the EFA-SAP voted to approve the list of practices to add to the program below. 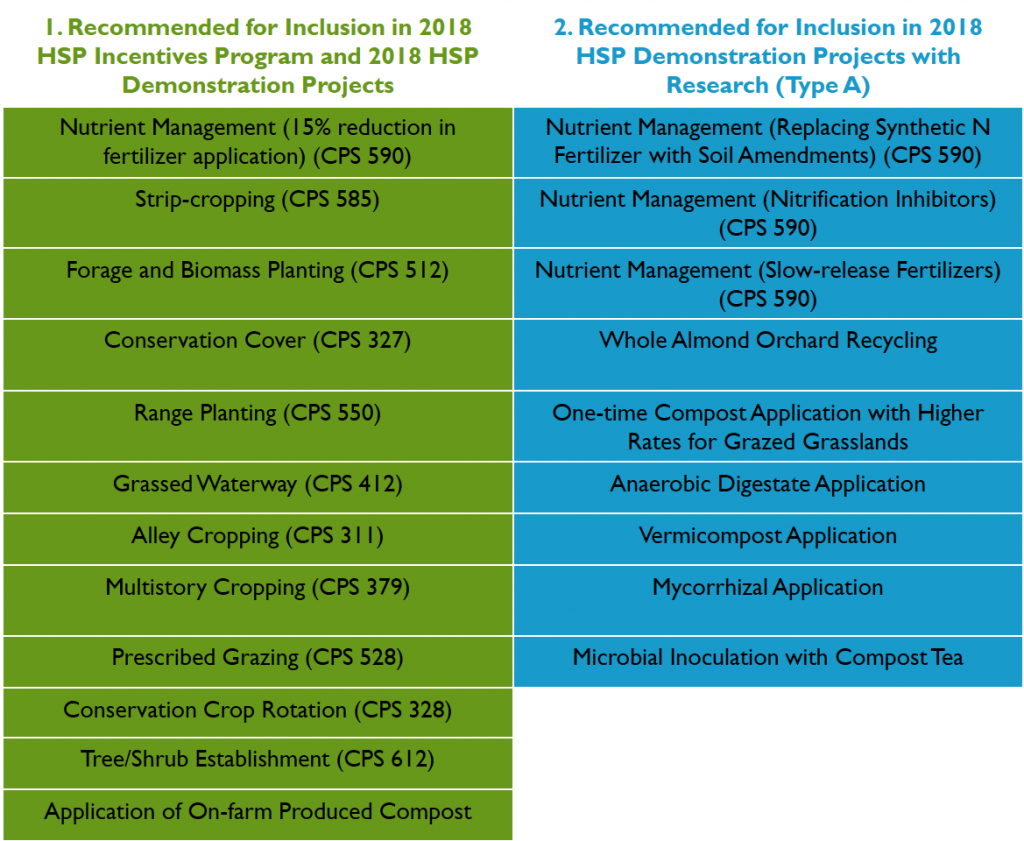 Thankfully, the EFA-SAP upheld the integrity of the program by rejecting a proposal from CDFA staff to include Nitrification Inhibitors and Slow-Release Fertilizers in the Incentives Program – two fertilizer additives which have no soil health benefit and thus do not meet the basic requirement for the program.

CalCAN and many other stakeholder groups strongly opposed CDFA’s proposal in multiple letters and comments over the past year, including our latest on October 15.

Unfortunately, due to CDFA’s mishandling of the public process and confusion about what the EFA-SAP could amend and vote on, the EFA-SAP approved the two fertilizer additives for Demonstration Type A (include GHG impact quantification) projects. Funding any such projects would be a misuse of Healthy Soils Program funds on multiple levels.

Comments regarding the draft RGAs can be submitted to cdfa.oefi@cdfa.ca.gov no later than 5:00 p.m. PT on Thursday, November 8, 2018.