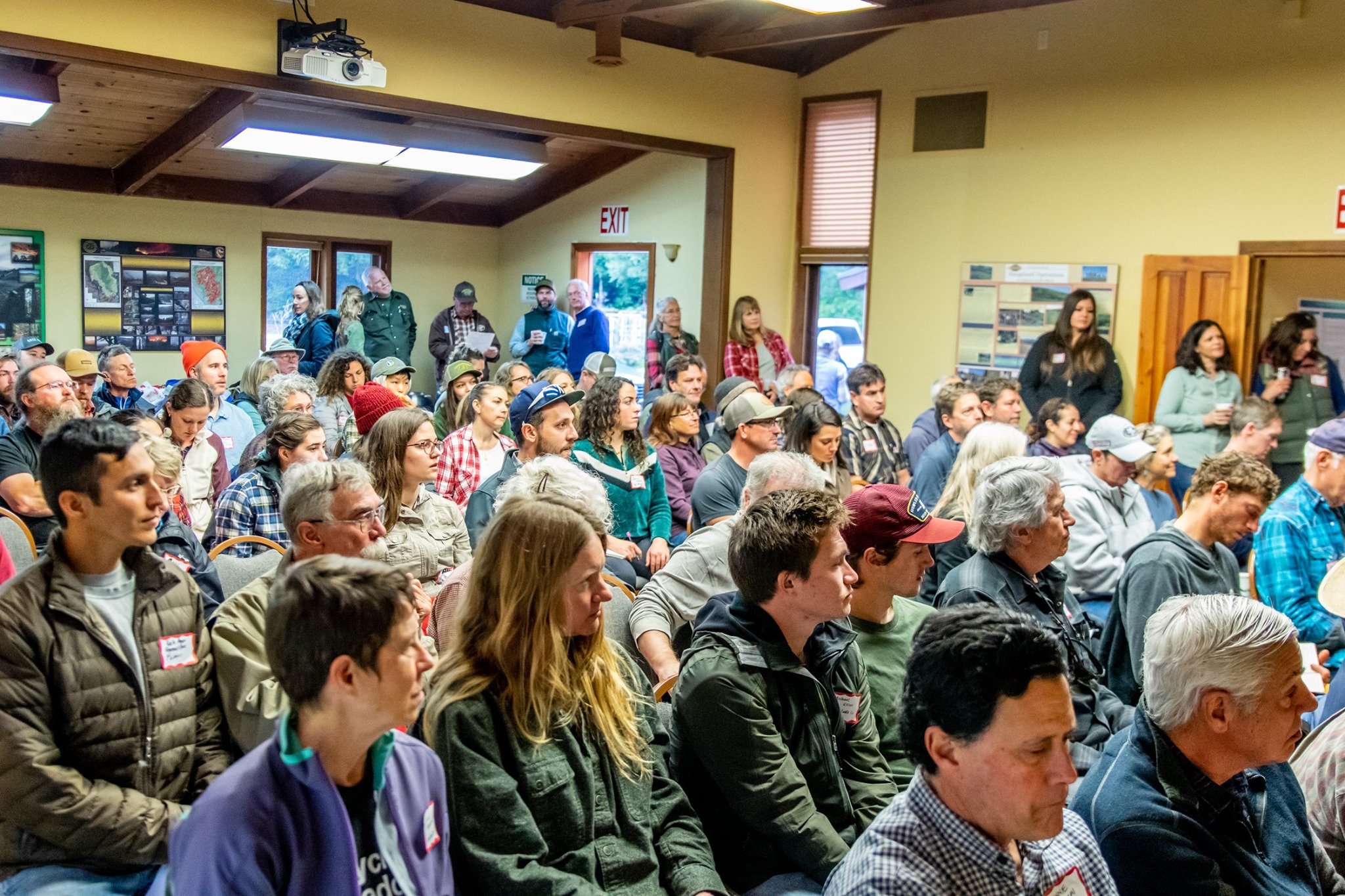 Three CalCAN staff attended this year’s EcoFarm Conference—Executive Director Renata Brillinger, Associate Policy Director Brian Shobe and Communications and Operations Coordinator Becca Lucas. Organized by the Ecological Farming Association, one of CalCAN’s founding coalition members, this was the 40th annual conference and in recognition of this milestone, many conversations over the three days contemplated EcoFarm’s present and future direction.

We were impressed with the breadth of climate-related topics, including a deep dive into farmer-led research on no-till practices on organic farms, cover cropping in orchards, and agricultural land conservation. This is clear evidence that the EcoFarm community is concerned about the climate crisis for a wide range of reasons and actively engaged in doing their part. Many of the keynote speakers spoke to the urgency of climate change and its relationship with soil and human health, holding up climate smart agriculture as an integral part of an ecological, regenerative and just food and farming system. Over the past several years, EcoFarm has been making conscious efforts to address diversity, equity and inclusion as a vital component of a sustainable food system. This has been reflected in the increased numbers of speakers of color and more racial diversity among participants. In sessions that CalCAN staff attended, there were discussions and reflections on the need to do more  to integrate social justice across the full range of topics and tracks.

Renata organized and moderated an interactive session called “Climate Policy: What Do Farmers Want?” that included a state and federal policy briefing by Dave Runsten, Policy Director with the Community Alliance with Family Farmers (CAFF) as well as an overview by Ernesto Meza of the National Young Farmers Coalition of young farmer perceptions and responses to climate impacts. The room was overflowing and attendees were keen to share their experiences with coping with climate change and ideas for advancing policy—evidence of the EcoFarm community’s engagement as advocates and systems thinkers.

Brian and Becca along with staff from fellow coalition member CAFF worked the crowd throughout the conference to collect signatures on a national sign-on letter urging Congress to take action on climate change and include resources for agriculture. Farmer organizations across the country, members of the National Sustainable Agriculture Coalition, are collecting thousands of signatures to build support for future federal climate legislative campaigns.

We were extremely pleased to join the EcoFarm community in recognizing and celebrating the leadership and commitment of two of CalCAN’s advisors and models. Scott Park, who farms over 1,500 organic acres near Meridian, CA, was chosen as one of three to speak on the Successful Farmer panel. Scott puts soil health at the center of his priorities and takes a practical long view on how to manage land to maximize soil organic matter, healthy soil structure and maximal water infiltration and retention—as well as creating a soil carbon bank. After 40 years of farming, he is still experimenting and humbly learning from mistakes that he shared with the thousand people in the audience.

Ward and Rosie Burroughs and their children co-own and operate a suite of farm business that produce a range of organic products including almonds, grassfed dairy, chickens and much more. They are leaders in their community, politically engaged, committed to supporting their children in growing and thriving in farming, and pioneers on the farm. They have installed renewable energy, transitioned entirely to organic production, installed miles of hedgerows, produce their own compost, graze cattle and chickens in their orchards in the spring, and consider themselves soil farmers. They were recognized with the lifetime achievement Sustie Award.

EcoFarm is an annual opportunity for farmers, activists, food systems leaders, environmentalists, health and justice educators of all stripes to come together, share ideas and challenges and build solidarity. At CalCAN, we are grateful to be part of the conversation.