On Sept. 19th, the California Public 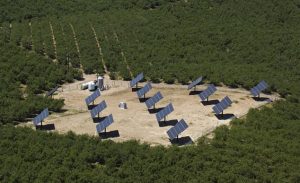 Utilities Commission (CPUC) cleared the way for new rules that will make it easier for California farmers, school districts, businesses and others making use of the state’s Net Energy Metering (NEM) program to produce renewable energy. The CPUC Commissioners directed the public utilities to put in place procedures that allow NEM customers to aggregate electric meters on their property and use excess clean energy generated at one meter to be credited against other meters.

Farmers and ranchers typically have multiple meters on their property.  Current California law prohibits the power generated from an on-site renewable facility to be counted against other meters.  Consequently, farmers would have to install a separate facility for each meter, which is extremely inefficient and cost prohibitive, limiting their ability to cost-effectively generate renewable energy.

The change came about because of the 2012 passage of a bill, Senate Bill 594, authored by Senator Lois Wolk (D-Davis). The California Climate and Agriculture Network (CalCAN), a coalition of sustainable agriculture organizations, supported the bill.

California farmers produce more renewable energy on their farms and ranches than their counterparts in other states, but obstacles still exist. The CPUC action moves us closer to clean, renewable energy- powered farms throughout California.

The CPUC action was taken after they conducted a study that found that implementing the NEM rule change would have no impact on electricity rates.

“It’s going to be easier and more affordable for growers like me to produce renewable energy,” said Jon-Mark Chappellet of Chappellet Vineyard and Winery.  “Not only will more farmers and ranchers be able to cut their energy costs, but they’ll be reducing the carbon footprint of their operations.”

This improvement to the NEM program will move California closer to meeting the Governor’s goal of 12,000 megawatts of distributed renewable energy generation in the state.